Nine reception centers have been set up along the border in Poland, which already has a community of 1.5 million Ukrainians.

The Polish government says 100,000 people have crossed the border into Poland from Ukraine since Russia’s invasion began on Thursday.

“From the onset of warfare in Ukraine through today, along the entire border with Ukraine, 100,000 people have crossed the border from Ukraine into Poland,” Deputy Interior Minister Pawel Szefernaker told reporters on Saturday in the border village of Medyka, South Poland.

He said 90 percent of refugees have places to go in Poland, such as the homes of friends or family, but that the remainder are seeking help at nine reception centers set up along the border.

Most of the arrivals were women and children as well as men outside the 18-to-60 age range who face conscription in Ukraine, he added. 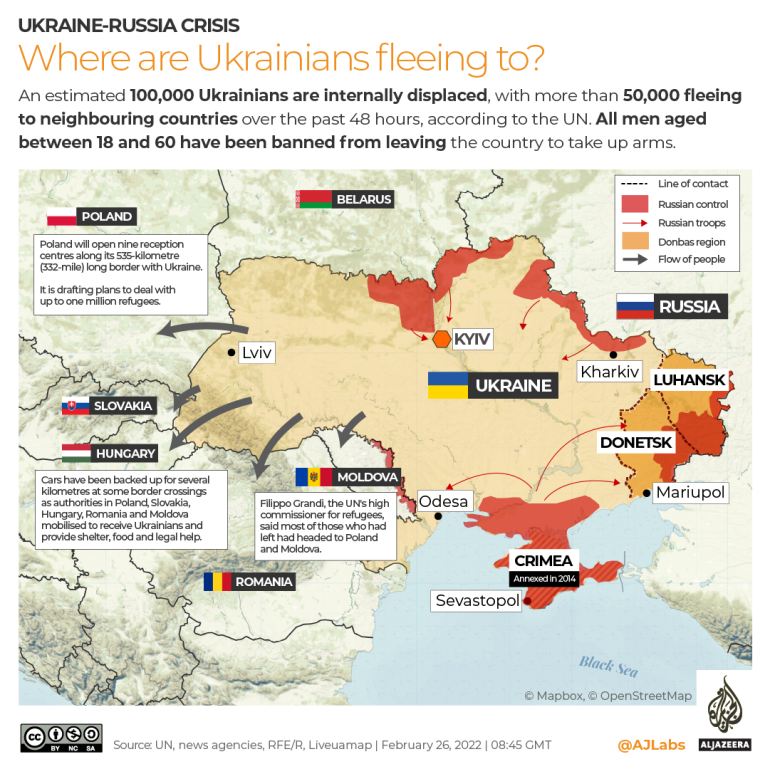 The centers offer meals and medical care, a place to rest as well as any necessary information.

The head of the Polish border guard, Tomasz Praga, added at the press conference that on Friday alone nearly 50,000 people had crossed into Poland from Ukraine.

Szefernaker said his country can process up to 50,000 refugees from Ukraine at the border every day.

Poland, which was already home to an estimated 1.5 million Ukrainians before Russia’s invasion and which has expressed steadfast support for Ukraine, has so far seen the bulk of those fleeing Ukraine cross into its territory.

“The latest update is that almost 116,000 have fled to neighboring countries since February 24 – mainly Poland, Hungary, Moldova, Slovakia and Romania,” the United Nations refugee agency UNHCR tweeted on Saturday.

“Numbers are rising,” it added.

The UN said the number of people seeking refugee outside of Ukraine to other countries could rise to five million.