Amazon recruited 15,000 more British workers than it expected to last year as demand for home deliveries and digital services boomed during the pandemic.

The surge in jobs at the US tech giant took overall staff numbers to 70,000 in the UK across warehouse and delivery teams, as well as its corporate and R&D functions.

Amazon, which has a market capitalization of $ 1.5tn, has engaged in a global hiring spree in an effort to maintain delivery speeds and power the next stage of its enormous growth. The company has also pointed to its role as a huge creator of jobs as its market power has come under scrutiny from regulators across the world.

Amazon had previously announced that it would create 10,000 roles in the UK last year, with a target to reach 55,000 permanent employees.

The total of 25,000 new UK jobs makes it a record year for employment at the US group. It comes just a day after British retailer Tesco said it would cut more than 1,000 jobs as it faced rapidly rising labor costs.

Many of the roles were created to give permanent jobs to the thousands of people who had joined Amazon on fixed-term contracts since the start of the pandemic, with the US group fighting to hire staff to meet demand, especially in the run-up to Christmas.

Amazon opened a parcels center and four fulfillment centers last year, and expanded its delivery station network. Pay for operations roles has risen to £ 11.10 an hour in Greater London – up from £ 10 in June last year – and roughly £ 10 an hour in other parts of the UK.

A sign-on bonus of up to £ 3,000 was offered at a number of locations to attract new permanent and seasonal workers last year when the combination of Covid-related absences, Brexit and a tight labor market caused a shortening of staff for many companies. 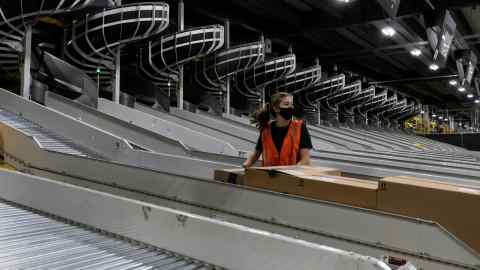 Amazon will announce plans on Wednesday to create 1,500 apprenticeships in the UK in 2022, including over 200 degree-level roles and for more than 40 different schemes.

The British government is expected to reveal plans this week to help “level up” regions of the UK, including ways to drive further job growth, in a long-awaited white paper.

Kwasi Kwarteng, the UK’s business secretary, highlighted that most of Amazon’s workforce was located outside London and the south-east.

The company said it had rolled out more than 1,000 apprenticeship roles in 2021, with a separate 1,000 training to become HGV drivers during a period where distribution networks were under strain.

Total directly incurred taxes reached £ 492mn in 2020, from £ 293mn in 2019, although the majority of this was employer taxes. Amazon’s fourth-quarter results are expected this week.