This article is an on-site version of our The Week Ahead newsletter. Sign up here to get the newsletter sent straight to your inbox every Sunday

Hello and welcome to the working week.

The northern hemisphere is heading towards the spring equinox next weekend with longer days and warmer temperatures to lift the spirits. And goodness knows we need it. So how about a week for alliances?

Firstly, a military one. From Thursday, Nato will be on the march. Cold Response 2022 is a series of Arctic military exercises in Norway and the surrounding seas. These will be defensive exercises, but it will illustrate some of NATO’s firepower with about 30,000 troops taking part from more than 25 countries.

Neighboring Finland and Sweden, which are not part of NATO but where public pressure to join is rising, will also be involved. Of course, these long-planned exercises have taken on a new significance with recent events. Back in November, Russia was invited but the Kremlin declined.

Nato member states have also been providing much-needed weapons to the Ukrainians – as this excellent Big Read explains, while UK foreign secretary Liz Truss argues that the alliance should raise defense spending to meet the biggest shift in security threat since 9/11. Nato defense ministers will gather in Brussels on Wednesday to discuss what further steps to take in relation to the Ukraine crisis.

So much for war. The coming days will also see commemorations that highlight how nations – even those with difficult histories – can work together and how cultures can be shared peacefully.

The Commonwealth of Nations is not without controversy – it is after all almost entirely made up of the former territories of the British empire. Questions are also raised about its effectiveness – some Brexiters still cling to the idea that trade with Commonwealth countries could replace that lost from leaving the EU, but they are a dwindling band.

However, it is the Commonwealth’s achievement in building co-operation between diverse cultures that will be commemorated this week with a ceremony in London’s Westminster Abbey. Queen Elizabeth, the Commonwealth’s head who recently recovered from Covid-19 and will turn 96 next month, was due to attend but will not now over concerns that she might not travel comfortably to the service.

Thursday is St. Patrick’s day, a chance to celebrate for the Irish diaspora, who have perhaps done more than any other people to blend with nations across the world. In these dark days, it will feel good to celebrate such bonds.

If you want to reach out across the borders and share your views on The Week Ahead, drop me a line at jonathan.moules@ft.com. But for now, here are the upcoming economic and corporate events.

Interest-rate decisions will be the headline economic news this week. The US Federal Reserve and Bank of England are both expected to raise their base rates by 25 basis points, while the Bank of Japan holds off from tightening for now. 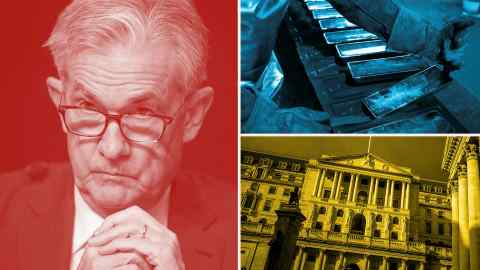 Fed chair Jay Powell is a supporter of Greenspan gradualism but all the monetary policy committees convening this week will be wary of killing the golden goose of economic recovery while trying to tame the inflation beast. War in Europe has made this already tricky balancing act a degree harder.

The reality is that the Ukrainian conflict has upended the hopes for a post-pandemic recovery. Fears of worsening living standards in developed economies, with the knock-on effects on consumer spending, have got a degree worse with additional damage caused by trade embargoes on Russian energy – although not all believe that oil price rises could further stoke inflation. We will get some clarity on this from data released this week.

Power – the electric kind – will be a theme among the corporate results. It is not just that there are a number of energy providers – E.On, Enel and RWE – but it is also of concern to those that are betting their future on replacements to fossil fuel machinery.

German carmaker Volkswagen will be updating progress on its drive to electric vehicles – and there have been bumps on the road. Chief Executive Herbert Diess has made it his mission to take on Tesla in the electric race by committing € 52bn to develop battery-powered models. However, a more pressing issue is the impact of the Ukraine crisis on supply chains, with Diess saying last week that the Russian war was doing more damage to his company than the pandemic.

Here is a more complete list of what to expect in terms of company reports and economic data this week.

Finally, here is a rundown of other events and milestones this week.

Recommended newsletters for you

Trade Secrets – A must-read on the changing face of international trade and globalization. Sign up here

The Road to Recovery – Covid’s impact on the global economy, markets and business. Sign up here