Apple Inc. is working on a subscription service for the iPhone and other hardware products, a move that could make device ownership similar to paying a monthly app fee, according to people with knowledge of the matter.

The service would be Apple’s biggest push yet into automatically recurring sales, allowing users to subscribe to hardware for the first time – rather than just digital services. But the project is still in development, said the people, who asked not to be identified because the initiative has not been announced.

Apple shares climbed to a high session after Bloomberg reported on the news Thursday and closed up 2.3% at $ 174.07. Though the stock is still down 2% for the year, Apple has now posted eight straight days of increases – its longest streak since November.

Adopting hardware subscriptions, akin to an auto-leasing program, would be a major strategy shift for a company that has generally sold devices at full cost outright, sometimes through installments or with carrier subsidies. It could help Apple generate more revenue and make it easier for consumers to stomach spending thousands of dollars on new devices.

Already, the iPhone is Apple’s biggest source of sales, generating nearly $ 192 billion last year – more than half of the company’s revenue. 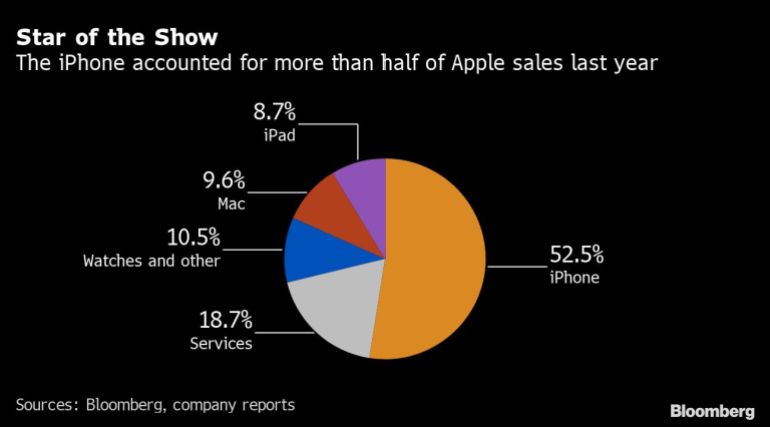 A spokeswoman for Cupertino, California-based Apple declined to comment on the company’s plans.

The idea is to make the process of buying an iPhone or iPad on par with paying for iCloud storage or an Apple Music subscription each month. Apple is planning to let customers subscribe to hardware with the same Apple ID and App Store account they use to buy apps and subscribe to services today.

The program would differ from an installment program in that the monthly charge would not be the price of the device split across 12 or 24 months. Rather, it would be a yet-to-be-determined monthly fee that depends on which device the user chooses.

The company has discussed allowing users of the program to swap out their devices for new models when fresh hardware comes out. It historically releases new versions of its major devices, including the iPhone, iPad and Apple Watch, once a year.

Apple has been working on the subscription program for several months, but the project was recently put on the back burner in an effort to launch a “buy now, pay later” service more quickly. Nonetheless, the subscription service is still expected to launch at the end of 2022, but could be delayed into 2023 or end up getting canceled, people said.

Bloomberg reported last year that the company has been working on a “buy now, pay later” service for all Apple Pay transactions.

The company has had preliminary discussions internally about attaching the hardware subscription program to its Apple One bundles and AppleCare technical support plans. Apple launched the bundles in 2020 to let users subscribe to several services – including TV +, Arcade, Music, Fitness + and iCloud storage – for a lower monthly fee.

The subscriptions would likely be managed through a user’s Apple account on their devices, through the App Store and on the company’s website. It would probably also be an option at checkout on Apple’s online store and at its physical retail locations. Apple accounts are typically tied to a user’s credit or debit card.

The iPhone maker wouldn’t be the first company to push hardware subscriptions. Peloton Interactive Inc. recently started testing a subscription service that lets consumers lease bikes and fitness content for between $ 60 and $ 100 per month. Google also has tried a similar approach with its Chromebook laptops, targeting corporate customers.

And Apple has offered several installment programs in the past to split up the cost of devices, though not with a subscription model.

In 2015, the company launched the iPhone Upgrade Program, financed through Citizens One Personal Loans, that let users spread the cost of an iPhone over 24 months and upgrade to a new model every 12 months. It also lets Apple Card users divide the cost of an iPhone or Apple Watch over 24 months or an iPad or Mac over 12 months. Wireless carriers offer several monthly installment programs as well.

The new approach could make existing services less appealing. A subscription program tied to an Apple account would probably be simpler to manage than a carrier program or even the installment plans for the Apple Card.

Some on Wall Street have previously urged Apple to switch to a subscription model. Sanford C. Bernstein & Co. analyst Toni Sacconaghi pitched the idea of ​​hardware subscriptions in 2016, saying at the time that it could help Apple get to a $ 1 trillion market valuation. Apple hit that milestone without embracing the approach – it’s currently worth $ 2.84 trillion – but Sacconaghi recirculated the report on Thursday.

Compared to Starbucks coffee or a New York Times subscription, the iPhone is a bargain, he said.

“Many customers would struggle to think of a single possession they use more than their iPhones,” he said. “Moreover, the cost of the iPhone is a relative bargain versus other services for which consumers willingly pay.”