Asia-Pacific equities edged higher on Wednesday, recovering slightly after a sell-off spurred by concerns over a potential conflict in Ukraine pushed the S&P 500 into correction territory.

Hong Kong’s Hang Seng index rose 0.6 per cent on Wednesday, while China’s CSI 300 index of Shanghai- and Shenzhen-listed stocks climbed 1 per cent. Markets in Japan were closed for a national holiday.

The lift for Asian equities came after the S&P 500 closed 1 per cent lower on Tuesday, leaving the US stock benchmark down more than 10 per cent from its most recent peak after Russia’s President Vladimir Putin directed his military to enter Ukraine’s rebel-held Donetsk and Luhansk regions.

That move was followed by a flurry of sanctions from western nations, with US announcing measures targeting two of Russia’s largest financial institutions as President Joe Biden accused Putin of beginning an “invasion” of Ukraine and warned that Washington was prepared to take further action.

But analysts said the market response to announcements from Biden and other western leaders was underwhelming. 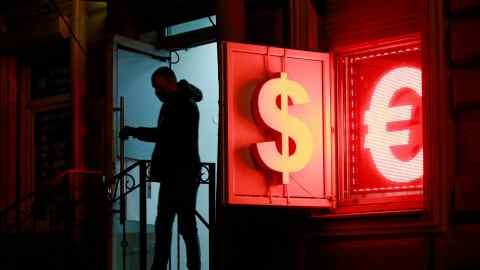 “There has been quite a muted market reaction to the announcements of sanctions on Russia by the US and Europe,” said Robert Carnell, chief Asia strategist at ING. Carnell noted US equities had posted losses but added that the falls “were small compared to some recent moves.”

Oil prices were also steadying after wild swings on Tuesday that took Brent crude, the international benchmark, to a high of $ 99.50 a barrel as traders grappled with the possibility of disrupted supply from Russia.

On Wednesday, Brent crude was trading flat at $ 96.80, leaving the international oil benchmark up almost 4 per cent over the past three days and on a course for its largest weekly gain since early January.

Futures pointed to a slight recovery for US equities when trading begins on Wall Street, with the S&P 500 set to rise 0.5 per cent. Euro Stoxx 50 futures tipped European shares to climb about 0.5 per cent as well.

In currencies, the New Zealand dollar rose as much as 0.7 per cent to a five-week high of $ 0.6777 against its US counterpart after the country’s central bank raised rates 0.25 percentage points and signaled more tightening was on the way.