Bayer has threatened to suspend crop supply sales to Russia next year unless the country stops its attacks on Ukraine.

The German drug and agrochemical conglomerate, a leading seed and crop treatment supplier, said it was considering halting the sale of essential farming inputs to Russia, despite such a potentially leading move to further volatility and increases in global food prices.

Bayer said it had already provided essential products to Russia for this year’s growing season in an attempt to ease pressures on global food supply, but would make a decision on 2023 crop supplies to Russia depending on the situation in Ukraine.

“We will closely monitor the political situation and decide on supplies for 2023 and beyond at a later stage, depending on Russia stopping its unprovoked attacks on Ukraine and returning to a path of international diplomacy and peace,” the company said in a statement.

Russia is the world’s largest exporter of wheat and along with Ukraine accounts for about a third of total exports. It is also a leading producer of other grains and sunflower oil with a long list of developing countries which rely on supplies from both it and Ukraine.

Due to their importance in the international grain trade, the two countries have been lucrative markets for companies in the agricultural sectors, including fertilizer manufacturers, seed and crop treatment companies as well as grain traders.

International food and aid organizations have been extremely concerned about the impact of the war in Ukraine with many low income countries flying on Russian and Ukraine for food supplies. Russia also provides food aid to some countries.

Bayer’s announcement follows statements by Cargill, which said it would continue operations in Russia but scale back its activities and had stopped investments. The US-based agricultural trader processes wheat, corn, barley and sorghum, as well as sunflower oil for the Russian and international markets, and it said food should “never be used as a weapon”.

Rival trader Archer Daniels Midland is to scale down operations in Russia that are not related to the production and transport of essential food commodities and ingredients. 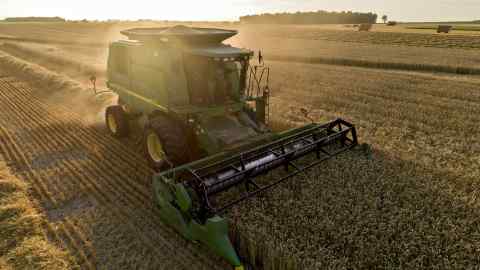 Bayer added that its seeds and agricultural inputs business was ready to support Ukrainian farmers for this year’s planting season, which will come to an end in a few weeks.

The Leverkusen-based group is stopping all non-essential business in Russia and Belarus, although it will ensure continued access to health and agriculture products for now.