Media mogul Silvio Berlusconi has dropped his long-term bid to become Italy’s next president, just as the country is ready to elect a head of state for its notoriously divisive political system for the next seven years.

In a long-awaited resignation statement, the 85-year-old Berlusconi insisted he had enough support to win Italy’s top job.

But the four-time former prime minister, who was convicted of tax fraud in October 2012, said he had decided to withdraw his name from consideration so that lawmakers across the political spectrum could choose a less divisive candidate.

Berlusconi’s term has been tainted by sexual scandals and alleged corruption, undermining his quixotic quest to promote himself as a unifying national father figure.

“I have decided to take another step towards national responsibility,” Berlusconi wrote on Facebook.

Many people in parliament are worried about Draghi’s election [for the presidency] means there are new elections in the spring and they absolutely want to avoid that.

Although right-wing parties have vowed to support Berlusconi’s candidacy, left-wing parties have called his potential rise to the presidency unacceptable, warning that it could lead to the collapse of Italy’s fragile Italian national unity government led by Prime Minister Mario Draghi.

Berlusconi was “difficult to sell, and he obviously came to the conclusion that this could not be done,” said Daniele Albertazzi, an expert on Italian politics and right-wing populism at the University of Surrey.

It was later reported that Berlusconi, who suffered Covid in 2020, was admitted to a hospital in Milan for routine medical tests.

“We have made it clear that Silvio Berlusconi’s candidacy is unacceptable,” Conte wrote on Twitter. “With his retirement, we are taking a step forward and starting a serious discussion between the political forces in order to offer the country a high-ranking, authoritative candidate for consensus.

Draghi, a former president of the European Central Bank, has been highlighted as a potential presidential candidate in a selection process that will officially begin on Monday, as more than 1,000 voters cast secret ballots for their preferred candidate.

Many in the Italian business community are eager to see Draghi elected president – which will give him the power to control Italian politicians and push for the continuation of an EU-funded € 200 billion economic and social reform program.

But many politicians seem wary of elevating Draghi to the presidency. 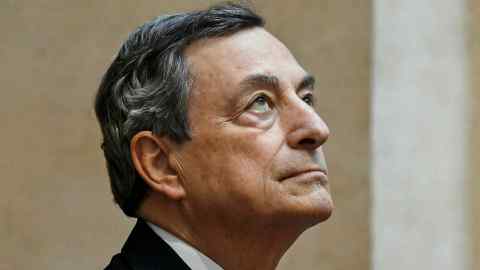 Some would prefer a less great individual. Others worry that Draghi’s rise could lead to the collapse of the current fragile government of national unity, as a diverse coalition may not be able to agree on a successor to a prime minister.

“He will not be there just to unveil monuments and give speeches – he will have a real impact,” Albertazzi said. “Many people in parliament are worried that Draghi’s election means new elections in the spring, and they absolutely want to avoid that.”

Berlusconi said it was important for Draghi’s government to stay in place to continue with investment and economic reforms.

Italy’s presidential election is known to be unpredictable, with more than 1,000 lawmakers and regional officials trying to get closer to one candidate. The candidate must receive the support of two-thirds of voters in the first three rounds of the secret ballot, but the bar is subsequently lowered to a simple majority of 50 percent plus one.