US President Joe Biden called a meeting of transatlantic leaders on Friday to discuss the Ukraine crisis and embassies stepped up warnings to leave the country amid growing alarm that a Russian invasion could be launched within days.

In a short statement the White House said Biden and counterparts including the leaders of Germany, France and the UK would be discussing “our shared concerns about Russia’s continued build-up of military forces around Ukraine and continued co-ordination on both diplomacy and deterrence” .

The call comes as Russia has continued to ramp up its military capability along Ukraine’s border. As well as adding troops to the region, Russia has started a large-scale military exercise in surrounding Belarus.

Speaking in Australia on Friday, Antony Blinken, the US secretary of state, warned that Putin could be very close to taking action.

“Simply put, we continue to see very troubling signs of Russian escalation, including new forces arriving at the Ukrainian border,” Blinken said. “We’re in a window when an invasion could begin at any time. And to be clear, that includes during the Olympics, ”he added, referring to the winter games in Beijing that conclude on February 20.

The warning comes after a flurry of high-level diplomatic activity to try to defuse the crisis, spearheaded this week by French President Emmanuel Macron, who met Vladimir Putin, his Russian counterpart, in Moscow.

Japan, the Netherlands and Latvia on Friday advised nationals to leave Ukraine as soon as possible, following the US, which earlier this year urged its citizens to evacuate. 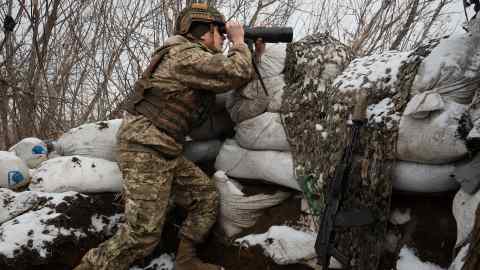 Biden has also been very blunt about the danger to Americans in Ukraine. “American citizens should leave, should leave now. We’re dealing with one of the largest armies in the world, ”he told NBC News on Thursday. “Things could go crazy, quickly.”

“This is a reliable rear for a professional and well-equipped army, which together form the basis of our state, a strong state,” Zelensky said after meeting regional governors.

Valeriy Zaluzhny, commander-in-chief of the country’s armed forces, said: “This is a force that can restrain the enemy and prevent them from thinking about setting foot on our land. . . the purpose of all this is to resist in every city, every village, on every street and in every house. ”

In Moscow, Ben Wallace, UK defense secretary, described his meeting with his Russian counterpart Sergei Shoigu and Valery Gerasimov, chief of the Russian general staff, as “constructive and frank” as he urged the Kremlin to draw down its troop build-up on the Ukrainian border.

Wallace said Shoigu and Gerasimov had insisted that Russia had no plans to invade Ukraine, but said any de-escalation would be contingent on Russia’s next steps.

“It’s all about actions. Currently there are 130,000 troops stationed at readiness or exercising, plus warplanes and ships in the Black Sea, on the borders with Ukraine. That is an action that’s not normal. It’s beyond normal exercising. And therefore I think we will judge that statement on the evidence, ”Wallace told reporters.

The Russian Defense Ministry said Shoigu told Wallace that “NATO’s military presence near Russia’s borders and ramping up tensions around Ukraine”, including by supplying Kyiv with arms, were responsible for the escalation.