Bitcoin broke out of a narrow trading range and wiped away this year’s losses amid a broad rally for cryptocurrencies, sparking speculation that the biggest digital asset could advance past the $ 50,000 mark soon.

Bitcoin may encounter its next resistance level at $ 52,000 and should it break through that, it could advance to $ 65,000 – not far off the all-time high it reached in November, according to Fadi Aboualfa, head of research at Copper. Rick Bensignor, the president of Bensignor Investment Strategies, said in a Sunday note that Bitcoin is “on the verge of a 20% run higher.” 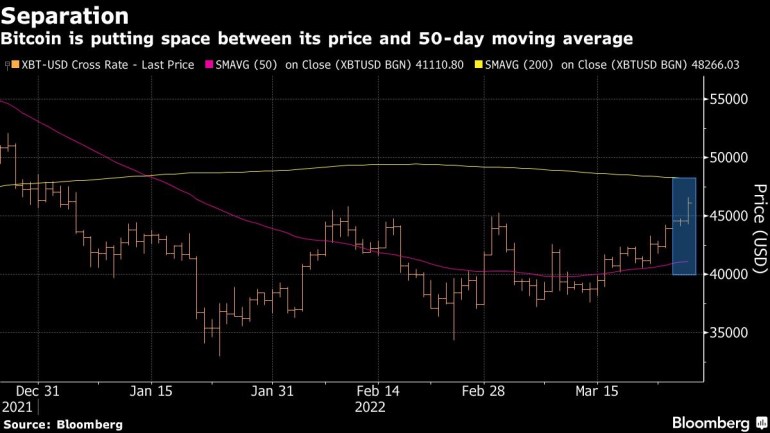 The coin has been stuck in a tight path as the Federal Reserve and other central banks remove some of the stimulus measures they put in place in response to the pandemic downturn. That means there’s less cash to go toward riskier assets, including crypto. In addition, digital currencies came under scrutiny with speculation swirling that they could be used to skirt Russian sanctions, although many analysts rebuff that claim.

Even so, Bitcoin and other tokens like Ether started a steady advance this month alongside broader increases in US stocks. But it took until the past day for Bitcoin to convincingly take out $ 45,000, a level it had only briefly touched since early January.

“As we test the top of the 2022 trading range for the fifth time, this is another one of these Bitcoin moments when the narrative could swiftly change and investors pile in, propelling the Bitcoin price higher,” said Antoni Trenchev, co-founder and managing partner at Nexo. “It might just be time to awaken from the Bitcoin-sideways slumber that’s been 2022.”

The renewed optimism for cryptocurrencies followed comments by US Treasury Secretary Janet Yellen, who said in a March 25 interview with CNBC that despite her own skepticism about the asset class, “there are benefits from crypto and we recognize that innovation in the payment system can be a healthy thing ”. Speculation on social media also suggested trading was being supported by whale activity from the Luna Foundation Guard, an open-source organization focused on the Terra blockchain, which said it plans to back the network’s token with more than $ 10 billion in Bitcoin reserves.

Bitcoin was well above its 50-day moving average in recent days, which currently sits around $ 41,085. That puts it around the 80th to 90th percentile and in the “overbought” range, according to Bespoke Investment Group. But, although that signals potential for a downturn in price for many assets, with Bitcoin it’s historically been the opposite, the firm said

“When it has been similarly overbought in its past (over the last five years), it has averaged significant gains going out one to 12 months,” according to the Bespoke report.

When Bitcoin has been in the ninth decile of its spread versus its 50-day average, it’s historically risen 16% in the next month, is up 100% six months later, and has gained 274% after a year, according to data compiled by Restless.

Bitcon’s gains since mid-March – even as Russia’s war in Ukraine dragged on – it also bolstered it versus gold, its traditional safe-haven rival, which traded sideways during the period. 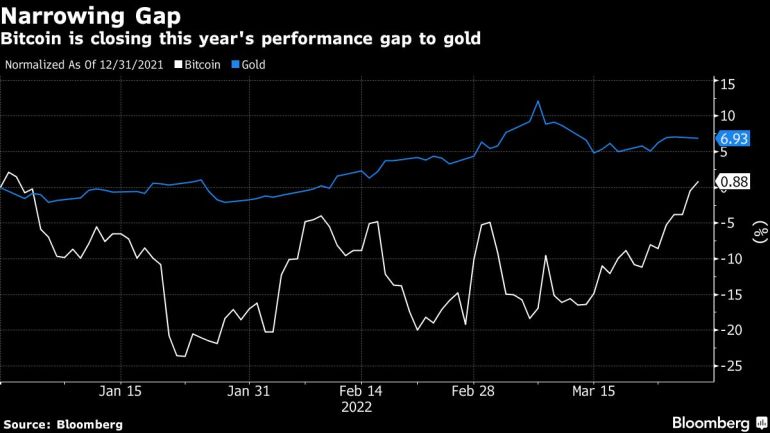 (Updates with pricing data and context in the second and seventh paragraphs.)