Boris Johnson is facing a vote of no confidence in his leadership on Monday evening in a dramatic escalation of tension between the prime minister and his own MPs.

Conservative MPs will vote in a secret ballot from 6pm to 8pm on whether they want Johnson to carry on as prime minister. Downing Street said the vote would be “a chance to end months of speculation”.

The vote was triggered after more than 54 MPs, or 15 per cent of the parliamentary party, sent letters to Sir Graham Brady, chair of the Tory backbench 1922 committee, crossing the required threshold.

Johnson will spend Monday pleading with MPs to back him and his allies are confident he will survive the secret ballot. “If he wins, that will draw a line under it,” Sajid Javid, health secretary, told the BBC.

Jeremy Hunt, a former cabinet minister who lost the leadership race in 2019 to Johnson, became the most prominent Conservative to call for the prime minister to quit.

“Conservative MPs know in our hearts we are not giving the British people the leadership they deserve,” he said on Twitter. “We are not offering the integrity, competence and vision necessary. . .. today’s decision is change or lose. I will be voting for change. ”

Under party rules, Johnson will have to secure a simple majority of 180 MPs in the secret ballot to continue in the office. The prime minister’s allies believe he will easily surpass that total.

Under current rules he can then not be challenged for 12 months, although senior Tory MPs have not ruled out the possibility that the rules could be changed to allow another vote within that period.

But even if Johnson wins a confidence vote, the bitterness and breakdown in party discipline are hard for any prime minister to repair. Johnson’s predecessor Theresa May, who survived a confidence vote in 2018, was out a year later.

In a sign of the political ground shifting under Johnson’s feet, longstanding supporter Jesse Norman, a former Treasury minister, on Monday published a letter condemning the prime minister’s leadership as “a charade”.

He said Johnson had presided over “a culture of casual lawbreaking” at Number 10 in relation to parties during Covid-19 lockdowns and the prime minister’s belief that he had been vindicated by senior civil servant Sue Gray’s report into the partygate affair was “grotesque” .

The former minister said the prime minister’s plan to send migrants to Rwanda was “ugly” and he accused him of trying to divide the country on cultural and political lines, importing elements of a “presidential” system into the UK.

Conservative MPs have had the opportunity to spend the past week in their constituencies during a parliamentary recess and many have used the time talking to voters and reflecting on Johnson’s leadership.

The four-day platinum jubilee weekend, in which Britain came together in a series of national celebrations, also included some booing of Johnson as he arrived at a thanksgiving service at St Paul’s Cathedral. 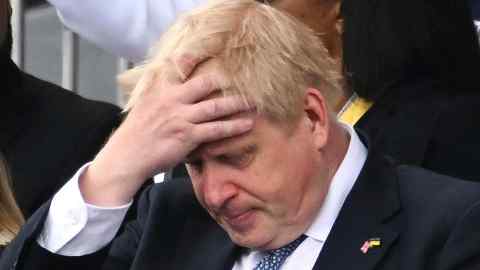 Tory unhappiness over the partygate scandal has crystallized anger, but Johnson’s divisive policies and his decision last week to endorse another tax rise – this time on energy companies – infuriated some on the right.

Downing Street said in a statement: “Tonight is a chance to end months of speculation and allow the government to draw a line and move on, delivering on the people’s priorities.

“The PM welcomes the opportunity to make his case to MPs and will remind them that when they’re united and focused on issues that matter to voters there is no more formidable political force.”