Vladimir Putin’s invasion of Ukraine has forced the biggest reappraisal of corporate relations with Russia for a generation, leaving oil executives and commodity traders with a choice between clinging on to their lucrative commercial ventures or heeding calls for divestment.

Russia is the world’s third-largest oil producer, the largest exporter of gas and for most of the past decade was viewed as the world’s most promising exploration and development destination.

Western sanctions have sought to avoid restricting oil and gas exports, and some of the companies say they can continue to operate in the country.

However, decisions by BP, Shell and Norway’s Equinor to cut ties with their Russian partners have increased the pressure on the likes of TotalEnergies, ExxonMobil, Trafigura and Glencore to do the same.

“What BP has done should put the rest of the industry’s feet on the fire,” said Christyan Malek, head of global energy strategy at JPMorgan.

While commodity groups have always operated in difficult parts of the world, even during periods of war, the pressure on companies today to adhere to higher environmental, social and governance standards meant this was “uncharted territory”, he added. “How do you advance a credible ESG agenda when you’re in a country that’s in a major conflict?”

Of the oil majors still operating in Russia, Total has the most commercial exposure now BP has decided to dump its 19.75 per cent stake in Rosneft and Shell is moving to end its partnerships with Gazprom, analysts said.

The French group has invested heavily in two projects in the Yamal peninsula in the frozen north, as it seeks to build out its liquefied natural gas business alongside local “strategic partner” Novatek. Total owns 19.4 per cent of the Russian company, which has been under US sanctions limiting its access to finance since 2014 when Putin annexed Crimea. Total also has a 20 per cent and 10 per cent stake in two Novatek LNG projects.

Russia last year delivered 16 per cent of Total’s global oil and gas production, according to investment bank Jefferies, and cash of $ 1.5bn.

Shell’s Russian production represented 5 per cent of its global total last year, Jefferies said. Expanding in the country had been a priority for Shell’s management, said a person familiar with the company’s strategy. 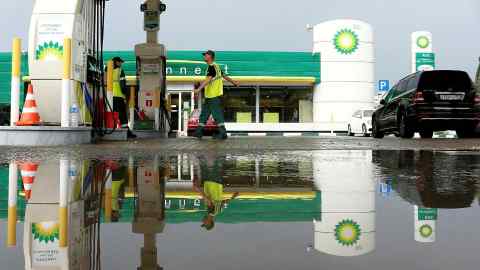 Shell owns 27.5 per cent of state-owned Gazprom’s huge Sakhalin-2 offshore LNG project in Russia’s far east. Inaugurated in 2009, it produced roughly 11.6mn tons of LNG in 2020, of which 3.2mn tons will have flowed to the group, representing about 10 per cent of the company’s global production. Its withdrawal from the project could leave Shell short of LNG in East Asia at a time when prices for cargoes of the fuel are high and expected to keep rising.

The UK-listed oil major, one of five international energy groups that each committed to fund 10 per cent of the Nord Stream 2 pipeline between Russia and Germany, is also pulling out of that project. Last week Berlin said it was halting certification of the pipeline indefinitely and the US imposed sanctions on the Gazprom subsidiary building it.

Shell’s Russia business has long been contentious among some staff, not least because four Shell employees were among those killed when Malaysia Airlines flight MH17 was shot down over Ukraine in 2014.

US Supermajor Exxon has been operating in Russia for 25 years and employs more than 1,000 people in the country. In 2018, it withdrew from joint ventures with Rosneft after the US government expanded sanctions originally placed on the Russian company in 2014.

Despite that decision, Exxon has continued to operate the Sakhalin-1 oil and gas project in partnership with two Rosneft units and companies from India and Japan. The US company owns 30 per cent of the project, which has exported more than 985mn barrels of oil and 29bn cubic meters of natural gas since production began in 2005.

Total and Exxon did not respond to requests for comment.

George Voloshin, a Russia expert with corporate intelligence firm Aperio, said he expected more divestments. “There will be a domino effect spreading well beyond the energy sector and extending to a wide variety of joint ventures and affiliates.”

At least one global oilfield services company was already reviewing its Russian projects, he added.

Commodity traders are also exposed. Swiss trading house Trafigura has built a strong relationship with Rosneft since helping it raise funds through short-term prepayment deals that were still permitted after the 2014 sanctions were introduced.

It strengthened that relationship in December 2020 when it agreed to buy 10 per cent of the € 7.3bn Rosneft-led Vostok Oil project in the Arctic, in a deal that will also give Trafigura long-term access to cheap Russian crude. If all goes to plan, Vostok will develop a new oil-producing region on Siberia’s Taymyr Peninsula to rival the US Permian Basin and Saudi Arabia’s Ghawar oilfield. A consortium led by Vitol, the world’s largest independent oil trader, is also set to take a 5 per cent stake in the project.

People with knowledge of its thinking said Trafigura had no plans to sell its stake in Vostok. They described the investment as a “small, minority interest” in a project that will not start producing oil until 2024.

Trafigura and other traders had continued to lift Russian crude and were expected to continue to do so unless it is explicitly banned by western governments, bankers said.

While UK politicians have criticized the likes of BP and Shell for their Russian relations, sanctions have intentionally avoided blocking energy exports in a sign that western leaders remain willing to buy Russian oil and gas, even if some say they do not want western companies involved in its production.

London-listed Glencore owns a 0.5 per cent stake in Rosneft, worth $ 195mn as at Friday’s close, plus 25 per cent in Russneft, a smaller Russian oil producer, which it is poised to sell. It also has a 10.5 per cent stake in En +, the metals group that has a controlling stake in aluminum producer Rusal.

“The combined $ 920mn market value of these stakes is equivalent to 1.2 per cent of Glencore’s $ 77bn market capitalization,” said JPMorgan analyst Dominic O’Kane. “In addition, Glencore’s marketing relationship and offtake contracts with various Russian commodity producers will be under scrutiny, including Rusal and Rosneft.”

If more companies run for the exit, finding buyers for unwanted minority stakes in Russian assets will be difficult. Some analysts have speculated that potential bidders could include state-owned Chinese or Middle Eastern groups such as the Qatar Investment Authority, which already owns 18 per cent of Rosneft. But any deal would be difficult to get over the line and come at a huge discount.

BP’s decision to reclassify the investment and take a paper loss without triggering a fire sale or immediately writing down the stake to zero made a lot of sense, Aperio’s Voloshin said. “It’s absolutely the worst time to sell.”