On a quiet street to the north-east of the capital Santiago, Chileans are gathering outside a modest, two-storey house to deliver handwritten letters, bring gifts or wait for a selfie with their new president.

Gabriel Boric will be sworn in on Friday as Chile’s youngest-ever leader, a hero to the protesters who swept him to the presidency but a potential threat to the business community. The bearded and tattooed 36-year-old left-winger has promised a radical program of social change to make Chile a fairer and more inclusive society while addressing demands made during street protests in 2019.

Boric’s understated headquarters has quickly become a place of pilgrimage for his supporters, who hail the millennial president-elect as a welcome break from his predecessor, the 72-year-old conservative billionaire Sebastián Piñera.

“He offers hope and youth to the next generation, something that mine hasn’t ever experienced before,” 48-year-old father-of-two Mauricio Pinto said while standing near the front door with his daughter, Sofi. Both were hoping to catch a glimpse of the new president.

Others come to make requests or bring gifts, including framed photographs from Boric’s days as a student activist, which they pass through the railings. It is a far cry from the traditional 19th-century presidential palace in the center of the capital, where a vast public square separates the people from a heavily guarded entrance.

The makeshift headquarters is a few blocks from where mass anti-government demonstrations erupted in October 2019. Boric and several of his closest advisers took part in the protests demanding social change. The movement culminated in a resounding election victory for his radical leftwing coalition, which includes the Communist party, in elections last December.

Boric has pledged to enact many of the protesters’ demands once in office: raising taxes, scrapping Chile’s pioneering private pension system, and increasing the role of the state in the economy to drive greener and more inclusive growth.

But he faces big challenges. The Chilean economy is slowing sharply as the pandemic stimulus is withdrawn. Investors are nervous of the new government’s plans for big tax rises and stricter environmental controls on the key mining industry. Congress is evenly split between left and right and a specially elected assembly is engaged in a rewrite of the constitution.

A pandemic stimulus package saw growth surge to 11.9 per cent last year but the economy is now slowing dramatically amid higher interest rates and inflation. JPMorgan expects the economy to enter a technical recession in the first half of the year and then recover to grow by 2.9 per cent in 2022. Unemployment is on the rise. 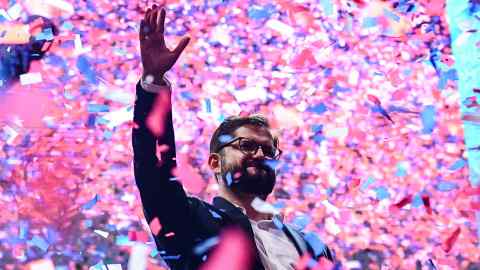 Boric has insisted he will be fiscally responsible and, to underline this message, has chosen respected former central bank chief Mario Marcel, to lead the finance ministry. Nonetheless, investors are concerned that his administration will raise taxes and toughen environmental rules on mining, which could jeopardize investment in the world’s largest copper exporter and one of its biggest lithium producers.

With his four visible tattoos and the nomination of a cabinet comprising 14 women to 10 men, Boric’s style of politics is already an abrupt break from Chile’s traditional elite. Chile is the only country in the Americas to have a female-dominated ministerial team.

Unlike Piñera and leaders before him, Boric has shunned the more sought-after areas of the capital for his home, opting instead for a nondescript house towards the grittier center that needed internet installed for the first time. He plans to live there throughout his presidential term, much in the same way as José ‘Pepe’ Mujica, the former leftist president of Uruguay who lives on a ramshackle farm and gave away most of his pay while in office. Boric often references Mujica among his key political influences.

One of the first challenges Boric faces is the redrafting of a constitution that began in July 2021 to replace the pro-market text adopted in 1980 under General Augusto Pinochet, though heavily revised since. The redrafting process must be completed by July this year, with the proposed constitution put to a national plebiscite within 60 days.

Critics say the document currently taking shape poses serious risks to future governance because of the plethora of sometimes conflicting obligations and rights it creates.

For Claudia Heiss, head of political science at the University of Chile, the incoming president’s main challenge will be to maintain trust among his supporters as well as with the business community.

“Preserving his credibility will be key,” Heiss said. Some Chileans fear Boric, she explained, referring to his long list of spending promises that could hurt the country’s hard-won reputation for economic competitiveness.

More than $ 50bn has already been moved out of Chile since the unrest in October 2019 as the wealthy shift assets abroad, according to a central bank official. Juan Sutil, president of the Confederation of Production and Commerce, told the Financial Times the business community was concerned about “which Chile” they will ultimately get under the new government.

“At play is whether Chile’s development will be agile or stagnant, falling back in line with other Latin American nations.”

Outside the building in which Boric has been finalizing his plans before taking office, a group of well-wishers voiced their support, chanting: “President, we’re with you.”