China will double the permitted trading range between its currency and Russia’s ruble to help bolster trade between the two countries as the Russian economy reels from western sanctions imposed after its invasion of Ukraine.

The China Foreign Exchange Trade System (CFETS) announced on Thursday that “in accordance with the requirements of market development” it would widen the daily trading band for the renminbi’s exchange rate with the ruble, allowing the currency cross to trade 10 per cent in either direction of a daily midpoint set by China’s central bank, up from 5 per cent previously.

CFETS said the new trading band would be implemented from Friday, “with the approval of the People’s Bank of China and the State Administration of Foreign Exchange.”

China has refrained from hitting Russia with sanctions even as western countries enacted a flurry of economic punishments for Moscow’s invasion of Ukraine. Russia is a key supplier of oil and natural gas for Beijing and the two have made substantial efforts to de-dollarise bilateral trade in the years since sanctions were first imposed on Russia over its annexation of Crimea in 2014.

Analysts said the trading band change was a practical response to support trade between China and Russia in light of the recent volatility of the ruble, which has sunk roughly 36 per cent this year against both the US dollar and the renminbi. By comparison, China’s currency has remained steady at around Rmb6.3 against the greenback.

“This will facilitate trade and improve market liquidity” for the renminbi-ruble exchange rate, said Ken Cheung, chief Asian foreign exchange strategist at Mizuho Bank. “From a market maker’s perspective, if they had kept the 5 per cent band it would be very difficult to price [the exchange rate]. ”

The renminbi’s relative resilience throughout the Ukraine crisis has fueled talk that the currency could become a haven, as well as speculation that Beijing could utilize its yuan-based international payments system to help cushion the blow from sanctions that have rocked Russia’s economy.

Among the most severe measures levied by western countries so far is the ejection of most major Russian financial institutions from Swift, the global payments system. Payment networks Visa, Mastercard and American Express have also announced plans to suspend operations in Russia. 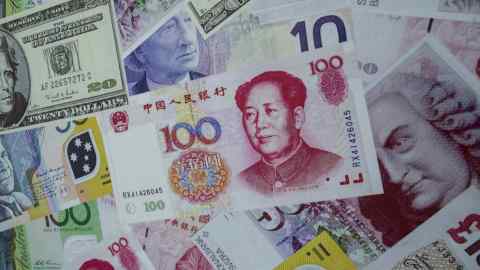 Following the latest sanctions being imposed, Chinese state media has highlighted the opportunity for the country to boost the use of its own cross-border payments system meant to rival Swift. Russian banks have floated the possibility of issuing co-badged cards linked to both Russia’s Mir and China’s UnionPay international payment systems.

One China economist at a European bank in Hong Kong said the trading band change would make the exchange rate more flexible and allow institutions in China that paid for oil from Russia using rubles to convert the currency into renminbi at a more favorable rate.

“Five per cent is actually a reasonable range, but of course if you’re talking about [emerging markets] countries that have a crisis. . . there’s a definite need to see it, ”the economist said.