But her fortune went up in smoke after Chinese officials detained her in January.

Chu, a reclusive billionaire in her early fifties who lived in Hong Kong, started her tobacco flavoring business in 1996 and built her empire across China. However, her reign was cut short when she was placed under investigation for “suspected disciplinary violations”, according to a statement released by her company Huabao.

She is being held in “residential surveillance”, a form of off-grid detention used by the Chinese Communist party and criticized by human rights groups for lacking due process. Her son, Lam Ka Yu, who was educated in the US and the UK and is in his late 20s, was also detained.

Huabao manufacturers flavors and fragrances for tobacco, food and personal products. More than $ 5bn has been wiped off the value of two of the group’s listed companies since it disclosed the investigation.

No details on the suspected violations have been provided. The company declined to answer questions.

The sudden downfall of Chu, one of China’s richest self-made women, is the latest example of how President Xi Jinping’s rejuvenated graft crackdown is increasingly targeting not only corrupt officials but also the entrepreneurial class that has fueled the country’s economic growth.

The scene is set for Chu to “play a key role in bringing down officials in the tobacco administration,” according to Alex Payette, chief executive of Cercius Group, a consultancy specializing in elite Chinese politics.

The investigation into Chu came just weeks after the Central Commission for Discipline Inspection, the Communist party’s top graft watchdog, leveled a series of corruption allegations involving Pan Jiahua, the party’s own former disciplinary inspector at the state tobacco conglomerate.

Pan was arrested last year after serving in the post from 2005 to 2012. He was accused of accepting “huge sums of money” for himself and illegitimate benefits for family members through a network of shadow companies and a “revolving door” of retired senior officials .

One Beijing-based tobacco control veteran, who spoke on the condition of anonymity, expected that more heads would roll following the investigations into Pan and Chu as the party flexes control over the industry.

However, the industry figure predicted Beijing would stop short of overhauling one of its biggest tax generators.

“Tobacco is different,” the person said, adding that the powerful China National Tobacco Corp has long been “the most profitable” of the country’s state-owned enterprises.

CNTC is an umbrella group of regional producers, manufacturers and distributors. For decades, the group has enjoyed an ironclad monopoly over a $ 235bn industry that is far bigger across every metric than Big Tobacco in the west.

Its half a million staff are responsible for about four in every 10 cigarettes smoked in the world – 2.5tn cigarettes annually – and for keeping about 300mn Chinese smokers hooked.

Beyond the sheer number of insiders who benefit financially – and who have a record of resisting change – any sudden loss of revenue from the industry would leave a gaping hole in state coffers.

Tobacco-linked taxes account for as much as 5 per cent of central government’s revenue, and the figure is higher for many local governments.

Making reform even tougher is the unusual situation in which the same entity functions as a corporate monopoly, a regulator and a policymaker, experts said.

“It is the same leadership, but they can wear different hats. They can either represent the government, such as the State Tobacco Monopoly Administration, or present themselves as the China National Tobacco Corporation, ”said Jennifer Fang, a tobacco control research fellow at Simon Fraser University in Canada. 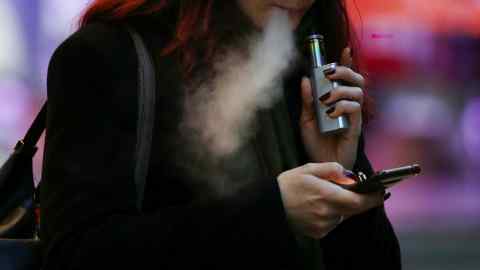 Corruption is endemic, said the tobacco veteran. CNTC executives moving from corporate to regulatory roles in the later stages of their careers has led to a culture of graft. Past crackdowns have only created a new generation of quasi-bureaucrats and their business partners that continue the practice, the person added.

The future of vaping, a crucial growth sector for Huabao, is more precarious, experts said. Vaping has enormous potential in China, but it has struggled to compete with low-cost cigarettes, which sell for as little as Rmb6 ($ 1) per pack on the streets of Beijing.

The market is forecast to reach about $ 1.8bn this year, doubling in size from 2018. About 1.5 per cent of smokers in China use e-cigarettes, compared to as much as 30 per cent in the US, the UK and Japan, according to iiMedia Research, a Guangzhou consultancy, and Daxue Consulting, a Shanghai research group.

For months, the e-cigarette market has been squeezed by dual pressures. Health groups are concerned about youth uptake, supporting government clampdowns on online advertisements and sales to minors.

The traditional tobacco industry has also been muscling in. A reform of the industry announced last year will mean that e-cigarette production and sales will fall under the remit of the State Tobacco Monopoly Administration.

The prospect of a tobacco crackdown in China does not phase foreign companies, even though most hold international distribution joint-ventures with CNTC, experts said.

China is an “extremely small market” for international tobacco groups, said one person with knowledge of the industry, adding: “We’ve never been asked about it in an investor meeting.”

For Chu, the future is far from clear. The CCDI, the highly secretive extralegal body that can investigate and detain party members, might allow some leniency in exchange for co-operation. But acquittals are a rarity in a judicial system with a near-100 per cent conviction rate.

The Cercius Group, which has studied Chu’s political connections and that of her husband, businessman Lam Kwok Man, said it did not “expect any good outcome”.

Payette thought that Chu could “reappear”, as Fosun Group’s Guo Guangchang did in December 2015. “However, Chu has neither the economic nor political clout of Guo,” he said, “thus little to no negotiating room with the party.”