At a briefing on Wednesday afternoon in London to discuss the outlook in emerging markets, executives at Ashmore – an investment house specializing in developing countries – kicked off by addressing “the elephant in the room”: Russia.

The country had just recognized the independence of two regions in eastern Ukraine, and the US was a warning of an imminent broader land grab.

The situation, Ashmore pointed out, was fluid. It demanded a “very, very careful” approach from fund managers. But the core view was that the Russian president would not send troops towards Kyiv. There would be no full invasion and instead, “a good chance that soon we won’t be talking about it”. A few hours later, Russia invaded its neighbor on multiple fronts.

The frippery of numbers, markets and money is, of course, at most a secondary concern for all right-minded people while the ensuing humanitarian and geopolitical crisis unfolds. Nonetheless, those paid to look after our pensions and savings for a living have an obligation to figure out what it all means.

Immediately, it meant a historic crash in Russia’s stock markets, a blast of nerves across asset prices around the world and the growing likelihood that, through its dominance of multiple commodities, Russia’s sovereign hostile takeover campaign will complicate an already tricky global economic outlook by jacking up inflation.

The fact that Russian stocks dropped almost 50 per cent at the start of trading on Thursday – one of the biggest drops in any stock market ever – gives a strong signal that a number of specialist investors failed to see this coming. Just hours before Russia’s full invasion began, analysts at banks and investment houses were busily issuing research notes all based around the same “core scenario”.

“Most people thought we would avoid this,” said one emerging-markets investor. “We did, and we kept that view right up until the end.”

Some fund managers had cut back their positions on Russia, in case the build-up of troops dented asset prices. But even investors generally downbeat on Russia and skeptical of its motives have been blindsided as President Vladimir Putin has exceeded expectations for the ferocity of his campaign.

So now what? Russian markets have stabilized. The Moex stocks index is likely to end the week down by a relatively modest 27 per cent – a savage drop but still a bounce from the extreme low point of the week. It is very hard to see how this market can recover fully from here, or Ukraine’s for that matter. A debt default or restructuring for the latter feels inevitable.

This is likely to cast a cloud over emerging markets assets as a whole. “Say I’m talking to a client who had been considering a Russian equities mandate. . . that’s not going to happen, “said the EM fund manager. “Not just for Russia, but if they were looking at any EM allocation, they want to pull out or they want to wait before they go in.”

And yet, in many major markets, we are already back to business as usual. In the US, the S&P 500 index of stocks dropped on Thursday, but ended the day in the green. So did the Nasdaq Composite. In Europe – clearly the most vulnerable region to this war on its doorstep – stocks were well on their way to recovering losses by the end of the week.

“The market does not yet fully understand the impact of this geopolitical shock,” wrote the investment team at Amundi. “This is not the time to try and buy the dip.” But that is what investors do best, and right now, fund managers seemingly judge that there is insufficient reason to believe this war will throw the global economy off course, especially as sanctions have so far not bitten too hard into Russia’s commodities trade. 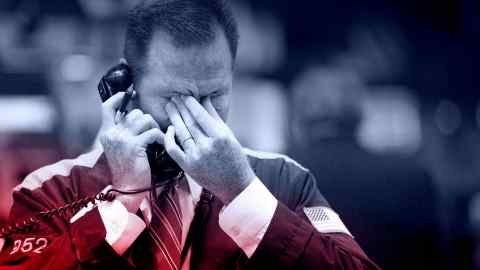 The rates strategists at Rabobank think you can look at this crisis in two ways – as a further prop for already punchy inflation or as a potential shock to growth. “For Fed officials, there is as yet no evidence to suggest the latter concerns are outweighing the former,” wrote Richard McGuire and Lyn Graham-Taylor at the bank.

A string of Federal Reserve officials this week confirmed that policymakers were, of course, watching the Ukraine situation closely. Tom Barkin, president of the Richmond Fed, said the war was unlikely to shift the “underlying logic” of the plan to start raising interest rates. Atlanta Fed president Raphael Bostic said he was keeping a watchful eye, but that Fed policy was “poised to return to a more normalized stance”.

Fed governor Christopher Waller, meanwhile, said “it is too soon to know how an attack on Ukraine will affect the US economy, and it may not be much easier by the time of our March meeting.” For now, all things being equal, he supported raising rates to counter inflation.

As Rabobank said: “If the Fed believes it’s still business as usual, maybe the market should too.”

All in all, Ashmore may still end up being right. Putin has shocked the world, but investors may no longer be talking about his impact on their portfolio in a few weeks.