Credit Suisse investors have warned that they will try to block any move to extend the tenure of the bank’s longtime vice-chair Severin Schwan, as the scandal-hit lender faces growing pressure to rebuild its reputation.

The future of Schwan, who is also chief executive of the Swiss pharma group Roche, is in the spotlight as Credit Suisse attempts to restore investors’ confidence following the abrupt exit last month of chair António Horta-Osório for repeated breaches of coronavirus quarantine rules.

Shares in the bank have tumbled more than 60 per cent since Schwan joined the board in 2014, with last year’s twin scandals involving supply chain finance firm Greensill Capital and family office Archegos damaging the bank’s reputation for risk management.

Schwan had intended to leave before the bank’s annual meeting in April, according to three people familiar with the matter, but has been asked by other board members to reconsider his departure to maintain stability under the new chair, Axel Lehmann, who only joined the board in October, the people said.

However, two top 10 shareholders told the Financial Times they would vote against Schwan – who has served as vice-chair and lead independent director since 2017 – in the event he was proposed for re-election.

Several other investors said they had serious concerns about Schwan’s ability to run one of the world’s largest drugmakers while also acting as the bank’s vice-chair, which involves deputizing for the chair and advising them.

“If he’s up for election there will be a fight,” one top 10 shareholder told the FT.

The bank, which releases its annual results on Thursday, has yet to publish its list of proposed board members ahead of its AGM on April 29.

Last month, Schwan told the Swiss newspaper Tages-Anzeiger that he had not made up his mind about whether he would stand at the AGM. “In any case, the task now is to stabilize the bank and I am happy to support the new chair in this,” he added.

Andreas Gottschling, who had served as chair of Credit Suisse’s risk committee, last year stepped down from the board after several large shareholders indicated they would vote against his re-election.

Schwan was instrumental in bringing Horta-Osório on to the board, but less than a year later was also one of the main forces pushing for his removal, according to people with knowledge of the board’s deliberations.

“His role as Roche CEO does not benefit Credit Suisse. . . he should [leave Credit Suisse] and go on to another board, ”another top 10 shareholder told the FT.

Credit Suisse’s shareholder base is heavily weighted towards Middle Eastern investors that bailed out the bank during the financial crisis, vast US passive fund managers and a collection of midsized investment companies with concentrated positions.

The Norwegian sovereign wealth fund, which is a top 10 shareholder, has not said how it will vote at this year’s AGM, but last year voted against Schwan’s renewal.

Some shareholders said they had yet to decide whether to back Schwan if he was proposed, saying they had to balance concerns over the need to refresh the board with the need for stability during a time of upheaval.

“There will be some shareholder pressure on Schwan to go, but I’m still not convinced right now is the time,” said Vincent Kaufmann, chief executive of the Ethos Foundation, which represents 200 Swiss pension funds that own up to 5 per cent of the lender.

“But I would consider his daily commitment, combining his role as CEO of Roche, to be too much, so he should step down from some committees at least,” he added. 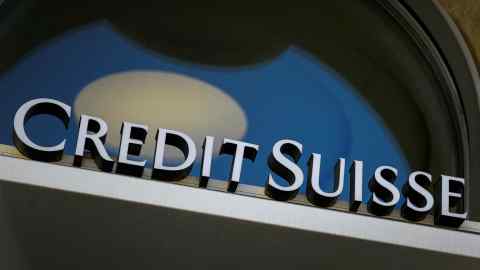 Their value-centered investment strategies are dependent on a recovery for the group, with some having been convinced to invest in the bank with the appointment of turnround specialist Horta-Osório as chair.

“Credit Suisse trades at an absurdly low valuation for the inherent quality of the assets it owns,” said David Samra, whose Artisan International Value Strategy started investing in the bank last spring.

Video: Greensill: a tale of hubris, hype and greed