Crypto exchanges are coming under pressure to block transactions with Russia, as western politicians fear that cryptocurrencies provide a back door to move money around the world while they seek to shut down Russia out of the global financial system.

Trading between the Russian ruble and crypto assets such as bitcoin and tether has doubled since the assault on Ukraine began, reaching $ 60mn a day on Monday, according to data from Chainalysis, a crypto research group. That suggests Russian accounts – barred from the established dollar-based financial system through sanctions – are stashing funds in crypto or moving wealth overseas.

Mykhailo Fedorov, Ukraine’s vice-prime minister, on Sunday called on “all major crypto exchanges to block addresses of Russian users”, saying it is “crucial to freeze not only the addresses linked to Russian and Belarusian politicians, but also to sabotage ordinary users ”.

Western allies have imposed sanctions on hundreds of individuals, chiefly oligarchs and politicians close to President Vladimir Putin, and most big exchanges have said they will comply with those restrictions.

But several have pushed back on any Russia-wide bans.

“To unilaterally decide to ban people’s access to their crypto would fly in the face of the reason why crypto exists,” said Cayman Islands-registered Binance, one of the world’s largest crypto exchanges. Rival Okx, based in the Seychelles, also said it had no plans to bar Russian accounts in bulk.

Western powers have expressed concern about crypto being used to evade sanctions. A White House official said the Biden administration was “continuing to aggressively combat the mission of cryptocurrency, including to evade US sanctions.”

Liz Truss, UK foreign secretary, said on Monday that Britain was looking at cryptocurrency as a route that could be used to undermine sanctions aimed at Russian banks and global payments.

“There remains a considerable risk of Russian individuals and entities sanctioned last week continuing to trade in cryptocurrency assets,” said MP Tom Tugendhat, who chairs the UK House of Commons foreign affairs committee, and Tory peer Lord Sarfraz in a letter urging the Financial Conduct Authority do more to crack down on possible sanctions violations.

But for some crypto market operators, a ban would mark a profound break from early pioneers who conceived the idea of ​​the blockchain precisely to circumvent the global banking system.

Jesse Powell, founder of the Kraken exchange, said his company’s mission was to “bridge individual people out of the legacy financial system and bring them into the world of crypto, where arbitrary lines on maps no longer matter, where they don’t have to worry about being caught in broad, indiscriminate wealth confiscation ”. Kraken “cannot freeze the accounts of our Russian clients without a legal requirement to do so”, he added.

“Bitcoin is the embodiment of libertarian values, which strongly favor individualism and human rights.”

Russia is among the top 20 countries worldwide with the highest level of cryptocurrency adoption, according to a Chainalysis index. Even prior to the war, Russia ranked third among countries that sent the largest share of crypto transfers abroad, after Turkey and Ukraine.

“Capital flight and tax avoidance may also be part of the cryptocurrency adoption story in Eastern Europe, particularly in Russia and Ukraine,” Chainalysis said.

Sanctions from the US, UK and EU in recent days have severed links between Russia and the global financial system, barring trade with certain banks and freezing some Russian banks’ access to Swift, the messaging system that underpins global payments. Trading with the central bank is also heavily restricted. 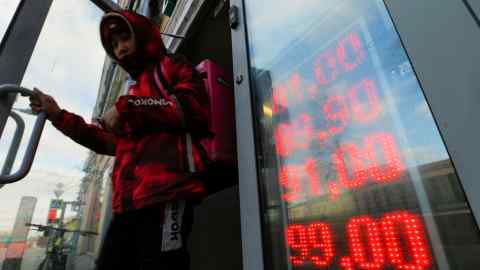 US-based exchanges Coinbase and Gemini both said they did not operate in Russia. However, Coinbase said it would not “institute a blanket ban on all Coinbase transactions involving Russian [crypto wallet] addresses ”. Bahamas-headquartered FTX has also pledged to honor sanctions on individuals, but not implement a ban on the country.

“You have to make sure that you are not being a gateway for sanctions evasion and money laundering,” said Sam Bankman-Fried, founder of FTX.

Many crypto exchanges operate out of offshore jurisdictions or are unregulated beyond their obligation to comply with money laundering legislation.

Investors can turn their rubles into crypto, which can then be traded on unsanctioned entities. The Financial Stability Board, a global committee of regulators and central bankers, has warned that digital assets could be used to evade sanctions.

Even so, lawyers point out that crypto exchanges face extensive legal risk since transactions recorded on blockchains are public and immutable.

“Crypto operators are at a higher risk than those in traditional financial services spaces, however, because they will be on the hook for what they ought to have known about the ownership of the assets they handle,” Jason Hungerford, a partner at law firm Mayer Brown in London.

But the role of crypto as a payment system for potentially unlawful transactions from Russia may have longer-term consequences.

“Governments are likely to look at the regulation of crypto as a matter of increasing urgency,” said Paul Donovan, chief economist at UBS Global Wealth Management.