For most of the 25 years since Walt Disney bought ESPN, the cable sports network has been a major profit engine of the company, thanks to robust subscriber growth, high advertising rates and industry-leading fees and charges cable providers.

But like the wider US cable television business, its subscriber numbers have been steadily shrinking as audiences have migrated to streaming services. From a peak of about 100mn subscribers in 2011, ESPN had 77mn by the end of 2021, down 23 per cent. S&P Global Market Intelligence estimates that the figure will fall to 72.5m this year.

“ESPN is still an engine from a cash standpoint, but in terms of growth trajectory it’s a challenged business as more people are cutting the cord and giving up on pay-TV,” said Rich Greenfield, an analyst at LightShed Partners.

The downward trend has prompted speculation among analysts that Disney might spin off or sell ESPN. But Disney chief executive Bob Chapek insists it has a future within the company – one that is increasingly online, and, controversially for a company built on a family friendly image, tied to sports betting.

The push into betting, Chapek said during its results call last month, was “driven by the consumer, particularly the younger consumer that will replenish the sports fans over time and their desire to have gambling as part of their sports experience”. He added that the future of sports programming will extend to “sports betting, gaming and the metaverse”.

Sports betting has exploded in the US since a 2018 Supreme Court decision ended Nevada’s hold on the market, opening the door to more than 30 states to legalize it so far. This has fueled the rise of online sportsbooks – virtual spaces where gamblers can place bets – and companies providing data and other services. 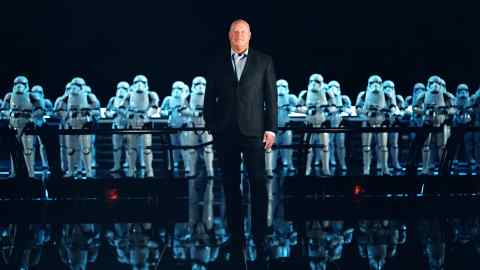 Goldman Sachs has projected that the US sports betting market will reach $ 39bn by 2033, from $ 900mn today.

Jessica Reif Ehrlich, an analyst at Bank of America, said one of the appeals of sports betting for Disney was that it gives fans a reason to stay tuned into games at a time when many are choosing to skip the whole match and watch highlights on social media instead.

“You’re betting on a play, on an athlete – there are different elements that keep everyone interested,” she said. “And it brings in a younger demographic.”

So far, Disney’s presence in betting is modest. It acquired 6 per cent stake in DraftKings, a fantasy sports and betting group, in 2019 when it bought 21st Century Fox. It also has a deal with Caesars that gives it the exclusive right to provide sports betting odds to ESPN.

DraftKings and Caesars are prominent advertisers on ESPN and the network’s streaming service ESPN +, which links to their online-betting platforms. On the television network and ESPN +, which has 21mn subscribers and is lossmaking, there is a range of betting-related content, including odds, game projections and other statistics – all of which would have been taboo on US sports networks just a few years ago .

Reports arose last year that ESPN was seeking billions to license its name to a sportsbook such as Caesars, DraftKings or MGM Resorts, although no deal has materialized. But Ehrlich expects ESPN to make a move to strengthen its position in the market.

“ESPN is going to get bigger in sports betting, more visible,” she said. “They really barely put their toe in the water with a modest stake in DraftKings, so the question is how do they get in in a bigger way. They’re not going to handle the bets, but do a licensing deal. “

Greenfield said Disney also has the option of taking the more drastic step of merging ESPN with a sportsbook and creating a separate business. “Are they merging all-in with a sportsbook, or just licensing? They haven’t decided yet, ”he said. “These are big strategic questions you have to decide.”

A licensing deal would allow ESPN to play a bigger role in the market without actually handling the mechanics of taking bets – a distinction that may be lost on some consumers who care about Disney’s wholesome, family friendly image.

“Disney has been meticulous about ensuring that the brand is a nurtured and protected asset,” said Americus Reed, a marketing professor at the University of Pennsylvania’s Wharton business school. “Sports betting can have a connotation that is antithetical to what Disney is about. The challenge will be to reframe the category, [to say] it’s legal, it’s a different thing now – we don’t want you to think of it in the old way. “

But Chapek said Disney’s internal research has found consumer attitudes toward sports betting have changed. “We feel the Disney brand is broad enough to have an ESPN business under our roof and have ESPN in the business of sports betting,” he told the FT in November. “That’s not harmful to the mother brand and is beneficial for the ESPN brand. The Disney brand is resilient. ”

As it plots its strategy, Disney must contend with a continued decline in ESPN’s core cable business. “They’ve lost a quarter of their paying subscribers, and there are no signs of this reversing any time soon,” said Scott Robson, a research analyst at S&P Global Market Intelligence’s Kagan. “But through the past decade they’ve maintained a profitable business and kept their revenue streams afloat.”

That is because ESPN has been able to charge cable companies among the highest rates in the industry to carry the channel. Yet programming expenses have also been going up – and will continue to do so. Amazon and Apple have entered the competition for sports rights, which most analysts believe will only push the costs for rights to major sporting events even higher.

All of these means ESPN is at an “inflection point,” Robson said, where the core business becomes less profitable as the company spends more to become a bigger streaming player. But sports betting could open new areas for growth.

“It’s exciting if you are a cable network in a mature part of the life cycle and you have the potential to breathe new life into your properties with gambling relationships,” he said.