Dozens of people were feared dead after a Saudi-led coalition air strike on Yemen on Friday, aid agencies and rebels said, as hostilities escalated in the impoverished nation’s seven-year war.

The bombing of a detention facility took place as the Saudi-led coalition launched a series of air strikes against areas controlled by the Iranian-aligned Houthi movement in retaliation for a rebel missile and drone strike against the United Arab Emirates this week.

The International Committee of the Red Cross said the detention center run by the Houthis in Sa’ada, northern Yemen, was hit in the early hours of Friday. The group said it was “deeply concerned about the intensification of hostilities over recent days, including attacks against cities across Yemen, in Saudi Arabia and in the United Arab Emirates”.

The Houthis’ health minister told the Associated Press that more than 70 inmates at the detention facility were killed. Save the Children said the air strike reportedly killed more than 60 people and injured more than 100, most of them migrants.

Médecins Sans Frontières, the aid agency, said a hospital in Sa’ada had received more than 200 wounded and was “so overwhelmed that they cannot take any more patients”.

“From what I hear from my colleague in Sa’ada, there are many bodies still at the scene of the air strike, many missing people. It is impossible to know how many people have been killed, ”said Ahmed Mahat, MSF’s head of mission in Yemen. “There were also air strikes in Sana’a [the capital] last night, including on the airport, and we have received reports of air strikes in many other governorates across the north of Yemen. ”

The Saudi-led coalition said it would investigate the reports. “We take this report very seriously and it will be fully investigated as all reports of this nature are, using an internationally approved, independent process. Whilst this is ongoing, it would be inappropriate to comment further, ”coalition spokesman Brigadier-General Turki al-Malki was quoted as saying by Reuters news agency.

The internet was down across much of the country after another air strike reportedly destroyed a telecommunications center in the port city of Hodeidah, which is also controlled by the Houthis.

The conflict escalated this week after the Houthis fired ballistic and cruise missiles and drones at the UAE, hitting a state oil facility in an industrial district of Abu Dhabi and causing a fire at a construction site at the capital’s international airport. Three people were killed in the attack, the first such assault publicly acknowledged by the UAE, which is the region’s main trade and tourism hub.

The UAE was one of the main partners in the Saudi-led coalition that intervened in Yemen’s civil war in March 2015 after the Houthis seized Sana’a and ousted the Yemeni government. The Gulf state pulled most of its troops out of the country in 2019, but in recent weeks a UAE-backed Yemeni faction has joined Saudi-supported fighters in stemming a Houthi offensive in Marib and Shabwa provinces. 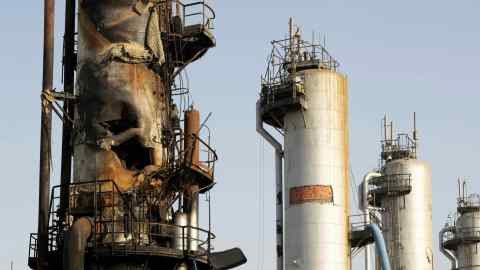 The intervention of the “Giants Brigade” halted the Houthi advance and dealt the rebels their first significant military reversal in months.

The war in Yemen has triggered what the UN describes as the world’s worst man-made humanitarian crisis, with nearly 250,000 directly and indirectly killed.

The Saudi-led coalition has been widely criticized for its conduct of the conflict, particularly because of the air strikes that have killed thousands of civilians as schools, hospitals, houses and other buildings have been destroyed.

The Gulf states accuse Iran of backing the Houthis and supplying the rebels with increasingly sophisticated missiles and drones. The Houthis, an Islamist movement that controls Yemen’s populous north, have launched hundreds of missile and drone attacks into Saudi Arabia.

Diplomatic efforts to halt the conflict have floundered as the rebels have launched a year-long offensive to capture the oil- and gas-rich Marib province, which, if successful, would open the path for them to advance south into areas controlled by Yemeni forces backed by Saudi Arabia and the UAE.