Turkish President Recep Tayyip Erdogan is in Kyiv for talks with his counterpart Volodymyr Zelenskyy after pitching Ankara as a mediator in the Ukraine-Russia crisis.

Erdogan’s trip on Thursday marks the latest in a string of visits to Ukraine by NATO leaders in recent days.

Turkey, which has interests in both Ukraine and Russia, has been playing a mediating role in the crisis so far. While Ankara is involved with Moscow in several global conflicts, it also sells weapons to Ukraine.

Western powers still fear a Russian invasion is possible given the build-up of more than 100,000 soldiers at the Ukraine border, but Moscow denies having plans to attack.

It has instead blamed the United States and the Washington-led NATO alliance for undermining the region’s security and demanded sweeping guarantees from the West.

The US has dismissed Moscow’s main proposals – that NATO ceases activity in Eastern Europe and never allow ex-Soviet state Ukraine to become a member – as non-starters.

And further angering the Kremlin on Wednesday, Washington announced it would deploy troops to Eastern Europe to “deter and defend against any aggression.”

Russian defense minister in Belarus ahead of joint drills

Russian Defense Minister Sergei Shoigu has arrived in Belarus to inspect Russian and Belarusian troops ‘preparations for joint drills this month, according to Belarus’ defense ministry.

Moscow has moved an undisclosed number of troops and military hardware to neighboring Belarus, which also borders Ukraine, for the February 10-20 joint drills. The Kremlin says the forces will be withdrawn after the exercises have been completed.

Ukraine has faced significant challenges since winning independence in 1991. 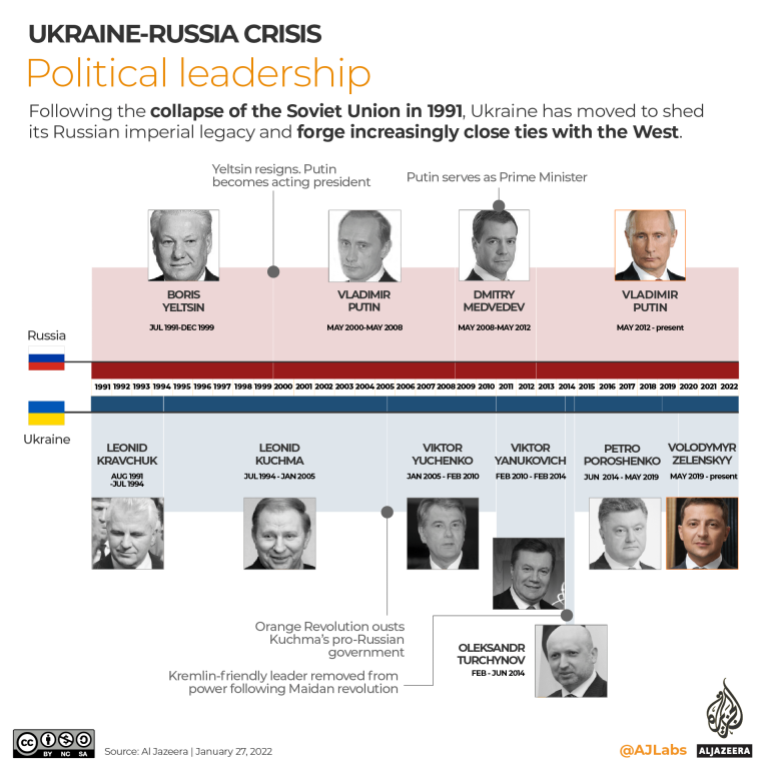 US military aid arrives in Kyiv

Al Jazeera’s Hoda Abdel-Hamid, reporting from Kyiv, says the seventh delivery as part of a $ 200m US security support package to Ukraine has arrived in the capital.

“This time [the delivery] is carrying about 80 tons of ammunition for grenade launchers, ”she said. “This is all being loaded into trucks by the Ukrainian army, but as per the Minsk agreement – a ceasefire agreement between Ukraine and Russian-backed separatists – this hardware cannot go to the frontline in eastern Ukraine,” she said.

Why is Turkey trying to mediate the Ukraine-Russia crisis?

Turkey is hoping to help defuse tensions between its NATO allies and Russia over the Ukraine crisis. For months, Ankara has been calling for both sides to tone down their rhetoric.

While invested in the Ukrainian defense industry, Turkey is also involved with Russia militarily in a number of conflicts, meaning it needs to strike a balancing act.

Erdogan ‘believes he can speak freely and frankly’ with Zellensky, Putin

Al Jazeera’s Sinem Koseoglu, reporting from Istanbul, says Erdogan has stepped up as a “mediator between Ukraine and Russia as he believes he can speak freely and frankly” with both Zelensky and Russian President Vladimir Putin.

“Hey [Erdogan] says he doesn’t like to see two neighbors in a conflict, but that as a NATO member, if Russia invades Ukraine, Turkey will do what is necessary to hold the eastern flank of the transatlantic military alliance, “she said.

“But of course, Turkey and Russia have strategic relations and strategic cooperation when it comes to Libya, Syria and Nagorno-Karabakh… so Erdogan needs to be very careful while dealing with this issue… as he has some national interests at stake.”

France’s offer to send troops to Romania as part of wider NATO plans to bolster its ranks on the alliance’s eastern flank is not meant to provoke Russia, Foreign Minister Jean-Yves Le Drian has said.

Speaking after meeting foreign ministers from Eastern Europe and the Baltic states in Bucharest, both Le Drian and his Romanian counterpart Bogdan Aurescu said France and NATO were doing everything to convince Russia to choose dialogue rather than escalation.

NATO Secretary-General Jens Stoltenberg says Russia has been moving some 30,000 combat troops and modern weapons to Belarus over the last few days, Moscow’s biggest military deployment to the country since the end of the Cold War.

“All this will be combined with Russia’s annual nuclear forces exercise,” he added. The dual-capable term, which Stoltenberg used for the Iskander missiles, is used to describe weapons meant for conventional and nuclear warfare.

The deployment of additional US troops in Eastern Europe will escalate tensions in the region, the Kremlin says.

Erdogan says before departing for Kyiv that Ankara hopes to stop “any form of confrontation between Russia and Ukraine”.

“We support Ukraine’s territorial integrity and sovereignty,” the Turkish leader told reporters in the country’s capital. “As a country in the Black Sea region, we advocate for peaceful resolution and call upon all parties to use restraint.”

US Congresswoman Ilhan Omar has condemned a bill that would allow Washington to impose sweeping economic sanctions on Russia should take such aggressive action against Ukraine and supply Kyiv with weapons.

“The proposed legislative solution to this crisis escalates the conflict without deterring it effectively,” Omar said in a statement posted on her website.

“I am under no illusions about the horrors of invasion will unleash, or that it is Russia that is responsible for bringing us to the brink… but I cannot in good conscience support a bill that places militarism and economic warfare over the urgent needs of both Ukrainian and Russian civilians, ”she added.

The full text of the so-called Defending Ukraine Sovereignty Act of 2022 is available here (PDF).

The Norwegian Refugee Council says that up to two million people living on both sides of the contact line in eastern Ukraine, where Kyiv has been battling Russian-backed separatists since early 2014, will be under increased threat of violence and displacement if conflict escalates.

“Active hosts would dramatically worsen the existing humanitarian situation, where needs are already high from years of violence,” the NGO said in a statement, adding that it called on all parties in the conflict to “prioritize de-escalation, and refrain from all hostilities ”.

“It would devastate already damaged civil infrastructure, further restrict peoples’ movements, block access to communities in need, and disrupt essential public services such as water, power, transport and banking. It would also trigger massive new displacements, as millions of people in Donetsk and Luhansk regions would be under threat. ”

“The human suffering of renewed conflict would be limitless. It would result in massive civilian casualties and displacement, and soaring humanitarian needs,” he warned. @NRC_Egeland on a visit to #Ukraine this week. https://t.co/CdQzt2RH5g

US President Joe Biden and his French counterpart Emmanuel Macron have reviewed the coordination of diplomatic efforts and plans to impose economic costs on Moscow should it invade Ukraine, according to the White House.

“President Biden and President Macron agreed their teams will remain in close touch, including in consultation with NATO Allies and EU partners, on our coordinated and comprehensive approach to managing these issues,” the White House said in a readout of Wednesday’s call.