Estonia’s president has warned that the Baltic states should prepare for the use of hybrid warfare tactics, saying they must be ready for cyber attacks and migrant flows to be employed against them.

Alar Karis said that although there was no direct threat to Estonia, he was worried about the thousands of Russian troops being sent to Belarus for snap military exercises. Belarus last year deliberately funnelled large numbers of migrants to its borders with Poland, Lithuania and Latvia in an effort to unsettle the EU countries.

“We need to be ready. . . hybrid attacks, cyber attacks: these things can happen, ”Karis told the Financial Times. The crisis on the Belarus-EU border last year, when migrants were trapped in often freezing conditions, “was definitely not orchestrated by the migrants themselves, but by Belarus – and even Russia itself. This is what we have to be prepared for ”.

The Baltic states have raised their military readiness and called for increased NATO presence in their region as Russia continues to gather its forces on Ukraine’s border close to the eastern flank of the military alliance.

The UK this week confirmed that it would double its presence in Estonia, where it leads to a 1,000-strong multinational battlegroup. Germany said it would send more troops to Lithuania and Canada is considering increasing its troop numbers in Latvia.

“Deterrence is something that works if we deal with Russians. The more troops we have over here the better, ”Karis said. “For a small country like Estonia, it’s important that we feel secure.”

Putin did not expect this kind of unity in NATO or Europe. This is why he started this kind of bilateral discussion

The Baltic countries are particularly concerned about the more than 30,000 Russian troops on an unannounced exercise in Belarus, which has strong ties with Moscow. “If these troops stay there, of course it’s a problem because [Belarus] is not going to be independent any more, ”he said.

The Belarusian border with Lithuania and Poland is just 100km from the Russian exclave of Kaliningrad, a stretch known as the Suwalki Gap that is considered one of NATO’s biggest vulnerabilities.

“I don’t think Russia is going to challenge NATO at the moment. But of course, there’s a problem with migration later on if something happens, ”Karis said.

Lithuania accused Belarus of “weaponsising” migrants last summer by pushing them to its border. Minsk later deployed the same tactics against neighboring Poland and Latvia with suspicions in all three countries that Moscow had played a part.

Karis, who took over in October as Estonia’s president having been head of the national museum and the country’s auditor general, revealed that Estonia suffered 150 attempted cyber attacks per day and that “the attempts are so many it’s difficult to follow”.

He also warned of the dangers of leaders such as France’s Emmanuel Macron and Olaf Scholz of Germany having one-on-one talks with Russia’s Vladimir Putin, after Nato hitherto presented a unified front to Moscow. 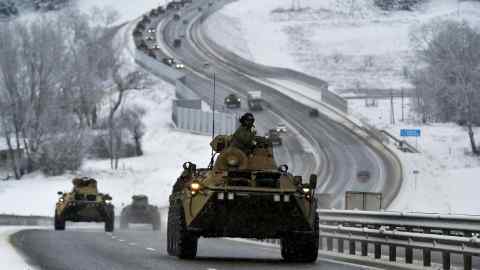 “People are getting worried about these bilateral contacts of different politicians, and getting worried things are going to be decided behind their backs or over their heads. It’s something you have to watch as well and be concerned, ”Karis said.

He added: “Putin did not expect this kind of unity in NATO or Europe. This is why he started this kind of bilateral discussions with different leaders, either with friends or not so friends. ”

Baltic politicians are particularly concerned that a western leader could try to offer a compromise, such as stopping military exercises in bordering Russia.

“The sayings from the Russia side are that they don’t want war. But they probably want some sphere of influence, especially over Ukraine and Belarus, and maybe all over the eastern part of Europe, ”Karis said.

Karis said countries in eastern Europe viewed things differently to those in the west of the continent because of their histories. The Soviet Union occupied and then annexed Estonia and the other Baltic countries in the 1940s.

He described the demand for NATO’s borders to be returned to their 1997 state – before Estonia or 13 other countries joined – as “unimaginable” but said there were some things that could be discussed, such as greater transparency over military exercises.