The EU is considering new measures to ensure digital assets are not used to dodge sanctions against Russia as the bloc toughens its enforcement of the financial penalties imposed on Moscow in the past week.

EU finance ministers and other officials discussed on Wednesday the risk that cryptocurrencies could be used to circumvent sanctions, officials said.

Among those who pushed in a video conference call for action was Christine Lagarde, the European Central Bank president. Bruno Le Maire, the French finance minister, said after the meeting that steps were under consideration to “further increase the effectiveness” of sanctions and avoid any circumvention of measures – including through cryptocurrencies. The commission is now expected to consider proposals to deal with the issue.

The discussion in Europe comes as lawmakers in the US and UK also raised concerns that crypto transactions could become a back door for moving money to and from Russia, undermining western efforts to isolate the country from the global financial system. 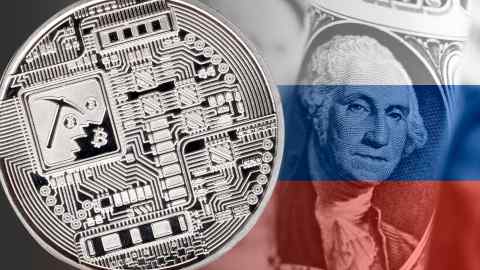 Many large crypto exchanges, including those based in offshore jurisdictions, have pledged to honor existing sanctions but resisted calls for a blanket ban on dealing with Russia. Several exchanges said broad restrictions would hurt ordinary Russians and run contrary to cryptocurrencies’ founding libertarian ideology.

“If people want to avoid sanctions there are always multiple methods,” Changpeng Zhao, Binance chief executive, told the BBC on Wednesday. “You can do it using cash, using diamonds, using gold. I don’t think crypto is anything special. ”

During the call, Lagarde argued in favor of legislation so that firms engaged in the issuance of crypto assets or providing services related to them should not deal with clients in Russia, according to people familiar with the meeting. The goal, she argued, was to avoid using digital assets to get around the sanctions and this week’s decision to disconnect seven Russian banks from Swift.

In an interview with the FT earlier, Paolo Gentiloni, the EU’s economics commissioner, said authorities had noted an increase in the use of cryptocurrencies in recent days, which he said “could be a way to bypass the measures taken to freeze the assets in Russia . ”

In the US, a group of Democrats on the influential Senate banking committee wrote a letter to Janet Yellen, the Treasury secretary, expressing their worries that cryptocurrency could be used to evade sanctions.

“Strong enforcement of sanctions compliance in the cryptocurrency industry is critical given that digital assets, which allow entities to bypass the traditional financial system, may increasingly be used as a tool for sanctions evasion,” wrote the senators, including Sherrod Brown of Ohio. chair of the panel, Mark Warner of Virginia, and Elizabeth Warren of Massachusetts.

The lawmakers said they were concerned that the Office of Foreign Assets Control, the arm of the Treasury which oversees US sanction policy, “has not developed sufficiently strong and effective procedures for enforcement in the cryptocurrency industry.”

The US Treasury declined to comment on the letter, but a US official noted that it would be difficult for Russia and its wealthy individuals to use cryptocurrency in a substantial way to evade sanctions.

“You can’t run a G20 economy on crypto. Big banks in an economy need real liquidity and conducting large transactions in virtual currency is likely to be slow and expensive, ”the official said.

UK lawmakers have also responded to the risk of crypto being used to evade or undermine sanctions. “We are considering how the UK along with its allies can prevent crypto assets from emerging as loopholes to evade sanctions,” Baroness Penn, a government whip, said in the House of Lords on Wednesday.

UK MP Tom Tugendhat, chair of the foreign affairs committee, and Tory peer Lord Sarfraz wrote to the Financial Conduct Authority this week, urging the regulator to issue new guidance to crypto firms on the sanctions regime. “There remains a considerable risk of Russian individuals and entities sanctioned last week, continuing to trade in cryptocurrency assets,” they said.

The FCA said it had “reached out to each crypto firm registered with us to ensure that they are aware of sanctions and their responsibilities” and was “working with partners to actively monitor these firms”. “We have made it clear to crypto firms, banks and others that we expect them to focus on their sanction controls and, with our partners, we will be supervising their actions.”