European stocks dropped on Tuesday, following another day of sharp declines for Chinese equities, as investors weighed the potential economic implications of the war in Ukraine and the prospect of monetary policy tightening by the US Federal Reserve

Russia’s invasion of Ukraine late last month had left Europe “flirting on the brink of recession,” said Peter Oppenheimer, chief global equity strategist at Goldman Sachs, who added that the fighting would have stoke inflation and damp growth.

Across the Atlantic, US futures tracking Wall Street’s S&P 500 index and the technology-heavy Nasdaq Composite, which is particularly sensitive to interest rates, fell 0.4 per cent and 0.3 per cent respectively following declines in the previous session.

The moves come ahead of a two-day Fed meeting starting on Tuesday, when the US central bank is expected to increase interest rates by 0.25 percentage points, raising borrowing costs for the first time since slashing them to zero at the start of the coronavirus pandemic as it attempts to curb inflation that was running at a 40-year high even before Russia invaded Ukraine.

Tighter monetary policy would hurt fixed income, stock prices, corporate earnings and valuations, said Mike Zigmont, head of trading and research at Harvest Volatility Management. “Throw in a side dish of Russian war and one can understand why investors are lacking enthusiasm at the moment,” he said. 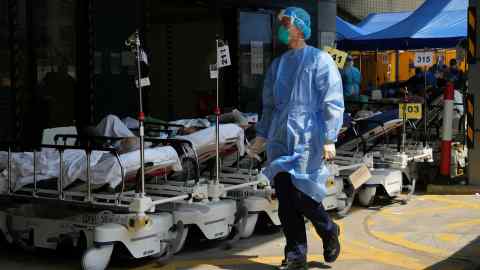 In Asia, shares in China and Hong Kong fell for a second day as investors grappled with a worsening Covid-19 outbreak in the mainland and reports that Beijing had signaled its willingness to provide Russia with military assistance to support its invasion of Ukraine.

The declines followed sharp falls the previous day, when Chinese stocks in Hong Kong fell the most since 2008 after authorities imposed lockdowns in multiple cities, including the technology and manufacturing hub of Shenzhen.

China reported more than 3,500 new cases on Monday, up from fewer than 1,400 a day earlier. The surge in cases has put pressure on Beijing’s capacity to maintain its strict approach of eradicating outbreaks through citywide lockdowns, testing and contact tracing.

Oil prices continued to drop as concerns over disruption to supplies from the Russian invasion of Ukraine eased. Brent crude, the international benchmark, fell 5.7 per cent to $ 100.85 a barrel.