Russia is returning some troops to their bases after military exercises were completed, the defense ministry said on Tuesday, signaling some de-escalation of the military build-up on Ukraine’s eastern border.

European equities and US stock futures rose while the oil price fell on news that units from Russia’s southern and western military districts were heading back to base following the completion of drills.

“The units of the southern and western military districts, which have completed their tasks, have already started loading on rail and road transport and will start moving to their military garrisons today. Individual units will march on their own as part of military columns, ”said Igor Konashenkov, defense ministry spokesman.

The news came shortly before Olaf Scholz, Germany’s new chancellor, met Vladimir Putin in Moscow in the latest in a series of last-ditch efforts by western leaders to talk the Russian president out of invading Ukraine.

The two men sat at opposite ends of a long table, which the Kremlin said was a social distancing measure after Scholz opted not to take a Russian-administered Covid-19 test.

Europe’s Stoxx 600 equities index jumped 1.3 per cent in morning trading, a sharp reversal from a fall on Monday prompted by a US warning that a Russian invasion of Ukraine could be imminent. US S&P 500 futures rose 1.4 per cent.

The ruble also gained on the news, rallying 1.8 per cent against the US dollar, while Ukraine’s currency, the hryvnia, advanced 1.8 per cent. The trading on Tuesday contrasted with the previous day, when key equities markets were hit by concerns that Russia could invade Ukraine in the coming days.

Kremlin spokesman Dmitry Peskov dismissed US claims of an imminent Russian invasion as “information madness” and blamed the west for the tensions around Ukraine.

“This is nothing but an unprecedented campaign to provoke and stoke tensions in Europe,” he told reporters. He said the exercises were part of regular deployments and would continue in the future.

“Russia has always held exercises on all of its territory,” Peskov said. “We always said that the troops will go back to their bases after the exercises end [ . . . ] That is what is happening now. There is nothing new here. ”

Russia is also conducting joint military exercises in Belarus that are expected to continue until February 20.

Dmytro Kuleba, Ukraine’s foreign minister, said during a briefing on Tuesday on the issue of a Russian pullback: “Different statements are constantly being made from the Russian Federation, so we already have a rule: we will see, then we will believe.”

Russia is estimated to have maintained a force of more than 100,000 troops near Ukraine in recent weeks, while a further 30,000 have been taking part in exercises in neighboring Belarus. 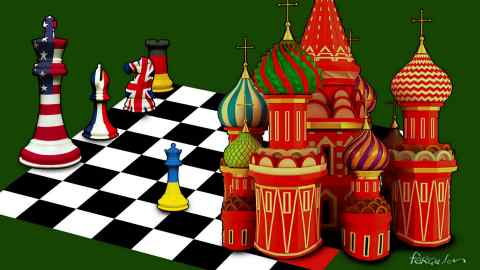 Russia has threatened “the most unpredictable and grave consequences” if the west does not agree to two draft security protocols that would roll back NATO’s presence in eastern Europe.

Foreign Minister Sergei Lavrov said Moscow would continue dialogue with the west and expressed interest in holding further talks on topics such as intermediate-range nuclear missiles and deconfliction measures.

“By working on all these issues together, we could come up with a pretty decent package,” Lavrov said.

But in a sign of ongoing tensions, the lower house of parliament asked Putin to sign a resolution recognizing two Moscow-backed separatist states in eastern Ukraine.

The Kremlin has given no indication as to whether Putin will back the measure, which would likely put an end to the fraught Minsk peace process governing the conflict in Ukraine’s eastern Donbas region.