The last time she campaigned for the Colombian presidency, Ingrid Betancourt was kidnapped by Marxist guerrillas and held in the jungle for more than six years. Two decades later, she is making a new bid for the country’s leadership.

Now 60 and back in her homeland after spells in France and the UK, the former congresswoman and senator launched her campaign in Bogotá in recent days. She will compete in a center-left primary in March and if successful will go on to the presidential vote in May.

The move marks an extraordinary comeback for a woman who came close to death during her ordeal at the hands of the Marxist guerrilla group, the Farc, from 2002 to 2008. She was kept in a wooden cage and sometimes chained to a tree by her neck . She suffered from hepatitis and malaria and at one point was vomiting blood.

Betancourt was kidnapped by the Farc in southern Colombia while she campaigned for the 2002 election.

Her story made international headlines, particularly in France, where she has citizenship from her first marriage to a French diplomat. The governments of Jacques Chirac and Nicolas Sarkozy sent envoys to Colombia to secure her release.

The Colombian military eventually rescued her and 14 other captives, infiltrating the Farc and posing as guerrillas and humanitarian workers before whisking the hostages to safety by helicopter.

Betancourt enters a presidential race which is still wide open. 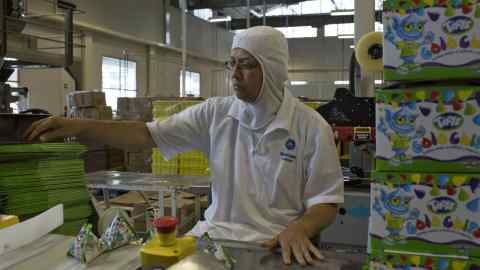 The incumbent, Iván Duque, cannot stand for re-election and his rightwing administration is unpopular. Until now, the conservatives have relied on the popularity of former president Álvaro Uribe to drum up support for their cause, but his star is waning.

The leftwing candidate, Gustavo Petro, who came second to Duque four years ago, leads most polls. He points to the successes of radical leftists in Peru and Chile in 2021 as evidence of what might happen in Colombia this year. The prospect of a Petro victory has unnerved the business community.

In the center, there are two coalitions, both of which will hold primaries on March 13 to choose their candidate. Betancourt, who heads a small Green party, is in the more left-leaning of the two blocks.

She will face stiff competition from the former mayor of Medellín, Sergio Fajardo, former health minister Alejandro Gaviria and Juan Manuel Galán, whose father Luis Carlos Galán was a famous liberal assassinated in 1989 while campaigning for the presidency.

The wild card candidate in this year’s vote is Rodolfo Hernández, a 76-year-old populist and businessman who is running independently and rails against the political establishment of both right and left. Some recent polls suggest he is second in voter intentions behind Petro.

Betancourt is campaigning primarily on an anti-corruption ticket and also as the most prominent woman in the field. If she wins, she will become the first female president in Colombia’s history. At her campaign launch she said the country had been locked in “a regime of masculine violence” for decades.

She is also a passionate supporter of Colombia’s peace process, even though it gives the former Farc guerrillas some political power and ensures many of them will escape the jail for their crimes.

Last year, for the first time, Betancourt came face to face with the Farc’s leaders in an act of reconciliation – a consequence of the guerrillas’ decision to sign a peace deal with the state in 2016.

“It was a very hard moment,” she told the Financial Times the following day. “They [the former guerrillas] are, like many Colombians, still traumatized by the war. There is something broken in them. They are incapable of connecting their hearts to their minds. They are still warriors. ”

“Colombian society is also traumatized by the war,” she added, arguing that the half-century conflict that claimed over a quarter of a million lives had hardened many of her compatriots to the point of insensitivity.

Betancourt is sometimes criticized in her home country for “not being Colombian enough”.

She was educated at an English boarding school and the prestigious Institut d’études politiques (Institute of Political Studies) in Paris, and has spent much of her adult life in Europe. For the past four years she has been doing a PhD in theology at Oxford University.

But Betancourt has said this distance from her homeland has allowed her to stand back from the suffocating ideological arguments between left and right and the endless recriminations over the Colombian conflict.

“We need to have a candidate that can congregate the center,” she said, following the Farc reconciliation last year. “Colombia needs a voice that comes from outside.”