Sanjeev Gupta has turned to an obscure bank he owns in Romania to process transactions, as criminal probes draw scrutiny on his troubled metals empire in the wake of his main lender Greensill Capital’s collapse.

BRCI has processed a number of payments for businesses in Gupta’s GFG Alliance in the past year, according to people familiar with the transactions and documents seen by the Financial Times.

The documents show that Gupta’s business last year used a bank account at BRCI for a contentious carbon credits transaction, struck the month after Greensill’s collapse sparked a liquidity crisis at GFG.

In that April 2021 deal, Gupta’s Czech steelworks sold carbon emission allowances worth about € 40mn to its sister plant in the Romanian city of Galati, provoking outcry from Czech politicians.

Murali Subramanian, who oversees Gupta’s banking arm from Dubai and sits on BRCI’s board, told the FT the bank provides “non-credit services” to companies within the GFG Alliance. However, he said GFG companies made up only a “small fraction” of the bank’s client base.

Banks have to abide by strict anti-money laundering rules and Gupta’s businesses are under criminal investigation for alleged money laundering in both the UK and France.

People familiar with the transactions said GFG had turned to BRCI to process certain payments given heightened scrutiny from other financial institutions.

Subramanian disputed this, however, insisting BRCI has “very strong AML and compliance functions”.

“BRCI would not be obliged to carry [transactions] out, ”he said. “It wouldn’t be held to GFG to do everything it needs to do.”

“BRCI is governed by the regulatory framework overseen by the National Bank of Romania (NBR) and operates in line with its rules and decrees, as well as those of Romanian commercial law,” the bank added.

GFG said BRCI was “one of a number of Romanian banks which handles the collections and remittance of funds for transactions on behalf of Liberty Galati”.

While Gupta is best-known for borrowing billions from Greensill to buy up steelworks around the world, the metals magnate also sought to establish his own financial services empire spanning from banking to insurance. Wyelands Bank gathered £ 700mn from savers at its peak but was forced to return deposits last year amid rising concerns over its financial position.

The steel baron took over Romania’s BRCI in February 2020, days after the FT revealed that Wyelands had channeled money into Gupta’s wider business empire through entities his employees often referred to as “Friends of Sanjeev”.

BRCI appears to have previously provided financing linked to GFG. Documents seen by the FT show that the bank had outstanding credit facilities related to Gupta’s Liberty Commodities trading business, around the time Greensill collapsed.

So-called related party lending, when a bank’s funds are lent out to businesses connected to its owner, was at the heart of the Wyelands scandal. Andrew Bailey, governor of the Bank of England, revealed last year that regulators had referred the bank to the National Crime Agency and the Serious Fraud Office after probing its “connected lending” related to Gupta.

Subramanian told the FT that BRCI had only done small amounts of lending connected to GFG, however, within a regulatory limit that restricts the amount outstanding to 20 per cent of its capital base.

“BRCI is way below that, it’s single digits – 7 or 8 per cent,” he said, adding that these exposures were not direct loans to GFG companies but so-called letters of credit and financing provided against customer invoices. 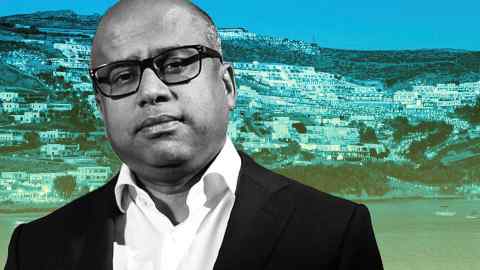 The FT reported last year that Gupta’s Liberty Commodities had raised funding from Greensill using suspect invoices that appeared to show signs of fraud. The UK accounting regulator last week opened an investigation into the auditor of the commodities trading unit.

BRCI said it “provides limited factoring to a very small number of Liberty Galati’s Romanian customers”. The bank added that it was “well-capitalized” and the majority of its € 65mn in assets consisted of “high quality, liquid assets”.

While Wyelands and BRCI are the only regulated banks that Gupta owns, the metals magnate has looked at acquiring other lenders.

He entered talks to acquire Italy’s Aigis Banca in 2020 but did not complete the transaction. The small Italian lender later collapsed because of the exposure to Gupta’s businesses in which it had invested via Greensill.

Gupta also considered buying a number of Greek banks that year, according to people familiar with the matter, including specialist shipping lender Aegean Baltic Bank. The bank did not respond to a request for comment.