Downing Street will on Monday bring forward legislation designed to crack down on the flow of “dirty money” into the UK in a fresh rebuke to Russian President Vladimir Putin for his invasion of Ukraine.

Number 10 will put forward a new “economic crime bill” that will introduce a register of overseas entities highlighting the ultimate owners of overseas companies that control property and land in the UK.

The long-awaited measure was first proposed several years ago in order to tackle the £ 100bn of illicit financing that the National Crime Agency estimates is channelled through the UK each year.

Although draft legislation was drawn up in 2018, it was subsequently put on hold to the frustration of anti-corruption campaigners who claim London has become a “laundromat” for illicit financing.

The new register will require anonymous foreign owners of UK property to reveal their identities to ensure that criminals cannot hide behind secretive chains of shell companies.

Those who did not declare their beneficial owner would face restrictions over selling their property and up to five years in prison, the government said.

The bill will also include measures to strengthen the system of “unexplained wealth orders”, through which authorities can order people to disclose the source of their wealth which is liable to be forfeited if they cannot prove it has gained legitimately.

Those who hold property in the UK through a trust will be brought within the scope of the rules. The bill will also include measures to limit financial risk to law enforcement agencies from pursuing UWO cases by capping the cost of unsuccessful actions by authorities such as the NCA, HM Revenue & Customs and the Serious Fraud Office.

Many ministers believe that the cost of failed UWO partly explains why only a handful of actions have been pursued since their introduction in 2018. Agencies will also be given more time to review material provided in response to a UWO.

Separately, the Treasury will step up its enforcement of sanctions by introducing a more broad-ranging “strict civil liability test” for monetary penalties. Currently companies are only liable if they have knowledge or a “reasonable reason to suspect” that sanctions are being breached.

That move should make it easier for the Office for Financial Sanctions Implementation (OFSI) to impose significant fines. OFSI has been criticized for only issuing six fines since it was set up in 2016.

Ministers will also publish a white paper setting out medium-term proposals for reforms of Companies House to insist applicants provide more details of their identity when trying to set up companies.

The reforms – including a more digitized filing process for small companies – will be legislated for in a second economic crime bill, which will propose government greater powers to seize crypto assets to tackle the growing threat from the use of online currencies for money laundering.

Finally, a new “kleptocracy cell” specialist team will be created within the NCA to investigate sanctions evasion.

In January, plans for an economic crime bill were pushed back until the 2023-24 parliamentary session in favor of measures with “more mass appeal”. 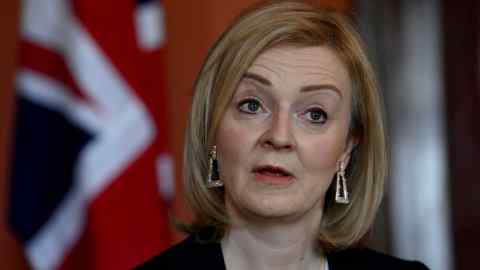 But the bill’s progress has been accelerated as a result of Russia’s invasion of Ukraine.

Liz Truss, foreign secretary, said on Sunday that the UK government had compiled a “hit list” of oligarchs, citing more than 100 billionaires in Russia, and “every few weeks” would sanction new oligarchs.

“There will be a rolling program of sanctions. . . we are targeting oligarchs’ private jets, we will be targeting their properties and other possessions they have. There will be nowhere to hide, ”she told Sky News.

Britain’s opposition Labor party on Sunday called for stronger sanctions against Russia and a ban on luxury goods exports to inflict “the severest possible consequences” on the Putin regime.

Labor also called for financial sanctions to be expanded to cover insurance and limit the supply of goods, services and technology to strategic sectors including energy.