Neil Rankin is an unlikely plant-based food entrepreneur. The 45-year-old Scot made his name spearheading London’s barbecue restaurant boom a decade ago, serving up steaks, ribs and whole carcasses cooked on open fires.

After deciding that serving even sustainably reared meat would do little to reverse the environmental impact of the industry, he pivoted to vegan burgers and sausages, developing his product in his home kitchen. “I’ve cooked millions of steaks over the past 10 years or so. I think I’ve come to the end of [cooking meat] and plant-based is just so uncharted,” he says.

Eschewing the use of protein processed from legumes such as soya or peas, favoured by many makers of plant-based meat, his quest for a sustainable alternative using vegetables led him to a vegan “meat” using fermented onions, beets and mushrooms.

Bean patties and tofu burgers have been around for decades, but consumer interest in the new generation of plant-based meats, mimicking the taste, texture and smell of animal meat, surged around the flotation of US start-up Beyond Meat in 2019.

But the push by Rankin coincides with a faltering in sales growth in the sector. After a 46 per cent rise in 2020 on the back of soaring demand at the start of the pandemic, sales in plant-based meat in the US in 2021 fell 0.5 per cent, according to data provider SPINS. In the UK, Kantar numbers show that sales tailed off in the second half of last year, although in December they experienced a rebound.

“We have probably had a bit of a hype cycle, with an awful lot of people trying things once or twice,” says Will Hayllar, global managing partner of OC&C Strategy Consultants. “That has driven very rapid growth.”

The slowdown in growth has taken some executives by surprise. Many had anticipated that the continuing anxiety over climate change and the environmental cost of the meat industry — which accounts for 15 per cent of global carbon emissions — would act as a major spur for plant-based faux meat. Created with the help of biochemists and molecular scientists, it offers a way of cutting meat intake without sacrificing something that many consumers crave and love.

“This category has decelerated across the board,” Michael McCain, chief executive of Maple Leaf Foods, told analysts in November as he announced a review of the Canadian group’s plant-based meat business. Investors have also been unnerved by Beyond Meat’s performance, blamed on a range of issues from Covid-related labour shortages to outages at its facilities, for its relatively subdued US revenue outlook. Its shares now trade at about a quarter of its 2019 peak and the lossmaking group’s market capitalisation, once above $15bn, has slipped below $4bn.

Rankin believes the ebbing of the sales surge is down to products which fail to meet taste expectations. “There are a lot of people that have moved to plant-based because of sustainability issues, but yet they aren’t really satisfied with what’s out there,” he says. Price has also been an issue as plant-based meat makers have struggled to get repeat purchases from customers once the initial excitement has died down.

During the pandemic, plant-based meat had its “big audition” which triggered the large jump in sales in 2020, says Arlin Wasserman, founder of food strategy consultancy Changing Tastes. But long term that seems to have actually worked against the category, especially in the US.

Buying in large quantities during the lockdowns highlighted “the shortcomings of next-generation plant-based meats”, Wasserman adds. He blames the long list of ingredients with unfamiliar names for making the product look like highly processed food and acting as a barrier to repeat purchases.

“Consumers may buy it once, but after reading the label, slow down their purchases,” he says.

In a Changing Tastes survey of 3,000 adults in the US in December, about 40 per cent said they did not eat plant-based meats or would not eat them in the future despite 39 per cent saying they wanted to reduce their red meat consumption. “It’s an extremely high negative for such a new idea,” says Wasserman.

Clues as to whether plant-based meat is just another fad might be found in the “Gartner hype cycle” of emerging technologies, say agritech consultants and investment experts. Developed by the US research and consultancy group, the curve illustrates what it says are the five phases in the lifecycle of a new technology — the initial surge in expectations and then disappointment when it does not deliver, leading to consolidation or company failures, improved product, and finally mainstream adoption.

Many innovations, including mobile phones, artificial intelligence and electric vehicles follow the cycle. Plant-based meat along with other agri-technologies, such as insects for food and vertical farming, can be plotted against the same curve, says Henry Gordon-Smith, founder of consultancy Agritecture. For plant-based meat, “we are over the peak and already into the ‘trough of disillusionment’.” Gordon-Smith characterises this as a period where start-up failures and industry consolidation lead to improved efficiencies, stronger players and better products, fuelling renewed growth.

The sustainability reasons for reducing consumption of meat — the production of which also contributes to land degradation and water pollution — remain compelling, with the global population predicted to rise by another 2bn before 2050. Continuing investment is being made into alternative proteins, with $3bn raised globally by plant-based start-ups in 2021, up 74 per cent from a year earlier, according to data group PitchBook.

Massimo Zucchero, head of plant-based meal solutions at Nestlé, the world’s largest food group, blames slower US sales growth on reduced media interest and retailers rethinking their strategies and reorganising shelf space. In Europe there is high double-digit growth across most countries, he says. “Yes, there has been a slowdown. [But] the market is going to start growing again.”

Nestlé estimates the value of the plant-based meat category to be around $8bn in terms of sales, with potential growth of around 20 per cent per annum across the next five years.

Hanneke Faber, president of Unilever’s foods division, echoes Zucchero. She too believes that the US phenomenon is temporary and predicts that “going forward this market will continue to grow in the 20 per cent range” every year.

Whether such projections are more than wishful thinking remains unclear. It is easy to eat a plant-based burger at a restaurant, but breaking a shopping habit and wondering if other family members will join in is more difficult, says Hayllar.

“Changing people’s meal consumption habits, changing the way they cook, that tends to be a slower thing to happen.”

The fight for the ‘centre of the plate’

For large food companies, plant-based proteins have widened the opportunity to compete for what they call the “centre of the plate” in western markets, which have for decades been dominated by meat processors and farmers. Now, multinationals are racing to build a business in plant-based protein alternatives, as well as investing for the future in lab-grown meat.

At a tasting event on a floating hotel in London last year, Nestle’s chief executive Mark Schneider predicted that every animal protein would over time have a plant-based alternative as he introduced the company’s latest faux shrimp and egg products, as well as plant-based sausages, mince and chicken alternatives. Fake ham and smoked salmon are also under development.

Hayllar says plant-based protein appeals to consumer goods makers such as Nestlé and Unilever because it is branded, not commodified, enabling them to tap into their marketing strengths and create price differentiation between premium and everyday versions of the product. “One of the interesting things about the [worldwide] shift to plant-based is that it’s been a brand-led move, whereas in a market like the UK the meat is almost all private label [or unbranded] . . . one of the appeals for businesses . . . is that they can market [these products] to shift consumer behaviour,” he adds.

Investing in alternative proteins, including plant-based meats, also offers larger companies the opportunity to burnish their environmental credentials for investors. “It’s one thing they can add to their annual report helping reputational gains. Some see it as a social cost to operate,” says JP Frossard, consumer foods analyst at Rabobank in New York.

Investor advisory and research network Fairr — Farm Animal Investment Risk and Return — backed by institutional investors managing about $47tn, has called on food and meat companies as well as restaurants and retailers to increase their alternative protein offerings to enhance returns and mitigate future supply risk.

Continuous spending on research and development into areas from taste and texture to health and nutrition is needed to make meaningful inroads into plant-based foods and maintain consumer interest, say executives. Unilever, for example, spent €85m on a food innovation research centre at the Wageningen University campus in the Netherlands, with a focus on plant-based ingredients and meat alternatives and other products such as ice cream and mayonnaise, according to Faber.

Frossard says: “You’re not going to survive unless you continue research for a better product — focus needs to be on affordability and taste.”

At a tasting event at a restaurant in London’s Leicester Square, more than 100 of the city’s chefs last November marked the arrival of the latest innovation from Israeli start-up Redefine Meat. The company became the first to commercially launch a “structured” plant-based meat, and the chefs tucked into dishes including “beef cut au poivre” and “lamb cut la Dijonnaise” made from meat produced via a 3D printer.

For the large part, faux meat products have been those made from ingredients pushed through an extruder to resemble mince. Apart from cracking the “holy grail” of cuts of meat, Redefine co-founder Eshchar Ben-Shitrit believes the start-up has worked out how to reproduce the juiciness of real meat.

The next big thing in alternative proteins will be the eventual commercial launch of meats made from cow, pig and chicken cells grown in vats. Although not vegetarian, they are expected to generate lower emissions than live animals. Having gained the world’s first regulatory approval in Singapore in 2020, entrepreneurs behind lab-grown meat are hoping that sometime this year, US food authorities will give it the nod.

Despite the dystopian images of scientists creating meat in laboratories, many consumers in the west seem oblivious to the rise of technology in food, say analysts. R&D has long been a feature in the food industry, with tastes, smells and textures carefully analysed and developed.

“I don’t think many consumers will be put off by the food being invented in a laboratory with some exceptions,” says Wasserman. “So it’s more about how it is produced after it’s invented.”

Executives and analysts believe that the opportunities are too big for plant-based meat to be a flash in the pan. Indeed, the Good Food Institute, a lobbying and consultancy group for alternative proteins, believes that the industry will need five to 10 times more production capacity by 2030 to satisfy demand.

Nestlé sees various opportunities in the category, including emerging markets, especially in Asia where vegan protein-rich products such as tofu have been around for centuries and where consumers are discovering new plant-based foods. 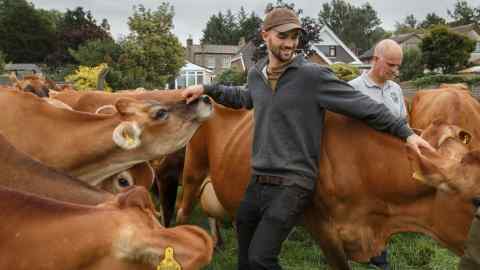 Another area is a whole different plant-based segment that does not try to mimic meat. This is about “putting vegetables at the heart of, the centre of the plate, in a delicious way,” says Zucchero. His colleague Wayne England, head of food strategy at Nestlé, says demand for meat will need to be satisfied by alternative sources because current levels of consumption are not environmentally sustainable. “There is so much more to come to the category,” he says, “the world cannot feed itself with so much meat.”

It is not just the multinationals pushing R&D efforts. On the other end of the spectrum, Rankin says he is busy with development of his own.

He is working on a healthy fat using seaweed and fermented tomatoes and is also looking at the byproducts from his manufacturing process, including the liquid that comes off the fermentation of vegetables which might be turned into products such as gravy. Turning leftover sourdough bread into miso instead of importing the soyabean-based condiment from Japan is another project.