Hedge funds have been cranking up their bets against sustainable energy stocks, wagering that as interest rates rise, investors will be less forgiving of companies with strong environmental credentials but weak earnings.

Shares in sustainable stocks have drawn in billions of dollars of inflows from ethically minded investors in recent years, lifting the valuations of some stocks to eye-watering levels.

Already, some of those stocks have fled to fall back as the US Federal Reserve prepares to start withdrawing its pandemic-era support – a process that is pulling down many high-growth assets, especially in the tech sector. But doubters say green stocks have much further to fall.

“In a bear market, a company doesn’t trade at 60 times earnings just because it does something morally good,” said Barry Norris, chief investment officer at Argonaut Capital. “People will be a bit more hard-nosed about it.”

The company’s shares soared from DKr130 at the start of 2020 to peak briefly above DKr300 a year ago, although they have fallen back to about DKr170. However, Norris believes Vestas, whose margins are contracting, is now “the most expensive it has ever been”.

Shares in green companies are not the only ones trading with elevated valuations. Tesla, the electric car maker, is priced at a forward price to earnings rate of 92 times, while Nvidia, another popular stock in recent years, is priced at 43 times.

Germany’s Nordex has also been targeted by short-sellers, with bets against the wind turbine manufacturer soaring from 0.79 per cent of the company’s shares a year ago to more than 7 per cent, according to the Breakout Point data group. That makes it one of Europe’s most shorted stocks based on disclosed short positions.

Among hedge funds betting against it are $ 52bn-in-assets Millennium Management, AKO Capital and Gladstone Capital.

It is a risky strategy. Government-supported efforts to shift the global energy reliance away from fossil fuels point to heavy demand for companies in the sector. One executive told the Financial Times their fund “won’t touch” bets against such stocks, because of the increasingly favorable regulations and weight of money pouring into the sector.

But hedge funds in the US and UK have been buying the lowly valued shares of oil and gas companies discarded by investors focused on environmental, social and governance (ESG) factors.

Betting against companies whose stories of helping the environment are stronger than their earnings, or against those that have exaggerated their ethical credentials, has also become increasingly attractive.

The prospect of four rises in US interest rates this year is also now providing a challenge for lossmaking green stocks. Higher interest rates mean higher borrowing costs for companies and a lower value ascribed to future cash flows.

Funds have targeted hydrogen stocks, with disclosed bets against Norwegian hydrogen technology group Nel, which reported a loss of NKr1.4bn ($ 156m) in the first nine months of last year, jumping from 1.8 per cent a year ago to 7.8 per cent, according to Breakout Point. Helikon Investments, Crispin Odey’s Odey Asset Management and WorldQuant have short positions against Nel, whose shares have risen from NKr5 three years ago to more than NKr35 a year ago but have since dropped to about NKr11.

“There is no obvious valuation support with Nel,” said James Hanbury, a partner who manages about $ 1.3bn in assets at Odey, in a note to investors seen by the FT.

The company is “lossmaking, cash consumptive, they continue to fail to win material contracts or partnerships, their medium-term capex needs are not fully funded and, on top of this, the [Odey] team perceive the business to be a commoditised technology offering ”, he said.

He added that while hydrogen would play “a big role” in the transition to cleaner energy, there will “inevitably be many companies in the space that will not succeed economically”. Odey declined to comment.

A spokesman for Nel said the company is “the technology and market share leader in an industry that is at the beginning of significant growth and industrialization”, adding that its investment was “backed by a robust financial position”. 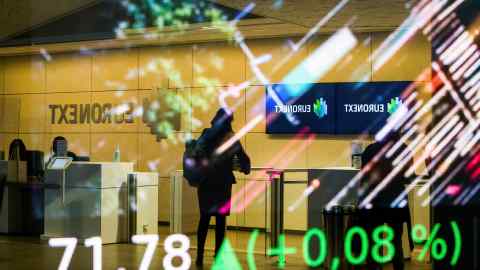 “We think the end game this year will be to short the Ark-type of stocks in solar [and] hydrogen, ”said Renaud Saleur, a former trader at Soros Fund Management who now heads Anaconda Invest, referring to more speculative groups. He is short hydrogen groups ITM Power and McPhy and solar technology company Enphase Energy.

Some managers have even risked bets against electric vehicle stocks, which has proved to be one of the most volatile corners of the market.

Argonaut’s Norris has put on a short position against Tesla in recent days, and is also betting against Rivian. He said the company, whose investors include Amazon and Daniel Loeb’s Third Point, is on a “ridiculous valuation” and lacks first-mover advantage in the sector, while he also highlighted Amazon’s recent decision to order electric vans from a rival.

“My view is that we’re going into a bear market and we’re past the point of peak speculation,” he said. “This is exactly the sort of stock you don’t want to own.”