A Honduran Supreme Court judge has ruled that former President Juan Orlando Hernández can be extradited to the US to face charges he took bribes from drug traffickers in exchange for protecting them.

Police arrested Hernández at his home in the Tegucigalpa capital last month, in response to a US extradition request that came just weeks after he left office. The former president was named as a co-conspirator in a drug case against his brother, who was jailed last year.

The US believes Hernández participated in a violent drug trafficking conspiracy for 18 years to ship cocaine to the US and take bribes. The former leader has denied the charges.

Honduras has never rejected a US extradition request but some had raised doubts over whether the court whose judges were appointed while Hernández was president would grant this one.

The court said on Wednesday that Hernández would remain in custody. His lawyer Félix Ávila said his client denied all charges and would appeal.

Hernández, who first came to power in 2014 but was unpopular at home by the time his second term ended, is the first former Latin American leader to be arrested and face extradition to the US on drug trafficking charges.

Hernández had previously been lauded by US government officials as an ally, even while he was being investigated by prosecutors.

Kamala Harris, the US vice president, attended Castro’s inauguration, with many seeing the new government as a potential US partner.

Analysts have warned that drug money has infiltrated deep into Honduran politics, leading US prosecutors and many local politicians to label the country a “narco-state”. 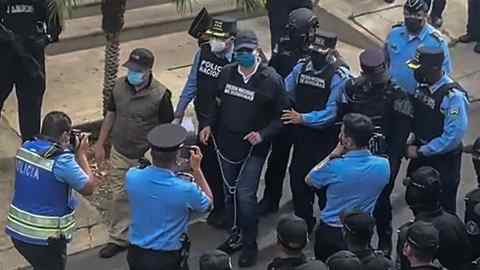 Castro took office in January and has vowed to be tough on corruption and drug trafficking. The president has asked the UN to help set up an anti-graft commission in the country.

The government has also taken emergency steps to try to put the country’s public finances in order, officials said.