India’s central bank is in initial consultations on a rupee-ruble trade arrangement with Moscow that would allow exports to Russia to continue after western sanctions restricted international payment mechanisms.

The talks, which would allow India to continue to buy Russian energy exports and other goods, risks angering Washington and its allies as they seek to punish Moscow for its war on Ukraine.

A senior banker briefed on discussions said the Reserve Bank of India (RBI) was consulting with government and state-owned banks to assess the scale of rupee-ruble payments required and which banks would be equipped to provide the service.

The person described the exercise as “stocktaking”, adding that a final decision on the proposal was up to the government.

“We have requested the government to have [the rupee-rouble] arrangement, ”Dr A Sakthivel, president of the Federation of Indian Export Organizations (FIEO), told the Financial Times. “So. [the] government is working on it. Very soon I think we’ll get this. “

Sammy Kotwani, president of the Indian Business Alliance in Moscow, characterized the possible mechanism as “I can give rubles to Sberbank and they can give me rupees in India”.

Western countries have imposed sweeping sanctions on Russia’s central bank and cut several of its lenders off from the Swift financial messaging system. But India, which has longstanding ties with Russia, its most important supplier of military equipment, has remained neutral.

To the chagrin of US officials, New Delhi has abstained from UN votes condemning Russia’s invasion of Ukraine, while keeping in close contact with Moscow and Kyiv as it evacuated thousands of Indian students from the war-torn country.

On Tuesday, Ami Bera, an Indian-American member of Congress, said that “India has a responsibility to ensure its actions do not directly or indirectly support Putin and his invasion.”

Denis Alipov, Russia’s ambassador to India, told reporters this month that Russia and India had ways of “co-operation and transactions independent of western […] financial mechanisms ”. Alipov added it was a “question of just adjusting”, which was “easy to do”.

“Other nations are banning exports to Russia, so it’s a good time for Indian exporters to enter into the Russian market,” Sakthivel of the FIEO added.

But a foreign trade executive argued that a rupee-ruble pact would risk a furious reaction from the US, which is India’s biggest export destination, buying more than $ 50bn of Indian goods per year.

“If I were the United States, I would be very mad if they did this because I don’t want India to undermine the power of the US dollar,” the executive said.

However, Sakthivel argued that New Delhi was “trying to strike a balance”.

“Our government is acting very carefully,” Sakthivel said. “It’s like walking on needles.” The FIEO is a government-created body that oversees India’s export promotion councils and represents more than 200,000 exporters.

India and Russia want to boost bilateral trade to $ 30bn by 2025, up from $ 8bn for the 2021 financial year, according to India’s official statistics. India has a trade deficit with Russia, from which it buys energy, fertilizers and jewels, while Indian exports to Russia are largely pharmaceuticals.

India and the Soviet Union co-operated extensively during the Cold War era. The Reserve Bank of India ran a rupee-ruble exchange scheme from the 1970s until 1992. The mutually agreed exchange rate only covered specific items, according to Indian government records, and some of the trade was barter.

Indian businesspeople said they expected a new rupee-ruble pact to be exercised through state-owned banks, such as the State Bank of India’s Russian unit in Moscow, Commercial Indo Bank, and Russia’s Sberbank, which has a branch in New Delhi.

Indian exporters hope the mechanism could release money they are owed by Russian clients, who cannot wire cash internationally because of the Swift restrictions. Sakthivel said the total outstanding debt to Indian exporters was not yet known. 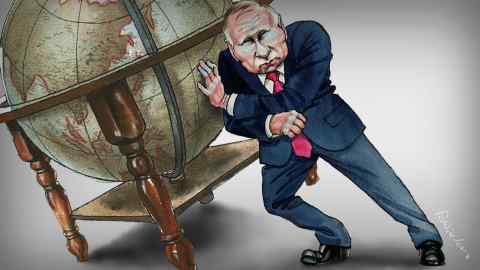 The foreign trade executive said a rupee-ruble arrangement could allow India to continue buying Russian energy in the event of an oil embargo. Russia was also India’s main supplier of weapons.

Yet the ruble’s wild swings, plus the rupee’s slide to record lows against the dollar, are deterrents for traders against striking new deals. Nor were Indian lenders generally in a hurry for Russian business, remarked Kotwani. “Banks in India are still paranoid,” he said.

But “if Europeans are going to close the door, somebody is going to open the door,” Kotwani said, arguing that Chinese businesses were quick to take advantage. “There are a lot of opportunities for Indians [in Russia] now, for sure. ”