Yasin has lost count of how many times he has been shot at – but he does remember the last time.

On January 10, Libyan militias and security forces opened fire as they moved in to disperse a months-long sit-in by more than 2,000 asylum seekers outside a United Nations compound in Tripoli, many of whom had been violently evicted from their homes in October during raids in the western town of Gargaresh.

“It would have been better to die than to be arrested,” Yasin, who has asked to go by a nickname for his own safety, told Al Jazeera by voice message.

The refugee from Sudan’s war-torn western region of Darfur was among the 600 people apprehended in front of the Community Day Center run by the UN refugee agency (UNHCR) and taken to the Ain Zara detention center, also in the Libyan capital.

Three detainees speaking to Al Jazeera on condition of anonymity recounted being beaten daily by the guards, deprived of adequate food and water and held indefinitely with no prospect of release in sight.

“It’s normal to be beaten in here. Everyone has been beaten, ”Yasin told Al Jazeera. “They treat you as if you are not human.”

Pictures and videos sent via Whatsapp show dozens of people crammed in one room, where they say they are left from 5pm until about midday the next day with no food or water.

“You are left alone with your hunger,” Yasin said.

When food comes, it consists of small portions of pasta, day after day. The little drinking water must also be saved for basic hygiene purposes as the bathroom shared by dozens rarely has running water. Those who found no other space to lay their blankets are obliged to sleep along the corridor, steps from overflowing latrines.

A group of asylum seekers last week staged a four-day hunger strike to protest against what they say are inhuman living conditions. Several people became too weak to stand and lay on the floor during open-air time.

At least eight of them were brought away by security guards and militia officers controlling the center, according to the testimonies of the three asylum seekers. Their fate is unknown.

Yasin said medics from the non-governmental organization Doctors Without Borders (MSF) who entered the facility to provide medical assistance on the fourth day of the hunger strike, pleaded with them to eat to stay alive. MSF has declined to comment for the purpose of this article.

More than 12,000 people are estimated to have been held in 27 prisons across Libya, according to statistics provided by Libyan authorities to the UN Support Mission in Libya.

Detention is often what awaits people who attempt to cross the Mediterranean and are intercepted by the Libyan coastguard, a quasi-military organization linked to militias that receives training and equipment from the European Union. According to UNHCR data, only 702 people were released from disembarkation points in the first six months of 2021, out of about 15,000 disembarked.

Yasin, who is in his early 30s, has spent most of his life in displacement. He first attempted to cross to Europe by sea in August 2020 but the Libyan coastguard intercepted the dinghy, which was not in distress but moving towards international waters.

The boat was brought back and its passengers disembarked in the port city of Zuwara, where the Sudanese refugee spent three months in a detention center not unlike Ain Zara. When a group of them managed to break a window in a bid to escape, the guards opened fire, killing at least one person, according to Yasin.

“This was our friend Nazar, who we lost in that prison by gunshot,” he texted, alongside a picture of a young man smiling in a green hoodie.

The second attempt to reach Italian shores was in May 2021. When the boat that was carrying him was intercepted and brought back to Tripoli, Yasin knew what awaited him. Bullets whizzed past him as he ran from his captors. Eventually, he reached Gargaresh, a known hub for refugees and migrants about 12km (7.5 miles) west of Tripoli. He rented an apartment with dozens of other asylum seekers, surviving on occasional work. 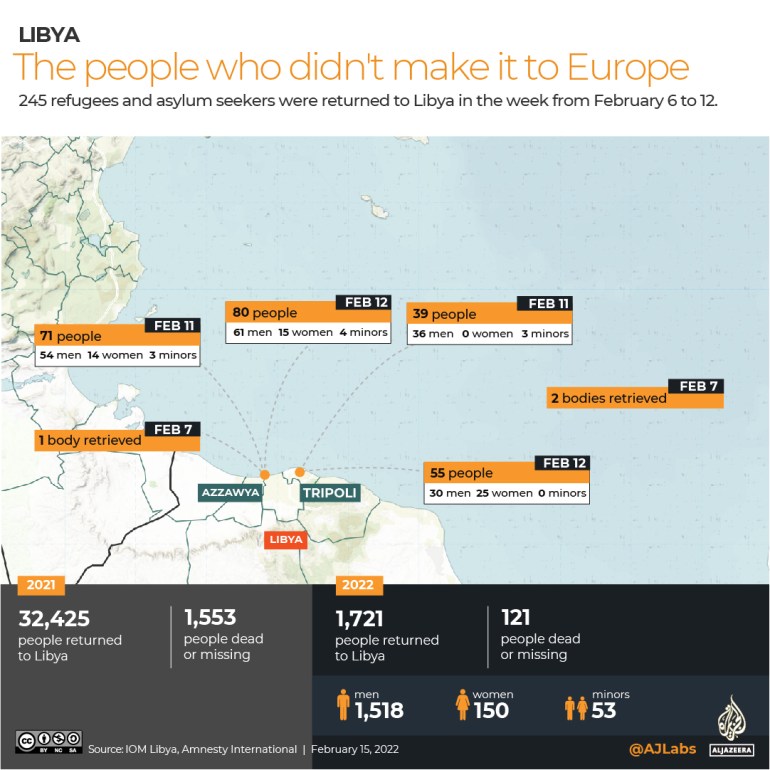 On October 1, raids in Gargaresh killed at least one asylum seeker as authorities used “excessive and disproportionate force,” according to a UN report (PDF). More than 5,000 people, including at least 1,000 women and children, were detained. The interior ministry, which led the crackdown, described the raid as a security campaign against undocumented migration and drug trafficking but made no mention of any traffickers or smugglers being arrested.

Yasin was among those who escaped and headed to the UNHCR Community Day Center to seek protection. The UNHCR said at the time it had suspended operations at the Community Day Center, citing unrest it attributed to “a number of individuals in the group preventing others from accessing the site for help”.

After camping outside the premises for more than 100 days, Yasin was caught up in the January 10 raid and brought to Ain Zara.

While he cannot recall how many times he has heard the rattling of gunfire, he does keep count of the times he has taken a shower. “In over a month that I have been here, I have managed to shower only once,” he said.

Refugees registered with the UNHCR, like Yasin, have asked the agency to provide protection and resettlement to a safe place. Between 2017 and June 2021, only 6,388 refugees have been transferred out of Libya. The majority are returned to sub-Saharan Africa, including Niger and Rwanda.

Yasin said he dreams to one day exit the “darkness” that has been his existence.

“I didn’t get any humanity, peace, freedom, justice, equality and happiness in my life,” he said.

The EU has spent more than 57.2 million euros ($ 64.8m) on Libya’s border management with the declared objective of “sav[ing] the lives of those making dangerous journeys by sea or land ”, according to a fact sheet published by the European Commission in June 2021.

But human rights watchdogs say saving lives is not the primary objective behind the support to Libyan authorities. “These operations are aimed at keeping migrants out of Europe,” Matteo de Bellis, researcher on asylum and migration at Amnesty International, told Al Jazeera.

The cooperation between European states and the Libyan coastguard began in 2016 and intensified the next year with the signing of two agreements – the Memorandum of Understanding (MoU) between Italy and Libya and the Malta declaration – that laid the foundations for the provision of assets, training and coordination assistance.

Additional technical assistance by Italy and the EU enabled Libya to declare its own Search And Rescue (SAR) zone, through a communiqué to the International Maritime Organization (IMO), in December 2017.

The following year, arrivals in Europe dropped seven-fold, according to data collected by the UNHCR. Interceptions and returns to Libya increased drastically, with 47 percent of all individuals who left Libya by boat being returned to the country (15,235 individuals in total).

According to Amnesty International, the Libyan SAR zone was established to bypass the principle of non-refoulement, which prohibits the return of people to countries where they face torture or other cruel, inhuman or degrading treatment.

“EU states have given Libya not only the tools to capture people at sea, but also the responsibility to decide where to take them, so EU leaders can pretend they have nothing to do with the arbitrary detention and torture that those people will suffer.” Bellis said.

Libya is not a signatory to the 1951 Refugee Convention or the 1967 protocol and does not have a national asylum system in place. It considers refugees, asylum seekers and migrants without official documentation as “illegal” migrants, liable to arrest and detention, without any judicial review process. 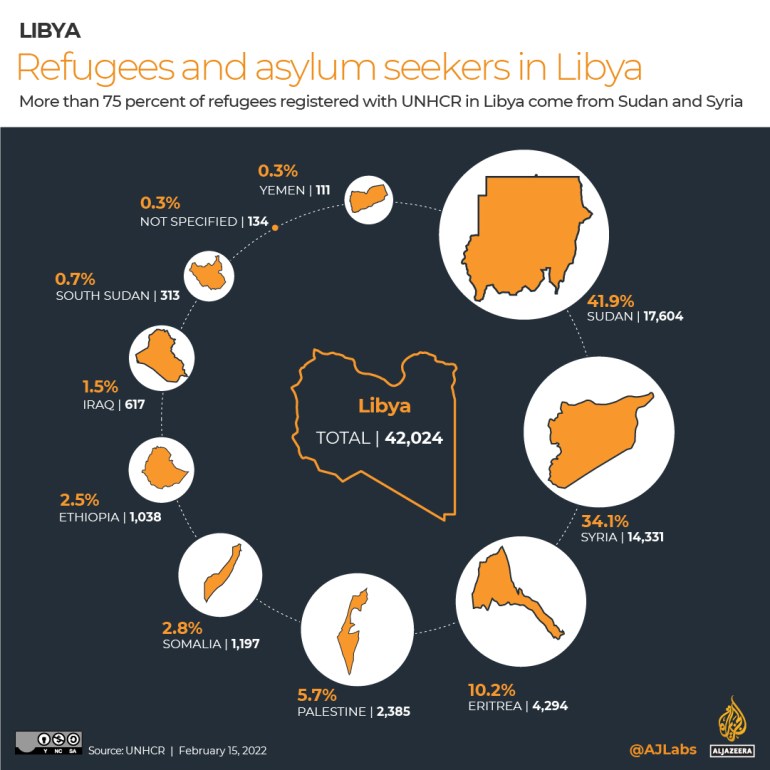 In June 2019, then-EU Migration Commissioner Dimitris Avramopoulos said the bloc’s “priority has always been and continues to be to prevent people from risking their lives on dangerous journeys”.

He added that the EU was working with Libyan authorities “to establish a standardized process with the aim to ensure migrants rescued by the Libyan coast guard are disembarked and taken to centers that meet international humanitarian standards.”

Testimonies and reports from UN and non-governmental agencies, however, point to ongoing and systematic human rights abuses. Last month, UN Secretary-General Antonio Guterres said he was “gravely concerned” about the situation in Libya, including for “several thousand migrants and refugees arbitrarily detained in detention centers”.

The UNHCR, which has limited access to detention facilities run by the Directorate for Combatting Illegal Migration under the Ministry of Interior, welcomed on February 15 the release from Ain Zara of 64 vulnerable refugees, including women and children.

“UNHCR has offered to work with the Libyan authorities together with other UN agencies in developing an action plan to address the overall situation of refugees and migrants in a humane and rights-based manner,” Caroline Gluck, UNHCR spokesperson in Libya, told Al Jazeera .

“This could form the basis of a longer-term national response to migration and refugee protection management, in line with international law.”

Peter Stano, EU lead spokesperson for foreign affairs and security policy, told Al Jazeera the conditions in which people are being held in Libya are “unacceptable”.

While the EU provides assistance inside detention centers through medical consultations and items such as hygiene kits, clothes and blankets, Stano said its money is not used to fund or facilitate the construction of detention centers.

“The current arbitrary detention system must end,” he added. “[We are] working with UN Agencies and International NGOs to… promote alternatives to detention and the establishment of safe spaces to address the needs of the most vulnerable. ”