Italian lawmakers unleashed a deluge of blank votes in the first round of the presidential election on Monday in a delaying action amid intense backroom negotiations to resolve an impasse over whom to anoint as head of state.

Of the ballots cast, 672 had no name written on them – reflecting an agreement among members of Prime Minister Mario Draghi’s fragile national unity government to avoid an outcome that could upset Italy’s delicate political equilibrium.

While Draghi, a former president of the European Central Bank, is widely viewed as a frontrunner to be Italy’s president, lawmakers fear his election as head of state could inadvertently propel the country into early elections unless parties can agree his successor as prime minister.

Political leaders are trying to hammer out an agreement on either an alternative consensus presidential candidate or on the shape of a new government if Draghi gets the job.

“We are facing a perfect storm,” said Gianluca Passarelli, a professor of political science at Rome’s Sapienza University. “If Draghi becomes president of the republic, the government may not hold. The parties are racing against time to find a person who can hold the majority together until the 2023 elections. This is the pivot of the intense negotiations of these hours. ”

The blank ballots ensured no candidate had the necessary support to win the presidency, giving parties more time to negotiate. The process will continue with a second round of voting on Tuesday.

Two senior members of parliament from opposite sides of the political spectrum told the Financial Times that the absence of a “plausible alternative” president increased the odds of Draghi eventually getting the job.

However, a center-right lawmaker said: “[This] is not without major stomach aches within the governing coalition. ”

Voting took place over five hours to maintain strict Covid-19 protocols and social distancing, with some of the electors who are suffering from the virus casting their ballots at a drive-through facility.

Outside the parliament, where votes were being counted, Andrea Marcucci, a senator from the center-left Democratic party, said: “It is not easy to find a solution.

“It is crucial to find a president who represents the entire nation but also necessary to guarantee authoritative leadership at the helm of government so we can move forward, manage emergencies and secure the EU recovery funds,” Marcucci said. 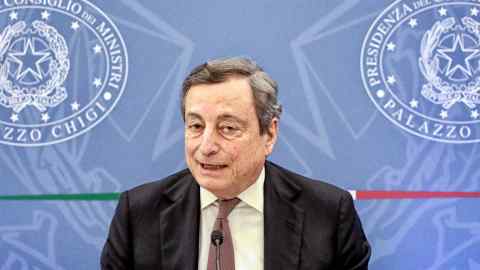 In the next two rounds of voting, a candidate will require the support of two-thirds of electors to win the presidency. But from the fourth round, likely to take place on Thursday, a candidate can win with just half the votes plus one, raising the prospect of a political bloc being able to push through its favored nominee without a broad consensus.

The election to replace incumbent Sergio Mattarella, whose term ends on February 3, comes at a turbulent time for Italy, which has just begun a program of economic and social reforms to reboot its chronically underperforming economy. The EU will provide up to € 200bn for the program, but Italy will have to adhere to strict timelines in order to receive the funds.

Left-leaning politicians and senior bureaucrats said Draghi has refused to offer reassurances on the composition of a potential future government, including any successor as prime minister, adding to the hesitation over elevating him to the presidency.

Italy’s heads of state have the power to name prime ministers, although those appointed must eventually secure the support of a parliamentary majority, and approve or veto cabinet appointments.

“Everyone wants to avoid a snap election but they also want a government with a stronger political presence. They don’t want technocrats in key posts and another one as president, ”said one senior official.