“All sanctions that impact energy will impact Italy more than any other country because we are gas-dependent, unlike France and Germany,” Draghi said, while unveiling the energy package.

“Sanctions must be effective but sustainable,” he added.

Italy will spend roughly € 6bn to help cut levies on energy bills, and try to shield the poorest households, its most energy intensive businesses and financially fragile local authorities from the full impact of the energy price surge.

The package is the latest attempt by Draghi’s government to ensure that the country’s rebound from a nearly 9 per cent, Covid-induced GDP contraction in 2020 is not derailed by surging energy bills.

Rome has already spent some € 10bn since last July on trying to hold down consumer power bills. Despite that, Italy’s energy regulator, Arera, raised electricity prices by 55 per cent, and gas prices by 42 per cent at the start of this year.

Without the government’s intervention, domestic electricity prices would have increased by 65 per cent in the first quarter of this year, energy analysts say.

Industry groups warn that the energy price shock will result in lower corporate profits and higher consumer prices, acting as a drag on the recovery. 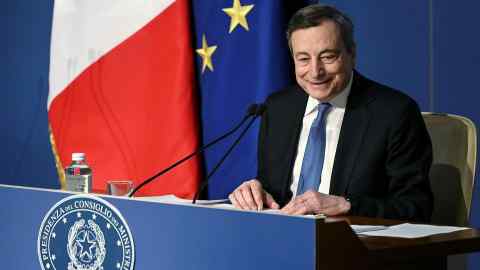 Antonio Patuelli, president of the Italian banking association, warned at a public forum this month that Italy was facing “an energy crisis the likes of which we have not had so bad since 1973”. He flagged risks of “a new recession” without more active government intervention.

Italian industries are expected to face € 37bn in energy costs in 2022, up from € 8bn in 2019, according to a publication by economists Massimo Beccarello and Ciro Rapacciuolo of the national business lobby Confindustria.

“This is an unsustainable level for Italian companies and could lead to business closures in the absence of a meaningful public intervention,” the study said.

Draghi said the package unveiled on Friday would not affect Rome’s ability to meet its planned fiscal deficit target of 5.6 per cent of GDP, nor add to public debt.

An Italian official said the government has headroom as a result of better than projected fiscal performance last year.

Italy depends on imports for nearly three-quarters of its energy needs, according to Eurostat, the statistical agency of the European Commission.