The sound of explosions rang out over Kyiv at dawn on Thursday, as the Ukrainian capital woke to start a large-scale invasion by Russia that began with missile strikes against military targets and airports across the country.

Lines of cars jammed the main roads out of the capital as residents fled, leaving the city center deserted at what on a normal day would have been rush hour. People with suitcases in hand crowded into metro trains, tried to buy medical supplies at pharmacies, and lined up at ATMs to withdraw cash.

A few people, some with children, camped out in the metro’s underground areas, huddling on the floor and checking the fast-moving news on their phones, which showed Russia bombing a string of targets across Ukraine and intense fighting in the country’s east.

“We don’t have anywhere to go,” said Anastasia Tarasiuk, 22, who had set up camp on a yoga mat in the Lukianivska metro station with her partner Oleskiy Yuhemenko, 24. The young couple had brought a backpack, a portable gas stove and a five-liter bottle of water.

“We live in a rented apartment in Kyiv, and we don’t know where we could even go because there is shooting everywhere, in the east as well as in the west,” Tarasiuk said. “We are hoping the shooting will end within five or six hours.”

They had been woken by a phone call from relatives telling them to head to shelters. Their emergency bags had already been packed the night before. “We think the subway is the most logical place to stay now,” Yuhemenko said.

At about 6.48am local time Russian tanks crossed into Ukraine from Belarus, where they have been stationed for several weeks.

“This is our land, this is Ukraine,” said Irina, queueing to withdraw money at Kyiv’s central Teatralna metro station, as people with suitcases lined up behind her. Several ATMs had already capped withdrawals.

“It is a disgrace; that man should be destroyed for what he is doing. . . he should be crushed, ”Irina said, referring to Russian President Vladimir Putin.

The shelling heard in Kyiv at dawn did not continue through the morning, and the Ministry of Defense claimed its strikes had rapidly knocked out Ukraine’s air defenses. Financial Times reporters in Kyiv heard at least one flyover by military jets later in the morning.

Kyiv’s mayor Vitali Klitschko addressed the capital’s residents on social media, asking them to stay home and head to a bomb shelter when needed. Kyiv has prepared about 5,000 locations as shelters across the city, marked out on a Google map.

“Ukraine is under attack by an aggressor. The roar of shells can be heard in Kyiv, ”Klitschko said. “The worst enemy right now is panic.” 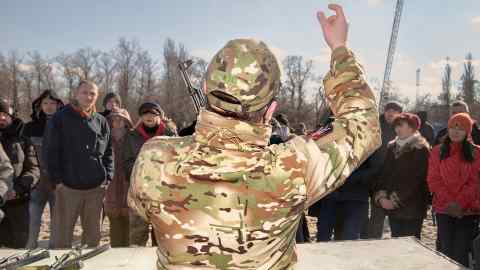 Boris Misharyn, a 30-year-old Kyiv resident who runs a small IT company, said he was trying to keep calm among his friends. He stood on the street with several large water bottles.

“We’re all frightened now, we don’t know what to expect from Putin,” he said. “Right now I can sense mass panic in Kyiv, everyone is trying to get out of the city. . . But it’s important to remain calm. “

Misharyn said he would be staying in Kyiv, in the hope that political negotiation would put an end to the conflict before it reached the city. If not, he too would head to western Ukraine.

“What I don’t understand,” Misharyn said, “is what the Russian people are fighting for. . . Why are they staying silent? ”

Revealing Ukraine’s domestic political divisions, another resident said she felt there was blame on both sides of the conflict, east and west. Regardless, Ukraine was the victim, she said.

“Putin is fighting with America, and we are ending the battleground. Us, the Donbas, Ukraine. We’re the battleground, ”said Oksana, standing in an underpass waiting for money. She declined to give her second name.