The ancient Japanese city of Kyoto is devising a tax to tackle the demographic challenges of a country where the population is declining at a rate of about 1,500 people a day and the stock of empty homes is forecast to exceed 20mn in the next two decades.

Although the problem of akiya – homes that have been abandoned due to the death of their owners and the refusal of heirs to manage them – affects all of Japan, Kyoto will be the first local government to penalize people who leave houses empty for an extended period.

Despite its concentration of temples, shrines, traditional ryokan hotels and world heritage sites that serve as a tourist magnet, Kyoto is among the most heavily indebted cities in Japan.

The tax, if successful, could become a template for other local governments. For decades, authorities have turned to address a problem that can leave once charming residential areas pockmarked with ruined, tumbledown homes that attract vermin and are often used as dumping grounds for people too lazy to follow strict recycling rules.

Kyoto’s tax plan is an effort to step in before homes become uninhabitable. Authorities said they were initially targeting 15,000 empty homes that they believed, with a tax incentive, could be rented out or renovated and sold.

Empty homes have been a years-long challenge for Japan, where 14 per cent of its housing stock, or 8.5mn units, were unoccupied in 2018, according to the Interior Ministry’s latest affairs survey.

Nomura Research Institute estimates that, in a worst-case scenario, the figure will rise to 31 per cent, or 22mn units, by 2038. Housing stock easily exceeds the increase in the number of households in the world’s third-largest economy, where the population, including a pandemic-related exodus of foreigners, fell by 630,000 people last year, according to government data.

Although the city needs permission from the internal affairs minister as well as approval from the city council this month, the tax is “expected to widen the choices of residences which are still not on the distribution market, so that we don’t leave these assets idle but deliver them to the next generation, ”said Hiroyuki Nakagami, who manages the empty home tax system. 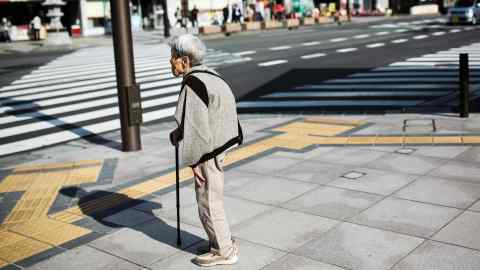 Yukihiro Sugatani from the central Kyoto district of Rokuhara said dozens of houses in the area had been left abandoned for a decade. They are banned from reconstruction because they were built on a tiny road before a building standard law enacted in 1950 and do not meet its requirement.

“They immediately turn into empty houses as the dwellers pass away. . . Their families want to keep the house vacant because they believe the occupant’s grandson or granddaughter will return in the future [from Tokyo and other big cities]. But that is an illusion. They never come back, ”he said.

Koganezuka, in the mountains south-east of Kyoto, was among many dormitory towns developed around Japan’s biggest cities during its “economic miracle” years of the 1960s and ’70s. Today, its streets are a patchwork of modest houses and rapidly decaying empty homes.

Seiichi Tamaki, who moved to the area in 1967, said he could remember being unable to drive to a nearby station because there were so many school children thronging the roads.

Now, most of the residents are approaching their 80s, said Tamaki, who is preparing to operate a minibus from April that will ferry elderly residents to the bus stop down the hill.