Britain’s leading economic think-tanks poured cold water on Rishi Sunak’s tax cutting claims, concluding on Thursday that the vast majority of working people will be paying more in taxes on their incomes under the chancellor’s policies.

On Wednesday Sunak said his Spring Statement “delivers the biggest net cut to personal taxes in over a quarter of a century”, but the Resolution Foundation and the Institute for Fiscal Studies rejected the chancellor’s claims.

Torsten Bell, chief executive of the Resolution Foundation, said Sunak’s policies of raising the national insurance threshold, cutting 5p off the duty on a liter of petrol and announcing a 1p reduction in the basic rate of income tax in 2024 “do not measure up to the rhetoric ”.

Paul Johnson, director of the IFS, said:[Sunak] continues, despite his rhetoric, to be a chancellor presiding over a very big increase in the tax burden. What he did yesterday was not even enough to stop the expected tax burden rising yet further. ”

Johnson added that income tax revenues in 2024-25 would not drop despite the 1p cut in the base rate because inflation was lowering the real value of tax allowances and thresholds.

“That’s the effect of inflation and fiscal drag,” he said. “[The Treasury has] magically doubled the scale of the tax rise he announced last year – the four-year freeze in the personal allowance and higher rate threshold. The proposed cut at the basic rate gives back only about half of the additional windfall he is now expecting to enjoy from that measure. ”

The Resolution Foundation calculated that the effects of inflation meant that seven in every eight working people would see tax increases rather than cuts.

Alongside the 1.25 percentage point increase in national insurance being imposed in April, it calculated that only people with incomes between £ 11,000 and £ 13,500 would pay less in taxes on their incomes from all measures outlined by the chancellor.

“Of the around 31mn people in work, around 27mn will pay more in income tax and NI in 2024-25 thanks to changes announced since Rishi Sunak became chancellor,” the foundation calculated. 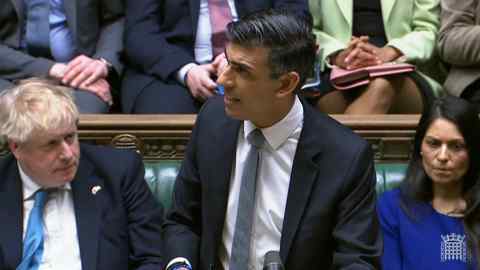 This was in stark contrast, they said, to households that are facing the largest cut in living standards since comparable records began in the 1950s.

Net incomes would fall 2 per cent across the 2019 to 2024 parliament, it estimated, making it the “worst on record for living standards”, with drops even greater than at the time of the global financial crisis.