Germany’s Lufthansa and Swiss-Italian shipping conglomerate MSC have expressed interest in acquiring a majority stake in ITA Airways, the successor to bankrupt Alitalia, as a sign of how the pandemic could change parts of the European aviation industry.

The Geneva-based MSC said on Monday that it aims to form a partnership with the Italian government, which owns all of ITA Airways, along with Lufthansa, by setting a 90-day period for exclusive talks.

MSC, the world’s largest container group, added that the deal would help it expand into air cargo, a sector that thrived during the pandemic while strengthening the network of the Frankfurt-based airline in Europe.

ITA said MSC and Lufthansa have asked the Italian government to retain a minority stake in the airline. The German carrier confirmed the partnership with the delivery group without offering further details.

The approach to the Italian government came after ITA Airways made its first flight in October, emerging from the rubble of the bankrupt 75-year-old Italian carrier Alitalia after years of losses and state-backed rescue.

Rome took control of Alitalia in 2020 after attempts to find a private buyer failed as the pandemic tore apart global aviation. ITA took over the Alitalia brand for just € 90 million, far less than the original asking price of € 290 million.

The Italian government has said the new carrier will have to be profitable by 2025, something Alitalia has failed to achieve in the 21st century.

From the outset, ITA President Alfredo Altavila said the new carrier would have to make a deal with another airline to give it the scale to compete with other major European carriers.

He told the Financial Times on Monday that the potential deal was a “very convincing solution” for ITA.

“This is a great opportunity for us to expand into the cargo business, and Lufthansa is a great solution for our passengers,” he said.

Some airline executives and analysts predict a wave of consolidation as the industry emerges from the coronavirus crisis, and the Lufthansa-ITA partnership will provide some of the clearest evidence of how carriers position themselves in the world after the pandemic. 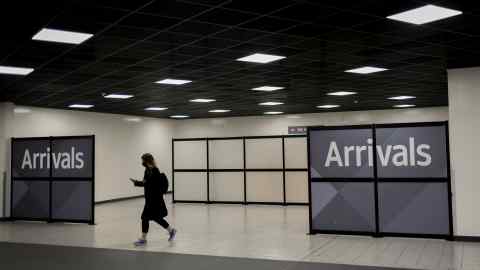 Lufthansa has grown from its origins as Germany’s national airline to a European airline conglomerate with five airlines, including Switzerland and Austria.

The group received billions in financial aid during the pandemic, but has made significant progress in restructuring and returned to profits in its last quarter.

Meanwhile, with Soren Toft, who succeeded rival Maersk before joining MSC in December 2020, the shipping group shifted its strategy from organic growth to deals, launching negotiations in December to buy the port and logistics business. of the Bolloré Group for 5.7 billion euros.

Container companies have taken advantage of incredible freight rates with profits exceeding those of large technology companies. This has led to increased investment by ocean carriers in other transport assets, including air cargo, ports and logistics providers.