The world’s largest luxury group LVMH has said it is confident it can continue its fast-paced growth after reporting fresh sales and profit records last year driven by booming demand in the US and China.

The conglomerate controlled by billionaire Bernard Arnault also increased its annual dividend to € 10 per share, its highest ever payout and two-thirds up on the previous year.

The pandemic proved a shortlived crisis for the group, whose biggest brands Louis Vuitton and Christian Dior have continued to attract affluent shoppers despite store closures and lingering travel restrictions. A gulf has opened between these top brands and smaller independent ones that have lost market share and struggled to keep up in an advertising and ecommerce arms race.

The luxury boom has made LVMH into the biggest listed company in Europe by market capitalization, and turned Arnault into the second-richest person in the world after Tesla’s Elon Musk, according to Forbes. The 72-year-old built the group into a powerhouse through decades of acquisitions. It now includes dozens of brands, from Moët champagne to Cheval Blanc high-end hotels.

It remains to be seen whether these growth rates can be maintained. Investors have fled to worry about the impact of rising interest rates and inflation on the global economy. 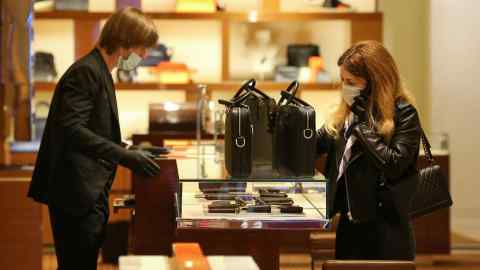 As global stock markets have dipped this year, LVMH shares fell about 6 per cent before Thursday’s results, while smaller rivals Kering were down 8 per cent and Hermes 16 per cent. Its forward price-to-earnings ratio of 28.3 is about one-quarter lower than a year ago.

Asked whether the recent chill in stock markets could damp down the demand for luxury, Arnault did not seem greatly concerned.

“January has been one of the most incredible months we’ve had, so we will see,” he said in an interview. “But it’s not because the stock market is becoming more rational that people will have less desire to buy a beautiful dress.”

The key driver was LVMH’s fashion and leather goods division, which reached annual sales of € 30.9bn last year, or 42 per cent comparable growth from 2019. Operating profit of € 12.8bn was more than double the levels achieved only three years ago. Thanks mainly to sales of high-margin wallets and handbags, the unit accounts for three-quarters of group operating profit, according to analysts.

LVMH’s fortunes depend in large part on the US and China. The pandemic scrambled Chinese buying patterns by shifting spending back to the domestic market since people could not splash out on shopping trips to Europe. But young Chinese have kept on buying despite the Communist government’s threats to crack down on conspicuous consumption.

The US has had a strong run, pushing revenue 25 per cent higher in 2021 than in 2019, to account for almost a quarter of group sales.

The group’s most recent deal was also in the US: the $ 15.8bn takeover of Tiffany aimed at strengthening LVMH in watches and jewelery, one of the few segments where it does not dominate. Since closing the deal a year ago, LVMH has parachuted in new management, launched new products, and sought to bring a glitzier vibe to the brand with an ad campaign featuring Jay Z and Beyoncé.

“Tiffany is now our biggest jewelery brand,” Arnault said. “The group’s objective. . . is to become the number one player in this sector. ”

Watches and jewelery made up only about 14 per cent of sales and 10 per cent of operating profit last year, including brands like Tiffany, Bulgari and Tag Heuer. But UBS analysts predicted the segment could become a “further source of upside” as the Tiffany turnround picks up pace.