Mariupol, Ukraine – Waving blue and yellow Ukrainian flags and singing a patriotic military song, hundreds of residents of the once largely pro-Russian city of Mariupol gathered in the central Theater Square with a defiant message for President Vladimir Putin: Russia is not welcome here.

On Tuesday, as people stopped for pictures next to a sign calling Moscow an aggressor, the possibility of an advance by Russian-backed separatists was a bitter pill to swallow.

The port city of nearly 500,000 people in the Donetsk region of eastern Ukraine has been briefly controlled by the rebels in 2014 and has seen significant waves of violence since.

“I came to show that we love Ukraine and we don’t want Russian ‘peace’ here,” said Andriy Voytsekhovskyy, 28, a painter and skater.

“I think it’s complete nonsense what Putin is doing, but Mariupol is, and has always been, a city that doesn’t give up.”

A long Monday night saw Putin recognize the independence of the so-called breakaway republics of Donetsk and Luhansk and move what he calls peacekeeping troops in. US President Joe Biden has called it the “beginning of a Russian invasion”.

Russia has since said it will support the territorial claims of its proxy states in eastern Ukraine, including to parts they do not currently control, increasing the likelihood of a major war in the near future. Putin has also asked the Duma to authorize the use of troops abroad.

Just 20km (12.4 miles) from the front line and vulnerable to attack from the Sea of ​​Azov, the strategic port city of Mariupol is among the areas most at risk from further escalation in fighting.

Yet a common refrain among locals is that the further you get from the front line, the more you see people panicking.

“Being inside a war zone, there’s a sense of myopia and a very human kind of optimism that nothing is going to happen – you look at the sun shining, people are going about their daily lives. It might create a false sense of security, ”said Peter Zalmayev, director of the Eurasia Democracy Initiative, a think-tank on post-Soviet states.

“People are used to war in Ukraine, but they’re used to it not really affecting their daily lives much. That could be about to change. ” 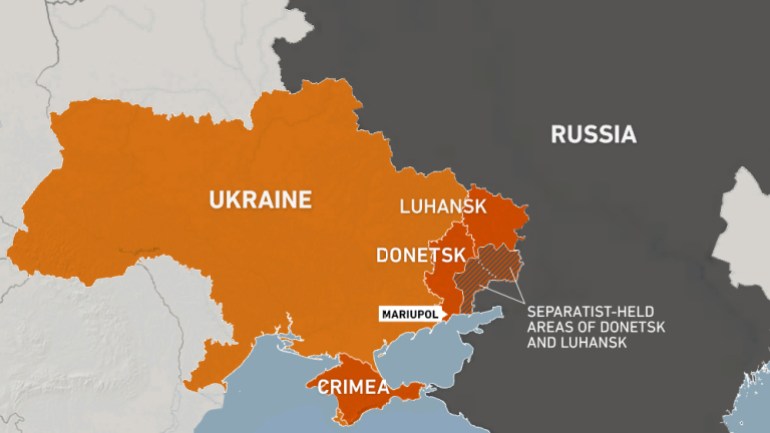 However, on Tuesday there were hints that the outer calm may be beginning to slip. In one central residential block, a woman taped handwritten directions to the walls, urging people to know where their nearest bomb shelter is.

At the protest, Andriy’s wife, Viktorii Voytsekhovskyy, who is from Russia, said she came to the streets to show her support for Ukraine’s independence.

“I am sorry that my country is so miserable. I’m ashamed, ”she said.

Eastern Ukraine is mostly Russian-speaking, with Russian state TV freely available, meaning sympathy for Moscow was once widespread. However, with poverty levels high and worsening after eight years of conflict, that sentiment has turned to indifference or even hostility in some.

“People who are thinking, waiting, hoping that it might be better when Putin comes. It won’t! ” one protester shouted to the crowd on Tuesday.

Rights groups have warned that further armed conflict in Ukraine would have devastating consequences for millions. A flurry of deadly shelling in recent days has damaged critical infrastructure in eastern Ukraine like water pumps and even a kindergarten.

Neighboring countries are preparing for millions of refugees in the worst-case scenario, while some Ukrainians are already fleeing and others have vowed to fight.

Mariupol resident Maryna Holovnova, 28, a tour guide, has been on holiday in Barcelona since last week but is not considering returning in the light of recent news.

“People are angry, and many won’t leave until Russian tanks roll into the city,” she said via WhatsApp on Tuesday afternoon.

“It seems like the country I am going back to has changed a lot in just a few days.”

Later that evening, after Russia recognized separatists’ claims to the entire Donbas region, she messaged back: “My last hope at safety has gone.”