The shares are coming off their lowest close since May 2020, and are down more than 45 percent from a September peak.

Over its life as a publicly traded company, Facebook parent Meta Platforms Inc. has repeatedly demonstrated an ability to rebound after earnings disappointments or various controversies have weighed on the stock. Not this time.

The shares are coming off their lowest close since May 2020, and are down more than 45% from a September peak, a decline that’s unmatched among big US tech stocks in recent years. The slump has pushed Meta out of the top 10 largest global companies by market value, yet also left it trading at its cheapest on record.

The stock has seen a drumbeat of bad news, including Google’s announcement this week that it would bring a privacy initiative to Android phones. While the company said the move is ad-friendly, it’s reminiscent of Apple Inc.’s changed privacy policy, which dented digital advertising and was a factor behind Meta’s catastrophic earnings report this month. The results called its growth prospects into doubt and spurred the biggest selloff in Wall Street history in terms of value erased.

“The management team needs to show investors over the next few quarters a path to growth,” said David Wagner, portfolio manager at Aptus Capital Advisors. He added that the stock, which he owns, is “in purgatory,” and that sentiment “couldn’t be lower.” 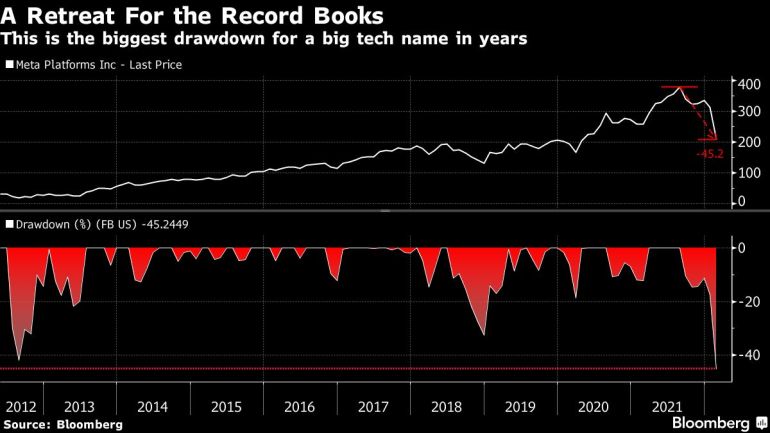 Meta’s growth woes stand in stark contrast to other technology behemoths, which reported strong results this season, helping limit declines in their stocks amid a mostly negative start to 2022.

Investors have long been quick to buy big tech on weakness, as they bet that the group will continue to see robust growth. As a result, declines of the magnitude that Meta has seen not happened in the era of trillion-dollar market caps for the companies.

Apple hasn’t had a 40% drawdown since 2013, according to data compiled by Bloomberg. For Microsoft Corp., Amazon.com Inc., or Alphabet Inc., the last time they had a peak-to-trough drop of this scale was around the financial crisis.

Meta “is the company people love to hate, and Alphabet is an easy alternative if you want exposure to online advertising,” said Bill Stone, chief investment officer at the Glenview Trust Co. “You don’t get tough questions from clients for owning Alphabet, which is doing well and not nearly so hairy as a company.”

The weakness in Meta’s stock has made it attractive in terms of traditional valuation metrics. The stock’s forward price-to-earnings ratio is under 14, its lowest on record, and well below its five-year average of 20.9. The forward price-to-sales ratio is about 4.2, also a record low. Meta is trading at its biggest-ever discount to the Nasdaq 100 Index.

In part because of the valuation, Meta continues to have fans on Wall Street. Nearly three-fourths of the analysts who cover the stock recommend buying it, according to data compiled by Bloomberg, while the average analyst price target points to upside of more than 60%.

Glenview’s Stone, who owns the stock, is among those betting on a rebound, though he admits a turnaround may be a long-term process.

“How cheap it is right now outweighs all the issues facing it,” he said in an interview. “If it can grow anywhere near where it was growing before, then it’s a steal. It will be too cheap to resist. ”

Tech Chart of the Day 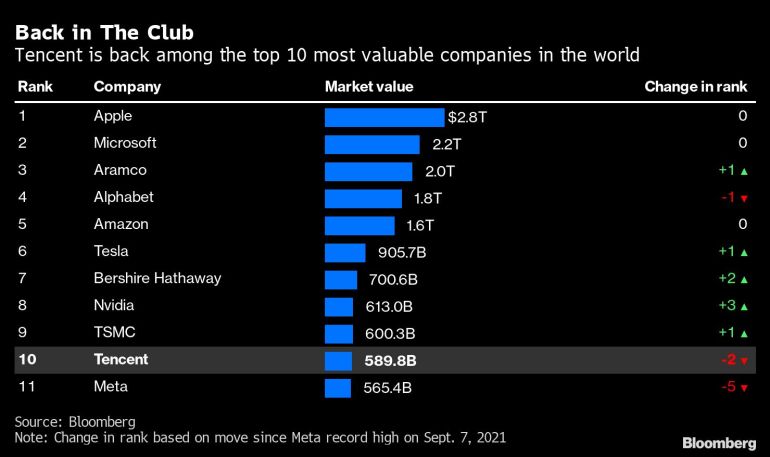 Tencent Holdings Ltd. has once again found itself among the world’s 10 largest companies by market value thanks to Meta Platforms Inc.’s tumble and a rebound in shares of the Chinese tech giant. Tencent had dropped from the list in mid-September amid Beijing’s sweeping regulatory crackdown of private enterprises. Its Hong Kong-listed shares have risen about 8% this year as receding regulatory concerns lured back investors, putting its value at about $ 590 billion.

–With assistance from Jeran Wittenstein, Thyagaraju Adinarayan and Abhishek Vishnoi.