A picture of confidence, Richard Nixon strode down the stairs of Air Force One after landing in Beijing on a brisk winter morning in February 1972 and stuck out his hand so fast it was impossible to miss the goodwill. There to greet him was Premier Zhou Enlai and an honor guard of Chinese soldiers. Nixon had arrived in what his right flank in the Republican party considered enemy territory.

There were no crowds, as there had been for the visit of Ethiopian dictator Haile Selassie, months earlier. And, beneath the cheery demeanour, Nixon was nervous, unsure. He had received no word about a meeting with Mao Zedong, the leader he had come to visit. A photo with Mao was essential for Nixon’s planned geopolitical tour force – the US and China teaming up against the Soviet Union.

When the two leaders eventually met, Mao was on his best behavior. He regaled Nixon with aphorisms and jollied him with the remark that he liked “rightists”. The encounter set in train a rapprochement that shifted the global balance of power, with Washington and Beijing on one side of the ledger and Moscow, alone, on the other.

Fifty years on, Nixon’s adventurous diplomacy is as relevant as ever. In what seems reminiscent of the old China-Soviet Union axis, Presidents Vladimir Putin and Xi Jinping are finding common causes as the Ukraine crisis heats up. They met for the 38th time last week.

The world is again being carved into competing blocs. How they align or balance against each other will define the century. But it is China in the driving seat at the moment. A nod from America is no longer required, or desired.

I beat Richard Nixon to China by five years. A group of 50 Australian university students of mixed ideological backgrounds – and some, like myself, with none in particular – arrived in early 1967. The Cultural Revolution, which we later learned claimed millions of lives, was in full throttle. We saw Mao at his worst.

Massive demonstrations denouncing “running dogs of capitalism” filled the streets of the cities. Factories were idle, the countryside in upheaval. Mao’s foreign minister, Chen Yi, with apparently nothing better to do, met us in the Great Hall of the People and tried to humor us with interpretations of Mao’s “thought”. Later, Mao cruelly demoted him.

On our last day in China before crossing the border back into Hong Kong, several of us snuck into a crowded stadium in Canton, now the powerhouse city of Guangzhou. Two men and a woman in their sixties, who were described to us as bourgeois “revisionists”, stood on a podium, their heads bowed. Thousands of people yelled slogans and several excited Red Guards harangued them. They were then escorted out a side door and taken off for what we knew must have been a terrible fate.

That taste of China implanted in my head its size, importance and the power of the Communist party to mobilize people. I sensed there was no way China was going to stay in a Mao-induced impoverished, chaotic condition. From that experience, I also saw the origins of the propaganda machine Xi harnesses daily to stoke brittle nationalism and stir the anti-Americanism that taunts the US as a nation in decay.

I returned to Beijing half a dozen times before Secretary of State Colin Powell visited in the weeks before 9/11. It was his first time there in nearly two decades. During a news conference, he told reporters about his astonishment at the new buildings and crowded Beijing skyline. I can remember thinking as I listened: why is he so surprised? China has been like this for a while.

After China joined the World Trade Organization in 2001, the new confidence surged across Asia. You could feel the wellspring of China’s clout everywhere. Conferences of sleepy regional groups – the Association of Southeast Asian Nations, for example – suddenly became showcases for China’s most senior leaders. They turned up, sometimes the Americans didn’t.

I arrived in Beijing in 2012 as a New York Times correspondent at the moment Xi assumed the leadership of China. I already had clues about how he would be received in Washington. I had attended a state department lunch in honor of Xi when he was in the last days of his vice-presidency. The formal dining room on the seventh floor was packed with America’s pre-eminent China hands. They were exuberant, almost giddy, about the economic relationship. It would be a while before reality set in.

Once I settled in Beijing, I looked for one of the interpreters who had accompanied us on our student trip in the 1960s. Back then, Mr Li – I will call him only by his last name to save any repercussions from the Chinese authorities – had been helpful in explaining the intricacies of the Cultural Revolution. Always neatly dressed in a Mao-style suit of blue cotton, he was a gifted English speaker.

Now in his early eighties, Mr Li came to my apartment with his wife one afternoon. They brought a beautiful gift, a miniature ceramic tea set. As they were leaving, Mr Li told me that when he served as our interpreter he had been a member of military intelligence.

I saw him a couple of times after that but then he no longer answered my calls. I suspect that as Xi started his purge of the military, and as China’s supercharged surveillance system gathered steam, he could not afford the risk of a connection with a New York Times reporter.

I had another relationship going back to that first trip. Chen Xiaolu – the son of Chen Yi, the foreign minister – became an occasional lunch companion. We ate at his favorite Italian restaurant in one of the big western hotels. I had written about Xi’s major programs designed to compete with the US: the Belt and Road Initiative, and the Asian Infrastructure and Investment Bank. Washington had failed to deter some of its Asian allies from joining the bank, a mis-step that was duly noted in Beijing.

Chen warned me: Xi is confident in China’s ambitions, Barack Obama should watch out. Xi believes America is a nation in decline, he’s going to take advantage every way he can. Chen, who later died from a heart attack which friends said was brought on by a clash with Xi’s apparatchiks, was right.

As I was leaving China in the autumn of 2019, a friendly government official invited me to lunch. I looked forward to a warm farewell. Instead, I received a lecture on the perfidies of the US. The protests were under way in Hong Kong. My lunch partner told me Washington was to blame and, in particular, Allen Weinstein. Fortunately, I knew of Weinstein. “He’s dead,” I replied. He had died four years earlier. “It doesn’t matter. He was the head of the National Endowment for Democracy. ”

The inference was that the endowment was behind the demonstrations. I did a little research and found the endowment had spent just under $ 640,000 in Hong Kong that year, a modest figure for an organization its size. I knew after that lunch the relationship had changed irrevocably.

Nixon, the architect of the opening to China, and Henry Kissinger, the organizer, had worked hard for three years to bring about the meeting with Mao. In Islamabad in July 1971, Kissinger went along with the indignity of being squashed into a 1960s VW Beetle belonging to the son of Pakistan’s foreign secretary, Sultan Mohammad Khan, for the drive to the airport for the flight to Beijing. It was imperative his trip be kept secret so as not to inflame the rightwing doubters in his party.

Nixon stayed in China for a seven-day televised spectacular brought live into American living rooms. America’s network news anchors trailed Nixon to the Great Wall, to banquets where he spoke glowingly of the new rapprochement, to a lake in Hangzhou where he fed goldfish. When he got home, his ratings in the polls had soared by seven points. Ronald Reagan, then governor of California, joked that Nixon’s trip should be a pilot for a television series.

After his resignation in disgrace, Nixon kept a constant interest in China. He visited Mao before he died in 1976. But he had few illusions that China would become democratic: that goal was for sentimentalists. And he intuited that his achievement in prying China away from the Soviets could eventually end up to America’s disadvantages. He could see that China would catch up with the US militarily and economically.

His biographer, Richard Reeves, recalled that Nixon believed there would eventually be a conflict between the US and China, and in that situation, the outlook for the US was grim.

“It might be a shooting war. It might be an economic war, ”Reeves told an audience at the John F Kennedy Library in Boston in 2006. But their interests were fundamentally different over the long term. And, eventually, they would clash. ” It was up to his successors, Nixon believed, and the job of the leaders of the west to prevent that from happening, or prevent that for as long as possible, Reeves said. “The east would win that confrontation,” was Nixon’s assessment.

Now the hardliners in Washington say Nixon was misguided. They argue the relationship with China helped its economy too much, and hurt America’s. The Communist party could not have survived into the 21st century, they insist, if the US had not backed China’s integration into the international system. They are dismissive of the joint intelligence relationship aimed against the Soviet Union that unfolded after Nixon left office. 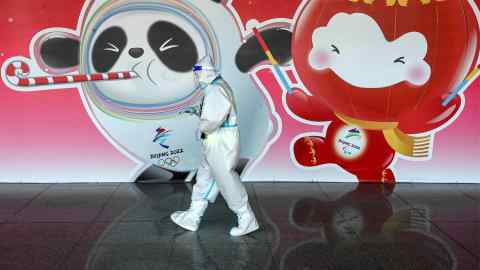 It’s the lack of diplomacy today we need to worry about. There’s no hint of talks between Washington and Beijing, or attempts to find a path on critical issues, including China’s increasing nuclear arsenal. “China is a full-service competitor,” says Charles Kupchan of Georgetown University. “Look at the indicators – AI, quantum computing. They have 1.4bn people and a market growing by leaps and bounds. . . I understand Biden saying: ‘We’re going to dig in, we’re going to compete.’ I would like to see the other side of the coin. ”

Xi and Biden have known each other for more than a decade. Will either be able to work up the nerve of Nixon? It was one minute to midnight with the Soviets when Nixon went to China. Will Xi or Biden rise to the new reality 50 years later?

Jane Perlez’s documentary podcastThe Great Wager: How Nixon and Kissinger Made Friends with China and How It’s All Unraveling ‘launches on NPR’s’ Here and Now’ on February 18