Oil prices jumped above $ 114 a barrel and global shares tumbled as major cities in Ukraine endured relentless missile bombardment from Russia and a fire broke out at Europe’s largest nuclear plant.

In Chicago, wheat futures closed up almost 22 per cent at a fresh 14-year high of $ 12.89 a bushel, while in Asia on Friday, Chinese wheat prices jumped about 6 per cent to a record high of Rmb3,595 a metric tonne.

Global commodity prices are on track for the biggest weekly rally in more than five decades as the Russian invasion of Ukraine spurs sharp gains for grains, metals and energy prices worldwide.

On Friday, analysts at Moody’s warned rising commodity prices would “tighten financial conditions and weaken growth” for major importers, with the brunt of the impact falling on countries including China, Japan and India.

Wall Street closed lower on Thursday, with the tech-focused Nasdaq falling 1.6 per cent and the broader S&P 500 off 0.5 per cent as concerns over higher commodity costs rattled investors.

In equity markets on Friday, Asia-Pacific shares sold off as the war in Ukraine escalated. Hong Kong’s Hang Seng index led the region lower with a fall of 2.5 per cent, followed by a 2 per cent drop for Japan’s benchmark Topix. China’s CSI 300 index of Shanghai- and Shenzhen-listed stocks fell more than 1 per cent.

Investors dumping riskier assets piled into sovereign debt, pushing down bond yields. The yield on the 10-year US Treasury fell 0.5 percentage points to 1.7796 per cent. 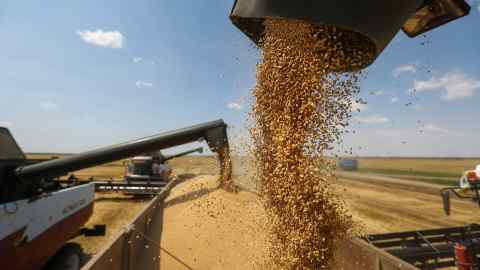 The share price falls in Asia came as Russia bombed the Ukrainian cities of Mariupol, Chernihiv and Kharkiv and Russian President Vladimir Putin pledged the war will be won “whatever happens”.

A fire that broke out at the Zaporizhzhya nuclear power plant, the largest in Europe, has since been contained, according to the State Emergency Service of Ukraine.

Ukraine’s foreign minister claimed Russia was attacking “all sides” of the nuclear power plant. Russia said earlier that its troops had taken control of the territory around the plant. Claims by the Ukrainian and Russian militaries cannot be independently verified.

As the impact of the war and sanctions on Russia reverberate through global markets, investors have also been deliberating on whether central banks in the US and Europe might walk back earlier plans to raise rates.

Futures markets pointed to further losses for European stocks, with Euro Stoxx 50 futures down 2 per cent and the FTSE 100 set to shed 1.2 per cent. The S&P 500 was tipped to fall 0.4 per cent.