Around 20,000 people in the UK signed up on Monday to offer homes to refugees fleeing Ukraine, in what a government insider described as the “generous-hearted response of the British public” to the launch of the government’s Homes for Ukraine program.

The Whitehall figure revealed the figure hours after opposition MPs had criticized the lack of urgency in the government’s efforts to help people fleeing Ukraine and raised questions over the scope of the program and its rules.

The Homes for Ukraine program forms the first phase of the second leg of the government’s program to allow people fleeing Russia’s invasion of Ukraine to come to the UK. It previously launched a family reunion program allowing anyone permanently settled in the UK to bring Ukrainian members of their extended family.

The new scheme allows people to offer a space in their homes to named Ukrainian individuals. Hosts will receive a £ 350-a-month payment while hosting people.

Michael Gove, the level-up secretary, told the House of Commons that the UK had a “long and proud history of helping others in their hour of need”.

“Our new Homes for Ukraine scheme offers a lifeline to those who have been forced to flee,” he said. “I’m asking people across our country who can provide a home for Ukrainians to consider being sponsors.”

The program’s website crashed and was unavailable to take registrations under the weight of inquiries at one point on Monday evening.

The government’s response to the Ukrainian refugee crisis has received heavy criticism from opposition parties and charities. Many have contrasted the UK’s continued insistence that Ukrainians coming to the UK should first obtain visas with the more generous approach of EU member states, which have all waived visa requirements.

Poland alone has taken in 1.72mn of the 2.81mn Ukrainians who have fled. The latest figures from the UK said it had granted 4,000 visas under the family reunion scheme by Sunday afternoon.

Lisa Nandy, shadow leveling-up secretary, told the Commons she was “deeply concerned” by the “lack of urgency” around the scheme. She expressed skepticism that the first Ukrainians could be arriving in the UK within a week under the Homes for Refugees program. The visa applications were 50-pages long and many of those fleeing Ukraine would lack the supporting documents demanded, she pointed out.

Nandy also questioned why sponsors had to give the name of an individual they hoped to sponsor. 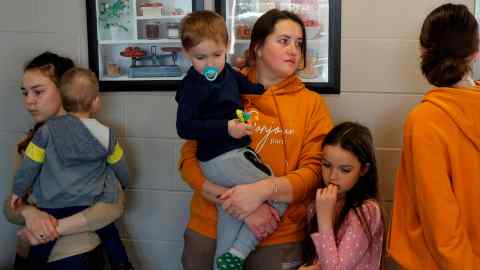 “He can’t seriously be asking Ukrainian families who are fleeing Vladimir Putin to get on Instagram and advertise themselves in the hope someone might sponsor them,” she said of Gove.

In a heated moment during parliamentary exchanges, Gove said he had “had it up to here” with accusations that the UK was not generous towards people fleeing conflict.

The initial program is open only to individual sponsors. Gove said nothing on Monday about when later phases, due to be open to charity and business sponsors, would start.

Chetal Patel, an immigration solicitor for Bates Wells who has been working to provide advice to Ukrainians seeking to reach the UK, said the number of applications showed the public wanted to help and support Ukrainians in any way they could.

“It will be interesting to see over the coming days and weeks, how quickly matches are made and the overall success rate of the scheme,” she said.

It was “welcome news” the scheme was now open, she added.

But she went on: “We still need to move quicker and the bureaucracy needs to be dropped.”