The Academy Awards, also known as the Oscars, is a ceremony where the Academy of Motion Picture Arts and Sciences (AMPAS) hands out awards for creative and technical excellence in the film industry.

What is an Oscar award and who is nominated for the Oscar 2022?

The Academy Award of Merit, nicknamed the Oscar award, is a golden statuette given to reward high achievement in a specific category, including, acting, directing, editing, score, and costume design, among others.

The nominees for this year’s Academy Awards are here.

Netflix’s The Power of the Dog leads the way with 12 nominations, including nominations for best picture, best director and several acting awards. 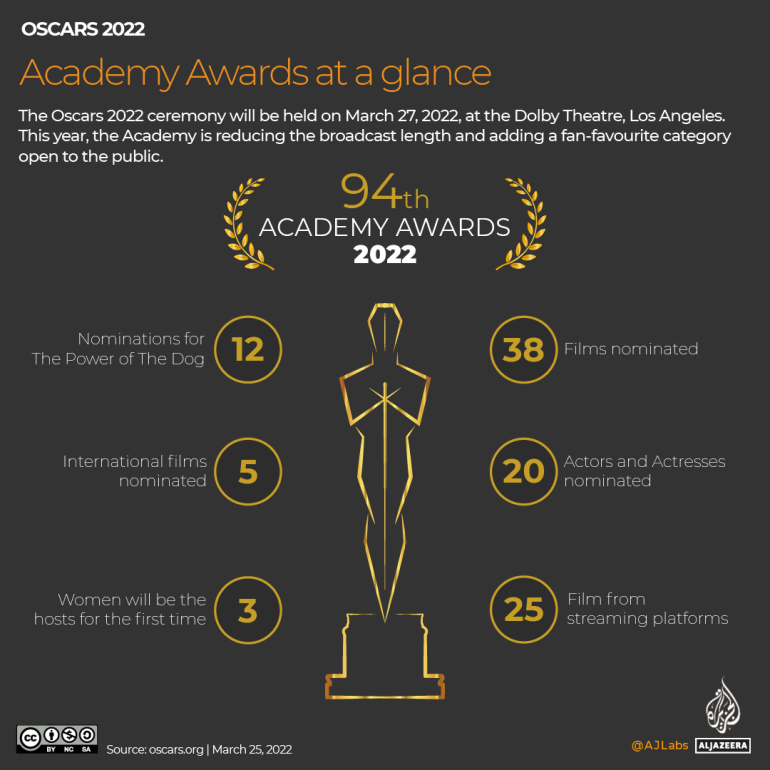 When and where are the Oscars 2022 held?

The ceremony will take place at the Dolby Theater, located in Los Angeles, United States.

The presenters for this year’s ceremony are actresses Regina Hall, Amy Schumer and Wanda Sykes. While Hall is known for her ability to perform comic roles in movies, Schumer and Sykes are stand-up comedians in addition to being actresses. This is the first time in the history of Oscars that three women are hosting the show.

The Oscars has not had a host since Jimmy Kimmel in 2018.

The 2021 ceremony had an all-time low viewership with fewer than 10 million people tuning in to watch the awards ceremony. This year, the Academy is aiming to regain its lost viewership and increase its ratings.

Are there any controversies about the Oscars this year?

In another effort to keep viewers watching longer, the Academy decided to shorten the live segment by cutting eight categories out of this year’s televised program, sparking controversy. The Academy tried to cut four categories out of the 2019 Oscars but had to reverse its decision after a severe backlash.

My heart breaks for the documentarians, editors, makeup artists, hairstylists, composers, production designers, animators, sound editors and overall filmmakers who won’t get the same chance to enjoy their moment like other Oscar winners. Please change this and # PresentAll23

The eight categories, namely documentary short subject, film editing, makeup and hairstyling, original score, production design, animated short film, live-action short film, and sound, are instead going to be held an hour earlier and the winner’s acceptance speeches will be edited into the live broadcast later. 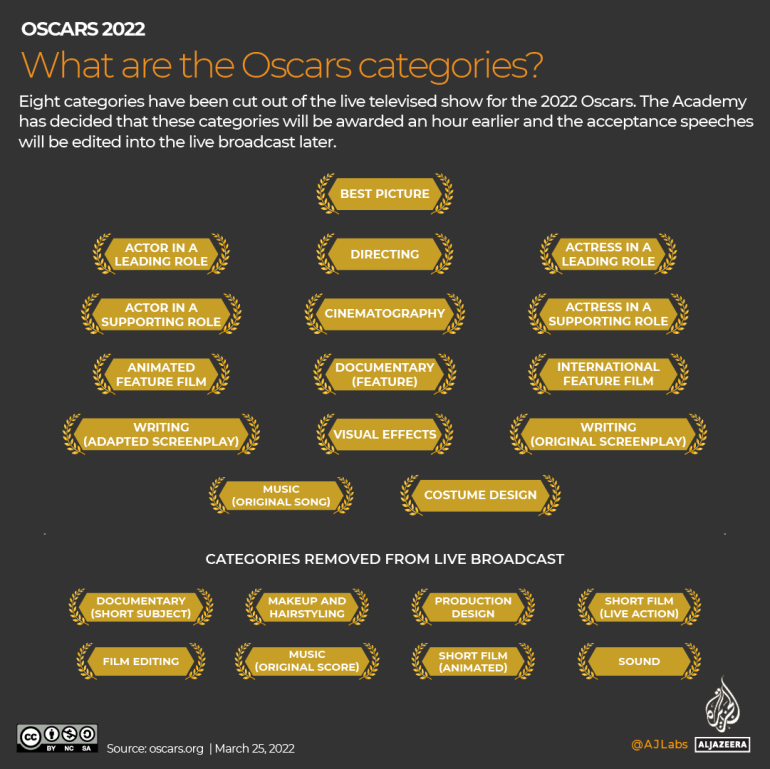 Another event that caused public backlash was the fact that Rachel Zegler, the co-lead of West Side Story, was not invited to the ceremony – even though the film she worked on was nominated seven times.

@TheAcademy as a voting member and the original Riff, let me say: it’s your duty to find Rachel a seat at the Oscars. she STARS in #Westsidestory which is nominated across the board. When they say representation matters, this is what that means. Please do right by her. https://t.co/X23XyOZo26

Later, the Academy reversed its decision and Zegler received an invitation to present at the Oscars.

“I’m so excited to open that shiny envelope,” the actress said on Twitter. “I could not be more grateful to everyone who helped make this possible. seriously. Now, what to wear… ”

What are the new categories added for Oscars 2022?

The fan favorite film category, open to the public for voting, has been added to the Oscars this year.

People can also share their “fan favorite” and their “most cheer-worthy movie moment” by using the hashtags #OscarsFanFavorite and #OscarsCheerMoment on Twitter.