French spirits maker Pernod Ricard has asked top executives from its Hong Kong office to temporarily relocate outside the city as the Asian financial hub becomes increasingly closed off from the world and Beijing prepares to take a greater role in its pandemic response.

Pernod Ricard’s move comes as global businesses review the operational risk of staying in Hong Kong, which has imposed its most restrictive anti-virus measures yet as it battles an escalating wave of Omicron cases.

The company’s senior staff based in Hong Kong have been asked by management to work elsewhere in order to continue to serve the Asian markets they operate in and be able to visit its Paris headquarters, two people with knowledge of the request told the Financial Times.

“All senior management were asked to relocate temporarily. . .[late]last year, ”one person said, adding that the flight bans and further restrictions on social distancing introduced in the city after Omicron cases started rising in December added urgency to the request.

Dubai was being considered as one temporary solution. “You need to travel to look after clients. When the rest of the world is opening up, it’s becoming difficult to justify [being based in Hong Kong]”He said.

Last week, the FT reported that the Mandarin Oriental hotel group had also asked top executives to work outside Hong Kong because of the pandemic restrictions.

The city announced over the weekend that joint task forces would be set up with mainland Chinese authorities to manage the outbreak, a signal that more stringent measures may be on their way.

China has championed its zero-Covid strategy as superior to the West’s approach and has argued it is the best way to protect both the health and economic wellbeing of Hong Kong.

But while it has spared Hong Kong a greater toll of Covid deaths, with just 219 recorded during the pandemic, the policy has also stranded the financial and aviation hub. Beijing has yet to allow free travel between the city and the mainland, undermining Hong Kong’s role as a commercial conduit to China.

The restrictions have also stifled international travel to Hong Kong. Last week, the city’s government extended a flight ban applicable to nine countries, including the US and the UK. 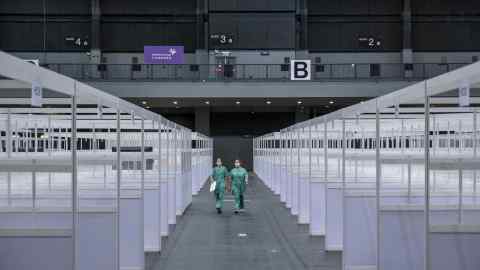 The ban has stranded executives outside the city and precluded visits from company heads. Incoming international travelers are subject to a hotel quarantine.

International chambers of commerce have warned of staff retention problems, which have compounded an emigration wave from Hong Kong in the wake of 2019’s political unrest and subsequent crackdown by Beijing on freedom of expression.

“It might take three years to get back to normal and many people are not prepared to wait that long. It seems a bit like a tipping point, that’s my impression, ”Ehmann said.

Pernod Ricard employs 18,500 worldwide and only finished remodeling its Hong Kong office in 2020. The company’s China segment recorded 14 per cent growth in the second half of last year, with Asia and emerging markets accounting for 42 per cent of the group’s sales.