Poland has become the latest country to send arms to help Ukraine fend off a potential full-scale Russian invasion as Kyiv said it planned a big increase in the size of its armed forces.

Mateusz Morawiecki, Poland’s prime minister, announced the shipments to Ukraine during a visit to Kyiv on Tuesday. “We are ready to give Ukraine tens of thousands in artillery and ammunition rounds, but also surface-to-air weapons of the Grom class and light mortar systems, as well as drones,” Morawiecki said.

“Our part of Europe does not suffer from earthquakes and volcano explosions, but despite this, living close to a neighbor like Russia, we have the feeling that we live near a volcano,” he added.

His announcement formed part of a display of solidarity with Kyiv by European allies, coming on a day UK Prime Minister Boris Johnson is also due to meet Ukraine’s President Volodymyr Zelensky in the country’s capital.

Speaking to ministers ahead of his trip, Johnson told his cabinet that the situation was “deeply concerning and that there were no indications of Russia de-escalating with more than 100,000 troops currently amassed on Ukraine’s border”.

Antony Blinken, US Secretary of State, and Sergei Lavrov, Russia’s foreign minister, are also due to speak by phone on Tuesday, their first conversation since the US sent a written response to Russia’s security demands last week.

Russia sent its own reply to the US response on the eve of the Blinken-Lavrov call as an estimated 100,000 Russian forces are massed near the country’s frontier with Ukraine.

Morawiecki spoke during a briefing with Denys Shmyhal, his Ukrainian counterpart, and before the arrival later on Tuesday of Johnson and also Mark Rutte, the prime minister of the Netherlands.

Shmyhal said his country hoped “to be able to officially start a new format of regional co-operation between Ukraine, Poland and Great Britain under the conditions of continuing Russian aggression”.

“We need to sign a three-party document on co-operation and strengthening regional security,” he said without providing further details.

In a Facebook post on Tuesday, Ukraine’s foreign minister Dmytro Kuleba suggested the trilateral new “format” between Ukraine, the UK and Poland would help bolster Ukraine’s defenses and security.

“We cannot expect security and prosperity somewhere in the future when we become members of the EU and NATO. We need them today, ”Kuleba said.

The Polish arms shipment comes after the UK last month provided Ukraine with thousands of NLAW anti-tank busters and other equipment. The US last year provided a record $ 650mn in military assistance to Ukraine, on top of $ 2.7bn it has supplied since the war in Ukraine’s east erupted in 2014.

Zelensky also said on Tuesday that the country would add 100,000 professional troops to the country’s 261,000-strong armed forces, and boost army salaries in order to deter further Russian aggression. The increase in troop numbers is planned over three years. 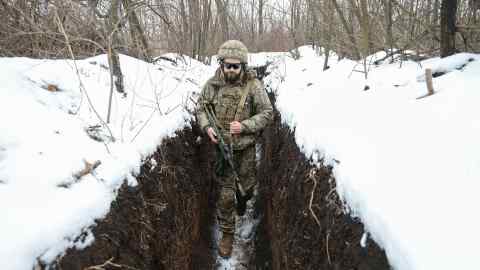 Zelensky signed the relevant presidential decree on Tuesday, telling parliament he was doing so “not because war is coming, but so that there will be peace”.

“This decree provides for an increase in the financial security of all military personnel to a level not lower than three minimum wages,” Zelensky added. Ukraine’s minimum wage equates to roughly $ 230 per month.

The US and Ukraine’s other western backers fear Russia’s troop build-up could be preparation for a Russian invasion or deeper incursions on top of Moscow’s 2014 annexation of Crimea and the fomenting of a proxy separatist war in the eastern regions of the country.