The leaders of some Canadian provinces pushed back against Prime Minister Justin Trudeau’s decision to invoke emergency powers as anti-vaccine mandate protests continue to grip the nation’s capital.

Trudeau said he would invoke the Emergencies Act, which would allow the federal government to ban public assembly and travel. It comes after a weeklong blockade at the Ambassador Bridge – an important trade route that links Windsor, Ontario, with Detroit, Michigan – was brought to an end on Sunday.

The premiers of Quebec, Alberta, Saskatchewan and Manitoba voiced opposition to Trudeau’s proposal ahead of his address to the nation later on Monday.

“I was very clear: we do not want a federal state of emergency in the territory of Quebec,” said Prime Minister François Legault.

“Now is not the time to put oil on the fire,” Legault added. “I can understand that after more than two weeks, the federal government and the Ontario government want to put an end to this blockade, which has nearly become a siege. But we don’t have these problems in Quebec. “

“We would prefer that the Emergencies Act not be invoked, but if it is we would very much prefer that it not be applied to Alberta,” Kenney said during a press conference.

Saskatchewan’s Scott Moe also said “if the federal government does proceed with this measure, I would hope it would only be invoked in the provinces that request it.”

The Emergencies Act has never been used before. Its predecessor, the War Measures Act, was used only once during peacetime by Trudeau’s father, Pierre Elliot Trudeau, to quell a violent revolt by Quebec separatists in 1970.

“Freedom Convoy” protests have spread across Canada in recent weeks, from Ottawa to the Ambassador Bridge and another border crossing in Coutts, Alberta, peeling pressure on Trudeau, the Liberal prime minister.

The protest at the Windsor-Detroit bridge rippled across the automotive industry, forcing General Motors, Ford and Toyota to scale back production last week as it faced a shortening of parts stemming from the logjam.

Meanwhile, several regions in Canada have rolled back pandemic-era curbs, following a decline in reported Covid-19 infections, which had surged amid the spread of the Omicron coronavirus variant.

Ontario became the latest to do so, announcing on Monday that it will end its requirement that people show proof of Covid-19 inoculation at public venues starting on March 1.

“Like all of you, I’ve waited a long time for this news, but please never doubt that the steps we took together, as difficult as they were, were absolutely necessary and saved tens of thousands of lives,” Ford said.

Addressing the protesters who have occupied the Ottawa capital for 18 days, Ford said: “It’s unacceptable that they have a million people held hostage right now and again. . . we won’t tolerate it. “

“My message to the protesters, occupiers, it has to come to an end,” he said, adding they would “lose your [commercial] license for life, lose your car indefinitely, we’re going to throw every tool we’ve got at you ”.

Police cleared the last protesters from the Ambassador Bridge on Sunday, after a judge ordered an end to the blockade and Ford threatened hefty fines and a year in jail for anyone blocking access to roads and bridges. 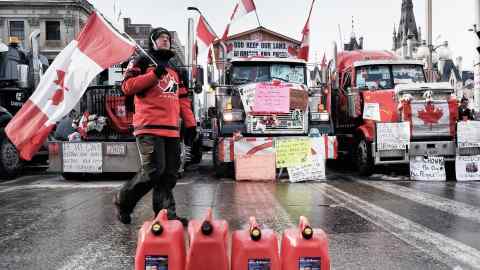 Matt Moroun, chair of the Detroit International Bridge Company that owns the bridge, cheered its reopening and called on authorities to develop a plan that would “protect and secure all border crossings in the Canada-US corridor and ensure that this kind of disruption to critical infrastructure will never happen again ”.

While GM said its production had returned to normal, all three lines at Toyota’s plants in Canada remained shut on Monday, and only some lines are running at three of its US factors that were hit by shortages.

“We expect related disruptions to continue this week, and we’ll make adjustments as needed,” Toyota said in a statement.