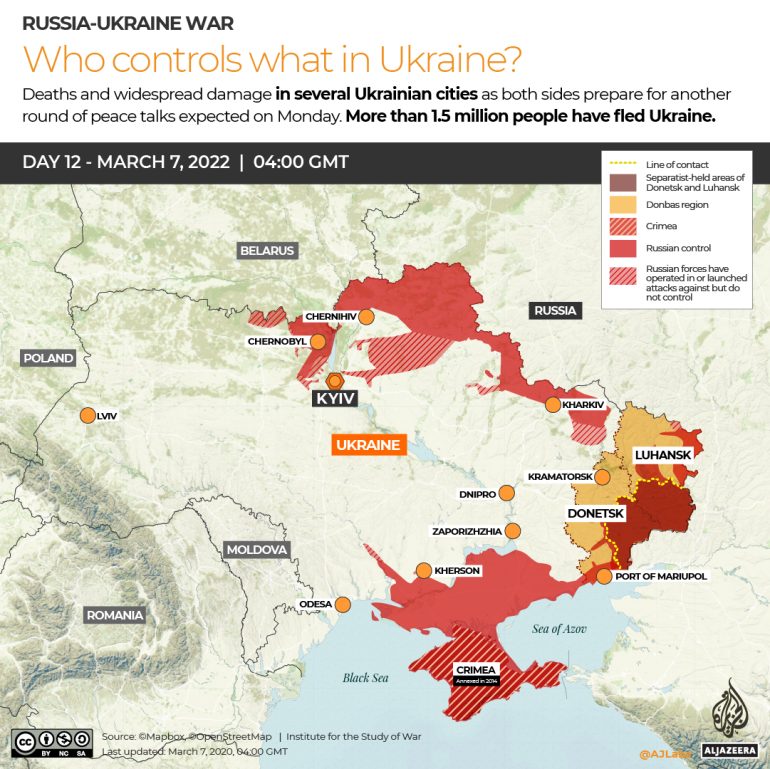 Czech President Milos Zeman, long sympathetic to Moscow, has said he would award the highest state honors to Ukraine’s President Volodymyr Zelenskyy for his bravery and courage in the face of Russia’s invasion.

Zeman showed support for Ukraine and its people as “war raged”, calling the war one provoked by Russian aggression.

He said one parliamentary deputy had proposed awarding Zelenskyy the highest Czech honors. “And I decided to comply with this proposal,” Zeman said.

“This is because the Ukrainian president has shown courage and bravery, and although the United States offered him an evacuation, he stayed in the capital of his country, from where he is leading his defense.”

Ukrainian President Volodymyr Zelenskyy has accused the Russian army of scuppering the evacuation of civilians through humanitarian corridors agreed after talks with Moscow.

“There was an agreement on humanitarian corridors. Did that work? Russian tanks worked in its place, Russian Grads [multiple rocket launchers]Russian mines, ”Zelensky said in a video posted on Telegram.

Portugal’s central bank has said it had instructed lenders to freeze the accounts of people and entities targeted by sanctions against Russia.

The Bank of Portugal, led by former Finance Minister Mario Centeno, said it had initially identified a “very small number” of sanctioned people and entities with Portuguese bank accounts but said assessment efforts were ongoing.

In a statement, the central bank said lenders were told to start freezing bank accounts on February 25 and should continue to monitor the list of sanctioned people and entities so they can quickly act when and if new names are added.

Civilians stuck in areas of active hosts in Ukraine should be allowed safe passage in any direction they choose, United Nations aid chief Martin Griffiths has said during a UN Security Council meeting.

“The parties must take constant care to spare civilians and civilian homes and infrastructure in their military operations,” Griffiths said. “This includes allowing safe passage for civilians to leave areas of active hostilities on a voluntary basis, in the direction they choose.”

War not going as Russia planned: UK ambassador to US

Karen Pierce, the UK ambassador to the US, has suggested that the invasion of Ukraine is not going as planned for Russia, saying Moscow has been met with transatlantic unity and Ukrainian resistance.

“If I sat in Moscow and I were an adviser to President Putin, I would be interested in the fact that because of this invasion of Ukraine, more and more countries want a relationship with NATO. NATO members have been brought closer together, ”Pierce told Al Jazeera in an interview.

“So if I sat in the Kremlin, I don’t know from a Russian perspective that this is turning out the way they want. And in addition, their forces are not doing as well as they had planned in Ukraine itself. ”

Putin says Russia will not send conscripts to Ukraine

Russian President Vladimir Putin has said he will not send conscripts or reservists to fight in Ukraine and that “professionals” fulfilling “fixed objectives” were leading the war.

“Conscripted soldiers are not participating and will not participate in the fighting. There will not be an additional conscription of reservists either, ”Putin said in a televised address. “The fixed objectives are only carried out by professional services.”

US envoy to UN calls on Russia to guarantee humanitarian access

The US ambassador to the United Nations, Linda-Thomas Greenfield, has called for a pause in hostilities to allow safe passage of civilians who wish to leave conflict areas in Ukraine.

Speaking to the UN Security Council, Thomas-Greenfield called for a “firm, clear, public and unequivocal commitment” to allow and facilitate immediate, unhindered humanitarian access for humanitarian partners in Ukraine.

She added that the Biden administration was “outraged” by reports of Russian attacks harming civilians.

No major Russian progress in north and northeast Ukraine: Pentagon

The United States does not believe Russian forces have made major progress in the north and northeast of Ukraine in the last few days, the Pentagon said.

Pentagon spokesman John Kirby said Russian troops had taken the city of Kherson and were attempting to encircle Mariupol, but were not in control of it.

Read all the updates from Monday, March 7, here.