Top Republican senators have launched an eleventh-hour effort to block the confirmation of Sarah Bloom Raskin to the top regulatory role at the Federal Reserve, opting to boycott a planned vote on Tuesday.

The Senate banking committee was set to rule on Raskin, a Democrat who previously served as deputy secretary of the US Treasury, alongside four other nominees for leadership roles at the central bank.

Alongside Raskin, he nominated Lisa Cook, a professor of economics and international relations at Michigan State University, and Philip Jefferson, a professor at Davidson College, to fill the remaining governor seats.

Republicans effectively held up Tuesday’s vote, opting not to provide the quorum necessary to advance the confirmation process, which will eventually culminate in a Senate vote.

“Until basic questions have been adequately addressed, I do not think the committee should proceed with a vote on Ms Raskin,” Pat Toomey, the top Republican ranking on the banking committee, said in a statement on Tuesday.

In a statement released soon after, Sherrod Brown, a Democrat from Ohio and chair of the banking committee, criticized Toomey for choosing to “abdicate his duty to the American people and put our economic recovery at risk”.

“If my colleagues are as concerned about inflation as they claim to be, they will end the theatrics and show up today to do their jobs for the American people,” he said in a statement.

Toomey and other Republicans have raised concerns about Raskin’s past advocacy for proactively addressing climate-related financial risks. More recently, their criticism has centered on her former role as a board member for the Reserve Trust, a company that during her tenure secured a “master account” with the Fed that gave it direct access to the central bank’s payment systems.

Raskin, who has denied any wrongdoing, previously served as a Fed governor before moving to the Treasury.

Mitch McConnell, the Senate’s top Republican, backed his colleagues on Tuesday, using a lengthy speech on the Senate floor to take issue with Biden’s nomination of both Cook and Raskin.

McConnell said Cook had “previously promoted partisan conspiracy theories” and pointed to a 2020 case in which she allegedly called for another academic to be fired over their opposition to defunding the police.

But the Republican Senate minority leader said Raskin’s nomination was “more troubling still”, saying the former deputy Treasury secretary “has spent recent years pressing the Fed to stop being a neutral regulator and instead become an ideological leftwing activist body” and raising questions about her credentials, including her affiliations with a Colorado-based technology group. 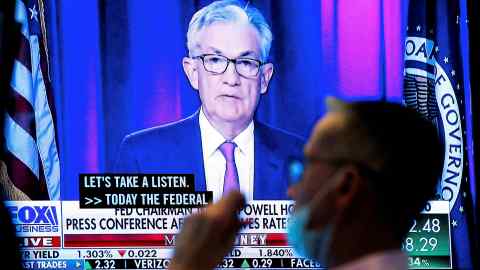 McConnell also told lawmakers he would meet Powell later on Tuesday. He praised the Fed chair as a “straight-shooter within the mainstream of monetary policy”.

Bill Hagerty, the Republican senator from Tennessee who sits on the banking committee, also voiced his support for Toomey’s actions, saying Raskin’s radical views to choke off capital to the oil-and-gas industry are damning enough, but her lack of transparency requires additional scrutiny. . . not a vote ”.

He said he would vote in favor of Powell, Brainard and Jefferson but said Cook “has not demonstrated to me that she has experienced enough in economic and monetary policy for an appointment to the Fed”.